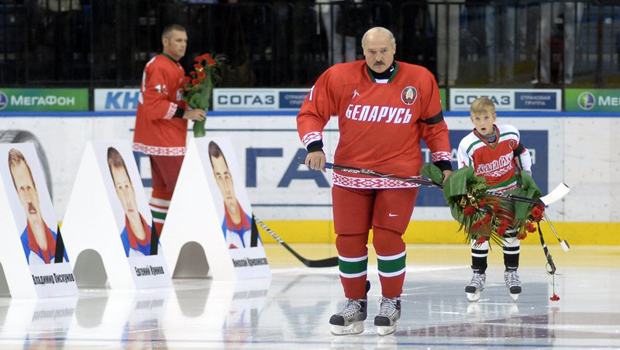 Authorities in Belarus have been targeting human rights activists ahead of this weekend’s start of the International Ice Hockey Federation’s world championship in Minsk.

At least 17 political and civic activists were detained between 26 April and 6 May to prevent the organising of protests during the championship, which begins on 9 May. Another five are either in detention or being sought for questioning by police. All have been accused of minor hooliganism and sentenced to administrative detention of up to 25 days.

Such “preventive arrests” are common in Belarus. One of the activists, Pavel Vinahradau, who is known for his numerous detentions, opted to leave Minsk until the end of the championship. He had previously been summoned by the police: “They made it clear that either I go to Berezino (a small town 100 km outside Minsk) till 3 June, or I go to Akrestsina (a detention centre in Minsk). I choose Berezino,” Vinahradau wrote on Facebook.

A website called Totalitizator asks its visitors make predictions about which activists will be detained next, for how many days and on what charges. For people who follow political news in Belarus it is not difficult to make a choice.

Potential foreign “troublemakers” are also being kept away from the tournament. On Wednesday, Martin Uggla, a human rights activist from Sweden, was denied entry to Belarus when he was detained at Minsk-2 National Airport. According to temporary visa-free travel requirements, hockey supporters with valid game tickets do not require visa. Despite the fact Martin had one, border guards told him he was being prohibited from entering the country.

Belarus’ president Alexander Lukashenko is known for his love for hockey – and his unfulfilled desire of a real international profile. Consistent tensions with the Western democracies and an unwillingness to ease his authoritarian grip has deprived Lukashenko’s international relations of impact. Fifty-six of the president’s last 100 international visits were to Russia and Kazakhstan, though he has travelled to Turkmenistan, Venezuela, China and Cuba, as well.

The ice hockey championship in Minsk is set to become Lukashenko’s marquee performance on the world stage. That is why the government is rounding up activist voices. Lukashenko wants to present a calm, hospitable and prosperous country led by a wise and caring leader. The picturesque façade cannot hide the problems afflicting Belarus: An unsustainable economy hooked on huge Russian subsidies and a dismal human rights record.

Belarus remains the only country in Europe that still imposes the death penalty. On 18 April, 23-year-old Pavel Sialiun was, according to reports, executed. Sialiun’s case is still under review by the UN Human Rights Committee.

Nine political prisoners are still in jail in Belarus, including well-known human rights defender Ales Bialiatski, and former presidential candidate Mikalay Statkevich. A recent report by FIDH says they are in a critical situation. Many dissidents suffer regular restrictions to “their means of support, quality of food and medical assistance”, including being deprived of meetings with relatives and subject to limits on correspondence.

“Politically motivated persecution of civil society representatives and of the opposition is a general trend, and the limitations on political and civil rights of Belarusian citizens are pervading, both in national legislation and in practice,” says another statement by 12 human rights groups that represent the ice hockey championship participating countries.

But people who raise these issues are not welcome in Minsk these days. Even foreign journalists who are accredited for the championship are obliged to receive a separate accreditation at the Belarusian Foreign Ministry if they wish to cover issues other than hockey while in Belarus.

But many in the country fear the real issues to cover will appear after the championship is over on 25 May.

“Putin invaded the Crimea four days after the Sochi Olympics. Let’s see if Lukashenko will be that quick with another clampdown on civil society. But I am sure he will settle all accounts with us after the championship,” a leader of one Belarusian NGOs told Index in Minsk last week.

Next year, the country will vote in the presidential election. So there is more ice to come in Belarus after international hockey is gone.

An earlier version of this article specifically stated that both Ales Bialiatski and Mikalay Statkevich have been deprived of meetings with relatives and subject to limits on correspondence. While this may have been true in the past, we have not been able to confirm that this is currently happening to the pair.

This article was posted on May 8, 2014 at indexoncensorship.org

One response to “Hockey championship in Belarus: Lukashenko puts activists on ice”