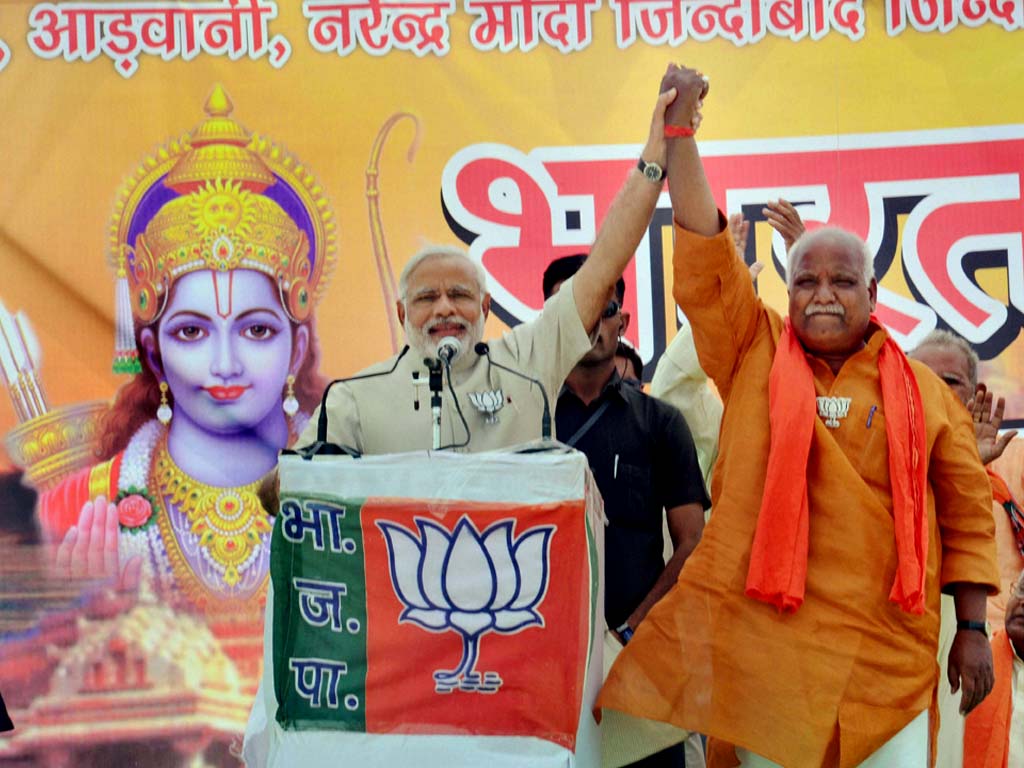 Modi invoked Lord Ram while addressing a meeting in Faizabad, barely six kilometres from Ayodhya. He shared the stage with the Faizabad candidate Lalu Singh who was issued a notice by the EC for displaying religious portraits.

“The Ram- Rahim ideal and the secular ideology are often the stuff of an Indian politician’s election haberdashery, not his soul-stuff.” Justice Krishna Iyer of India’s Supreme Court was scathing in his criticism of those electoral candidates who canvass votes in the name of religion or by instigating polarisation among different religious and ethnic communities. Besides violating India elections law, they also damage the country’s secular fabric.

The law is Section 123(3) of the Representation of the People Act, which deems candidates’ or their agents’ appeal for votes on the basis of religion or religious symbols as a “corrupt practice”, and if found guilty, entails disqualification.

On May 6, while campaigning for Lalloo Singh, the Bharatiya Janata Party’s (BJP) candidate from Faizabad, Narendra Modi, with the picture of Ram, a mythological king of ancient India, revered as a god by the Hindus, adorning the background, promised to bring about “Ram Rajya” (kingdom of Ram) if voted into power. The Election Commission was quick to order an investigation for a violation of the election law as well as the Model Code of Conduct–a set of guidelines which aren’t legally binding.

As it has become de rigueur for a Hindu Right party like the BJP, bellicose arguments about violation of the fundamental rights to freedom of religion and freedom of expression were relentlessly trotted out.  The truth is quite different, because the Supreme Court has held that the restriction on religious electioneering doesn’t impinge upon any such right.

When the constitutional validity of Section 123 (3) was challenged in 1954, a bench of five Supreme Court judges while upholding the provision held that it does not prevent a man from speaking and merely prescribes conditions which must be observed if he wants to enter parliament.  The right to contest an election is not a common law right but a special right created by a statute and the statutory provisions have no bearing on the fundamental rights.  Then when a similar challenge was mounted again in 1965, the court affirmed its earlier decision and stated that the law acted as a wedge against the secular, democratic process being vitiated by bigotry and violence. It must be mentioned that both these judgements hold ground to this day.

Going back to Modi’s speech, take a look at the photograph, and some more facts. “Ram Rajya”, which the BJP so desperately tried to pass off as a moniker for good governance, is an exclusive Hindu term, and no one professing any other faith would ever use that expression.  The setting in which the speech was delivered makes Modi’s actions all the more egregious. He was speaking at Faizabad in Uttar Pradesh, which is only a stone’s throw away from Ayodhya, which has attained permanent notoriety for the site of the demolition of the Babri Mosque in 1992 by hordes of militant Hindus swearing fanatical allegiance to the BJP and its associated parties.  In fact 6 December 1992 marks that watershed moment when communalism became an inalienable and vicious part of Indian politics. Things have only slid downhill from there, and who can forget the carnage in Gujarat in 2002 (under Narendra Modi’s watch)?

And the fact that Lalloo Singh is one of those arraigned as accused for razing the mosque to the ground leaves no one in any doubt as to Modi’s real agenda- to whip up Hindu communal passions and garner as many votes as possible.

Modi’s increasingly strident bigotry has bared its fangs open in the last lap of the election campaign. Only on May 5, he tried to charm his Uttar Pradesh supporters by thundering that only those who worship Durga–a Hindu goddess–are true Indians, and all Muslim migrants will be deported once he came to power.

It remains a mystery and one of grave consternation as to why the Election Commission finally went easy and took no action. But a fitting reply to the last Modi apologist would be -the promise of building a Ram temple over the pulverized mosque occupies pride of place in the BJP’s election manifesto.

This article was posted on May 15, 2014 at indexoncensorship.org