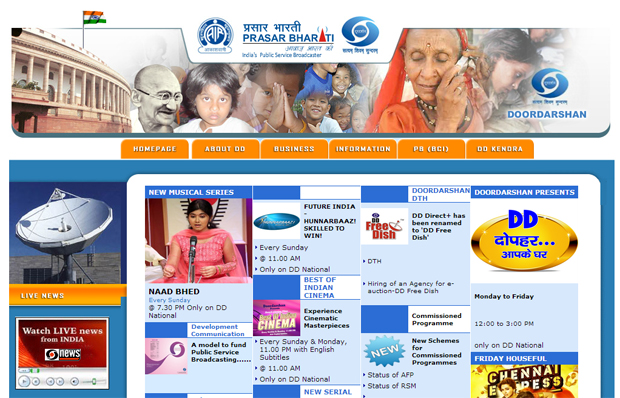 The India media is the subject of the news yet again. This time though, the private news channels — the usual suspects – are only reporting the news. Instead, the latest war of words among politicians has thrown the public service broadcaster, Doordarshan, into the limelight.

Narendra Modi, prime ministerial candidate for the Bharatiya Janata Party (BJP) was interviewed by Doordarshan, and it appears that comments he made about a friendship with a senior member of the ruling Indian National Congress were edited out of the final interview. The news broke on social media, and immediately the channel was accused of censoring the statements that might make Congress seem too chummy with their sworn opposition.

The CEO of Doordarshan, Jawhar Sircar, in a letter to the board of Prasar Bharti, the autonomous body that runs the channel, made it very clear that the public broadcaster does indeed suffer from government interference. Reportedly, Sircar wrote in his letter that there has been a lost opportunity to convince a “young minister to break this long traditional linkage between the ministry and the News Division, which has continued unabated long after Prasar Bharati was born and assigned its distinct role in 1997”. This is a direct reference to the current Minister of Information and Broadcasting, Manish Tewari. In the same report, carried by the Economic Times, a member of the Congress have rubbished this claim, saying that Sircar is “merely currying favour with the new dispensation as he had never raised the issue of autonomy earlier”.

Narendra Modi interview isn’t the first time Sircar has brought up the question of autonomy for the broadcaster. Sircar’s personal website carried news items relating to “freeing Prasar Bharti from government control”, papers that suggest DD could follow the BBC’s annual license fee model, as well as older news items about how the channel, under the Congress-led UPA government has previously neglected to give Narendra Modi the kind of airtime the private channels have accorded. For his part, Minister Tewari has made a statement that “autonomy of Prasar Bharti is guaranteed by an act of Parliament. I&B ministry has an arms length relationship with Prasar Bharti”.

One can be sure the complaints about airtime will be flipped around if another party forms the government. Therefore, politics aside, the basic question needs to be addressed: despite an autonomous status, does the government in fact wield undue influence over Prasar Bharti (which includes radio as well)?

The current structure of the public broadcaster stands as such: the Prasar Bharti is an autonomous body that answers to the Parliament of India through the Ministry of Information and Broadcasting. All of its staff are officers recruited through the Union Public Service Commission, and are transferred to their positions at Prasar Bharti after having served in other government departments. There is belief that this might be the reason for the “government” mindset shown in the two directorates under the body; All India Radio or Akashvani, and Doordarshan, the television broadcaster. In fact, till 1997, both had been directly under the Ministry of Information and Broadcasting, but had been given this separation to be able to function in a “fair, objective and creative manner”.

The government had appointed a committee under Sam Pitroda, a man who is credited for helping Prime Minister Rajiv Gandhi bring the telecom revolution to India in the 1980s, to present a report on the function of Prasar Bharti. The report batted for more autonomy for the broadcaster, but went further and suggested that it also be open to use private sources of funding and monetizing its assets. In an event to release the report, Pitroda said that the broadcaster must “look at public interest and not just government interest”. Along with input on technology, human resource and content, the two volume report (which had the current CEO as a member) also delves into government and organisation. The suggestions include transferring complete ownership and management of assets to Prasar Bharti to make the organisation administratively and financially autonomous of the government, and setting up a regulatory body to ensure public accountability of all content on their radio and television networks, while acknowledging that the state does have a distinct requirement to “broadcast messages and accomplishments of public interest which can be met by using existing public and private broadcaster infrastructure”.

The report was submitted to the government in February 2014, and is “under consideration”. It will be up to the next government, to be formed in mid-May, to take action, especially in light of the recent controversy.

Not all are convinced of real change taking place on the ground. In editorial a few months before the report was released, the Pioneer suggested that “the Government supports the idea of an autonomous public broadcaster, in practice it has never been able to let go. Unless this fundamental dichotomy is resolved —either the Government gives up control or relinquishes the autonomy idea — the Government will continue to have a complicated relationship with Prasar Bharati, no matter how many expert committees it sets up. In the meantime, the tax-payer-funded broadcaster will continue to drain the exchequer and be of even less use to the public.” Others, such as media analyst Sevanti Ninan of The Hoot even questioned the genuine interest the government has in reforming the broadcaster by initiating the Pitroda expert committee, asking: “I don’t know why they are undertaking this just before the elections time because if there are radical recommendations there is no time to implement them.” In an article on the subject she addresses the crucial question of attracting talent, writing that “to attract the best personnel the salary/ package should be linked with the market compensation. The tenure of full time members should be for a period of five years and for the Independent Directors for a period of three years. So, no more pegging salaries at a level that only attracts applications from former government personnel. The CEO of Prasar Bharati so far, in its 16 years of existence, has always been a former IAS officer.” There are also serious updates needed in technology upgradation, content and presentation of the news.

For the moment, Doordarshan is thinking about probing into the matter of the edited Narendra Modi interview. But the larger problem cannot be solved on a case-to-case basis. Since 1996, Pitroda’s would be the fourth panel the government has created to look into this issue of Prasar Bharti. It would well be worth the effort for a new government to give the public service broadcaster to the public.

This article was posted on May 9, 2014 at indexoncensorship.org