Dramatic performances cannot be policed and subjected to pre-censorship 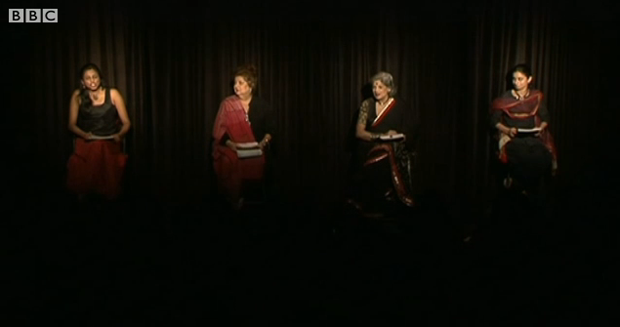 The Vagina Monologues performed in Mumbai in 2013 (Photo: BBC News)

“If Chennai doesn’t have vaginas, it is full of a#*holes!” quipped Mahabanu Mody Kotwal in the opening act of The Vagina Monologues when it was staged in Mumbai. The veteran theatre actor and director had good reason for using the pun. In December 2010, when the play was to be staged in the city for the first time, the Police Commissioner played spoilsport at the eleventh hour and declined permission. Earlier this year, a play on the Partition of India wasn’t allowed to be staged in Bangalore, and yes, Chennai. In both cases, it was the police which called the shots in the cancellations. Theatre’s subversive and liberating potential is renowned, and governments the world over have never held themselves back from wielding the censor’s bludgeon, but in India, it is the police which has been vested with remarkably sweeping powers to crack down on theatrical performances.

However, Chennai’s travails might well be over because in January this year, the Supreme Court struck down those provisions of the legislation – The Tamil Nadu Dramatic Performances Act, 1964 which permitted the cops to be the sole arbiters of “suitable” drama in the first place.

The roots of this legislation go back to the days when India was under British rule and the colonial administration remained constantly paranoid about “the natives” being up to mischief. Their fears were precipitated in 1876, when a Bengali play “Neel Darpan” (A Mirror to Indigo) was staged in Calcutta and got a rousing response, even from many Englishmen. The play narrated how farmers in Bengal and other provinces were being forced to cultivate indigo, and if they refused, were meted out the most terrible of punishments. This made the livid rulers who termed the play “scurrilous”, enact a law “to empower the government to prohibit certain dramatic performances”. The stated object of this law was to “prohibit Native plays that are scandalous, defamatory, seditious, obscene, or otherwise prejudicial to public interest”. Of course, “otherwise prejudicial to public interest” was left undefined, further empowering the censors.

It was hoped that independence would free drama from the shackles of this repressive law, but the reverse happened. Different states in India brought in their own legislations to control theatre, and most of them tightened the grip more than the British ever did.

For instance, the present legislation was geared towards proscribing “objectionable” plays and pantomimes. Section 2 (1) defined “objectionable” as anything which was likely to:

(i) incite any person to commit murder, sabotage or any offence involving violence; or
(ii) seduce any member of any of the armed forces of the Union or of the police forces from his allegiance or his duty, or prejudice the recruiting of persons to serve in any such force or prejudice the discipline of any such force;
(iii) incite any section of the citizens of India to acts of violence against any other section of the citizens of India;
(iv) is deliberately intended to outrage the religious feelings of any class of the citizens of India by insulting or blaspheming or profaning the religion or the religious beliefs of that class;
(v) is grossly indecent, or is scurrilous or obscene or intended for blackmail; and includes any indecent or obscene dance.”

Thus, one is left in no doubt that the only form of ‘non-objectionable’ theatre would be bland, pantomimes extolling the virtues of mythology and religion; even then, one could never be sure, because religious sentiments in India are nothing short of a communal tinderbox.

If these antediluvian definitions weren’t enough, the police could act against the producer, director, troupe, and even the person who either owned or let out the premises where the play was to be staged. And there lurked the gravest danger- carte blanche powers of pre-censorship. Scripts of plays were to be submitted to the police for approval, and even though an opportunity of hearing was provided before the final call could be taken, it was hollow formality because the history of the legislation’s implementation proves that permission was granted only when the director or the playwright agreed to some of the mandated excisions.

In fact, the government was so unwilling to relinquish control that it told the Court of its willingness to appoint an officer to “guide the police commissioner in the cultural nuances” since literary sensibilities aren’t usually policemen’s forte!

The Supreme Court has broken the police’s stranglehold in Tamil Nadu; the time is ripe for challenging similar laws proscribing dramatic performances in other states and restoring to theatre the freedom it always deserved.

This article was posted May 27, 2014 at indexoncensorship.org