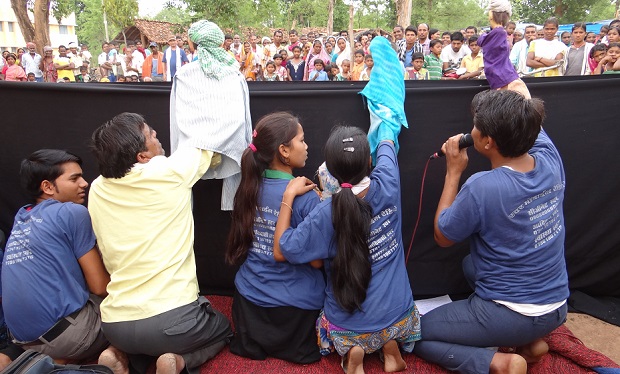 Three months after winning the Index Digital Activism Award for his work with CGNet Swara, Shubhranshu Choudhary spoke to Index about his most recent project, teaching rural villagers through performing arts how their mobile phones can be used to report incidents and issues that may otherwise be given the cold-shoulder by the authorities.

CGNet Swara (Voice of Chhattisgarh) is a mobile phone service that allows citizens to upload and listen to reports in their local language without the need for a smartphone or an internet connection.

The new experiment, as Choudhary referred to it, ran for a month, from 15 May to 15 June, and included volunteer artists performing in market places and villages in six of India’s 29 states. During this time the average number of daily reports jumped from 500 to 800, although, as Choudhary pointed out, it is too early tell if this was just an anomaly.

The team involved flipped their conventional method of teaching on its head. Previously, rural people were brought to the cities where they sat in classrooms and lectured about how to use the service. By physically going to the villagers instead, CGNet Swara has “reversed the order”, now teaching people in a way that makes them feel comfortable.

“We have made dance, we have written songs about our work, we have made a small drama, and there are characters that are puppets,” Choudhary told Index. “So in an entertaining way we try to tell them the problems with current mainstream media, which everyone should have equal access to, but unfortunately is owned and controlled by a small number of rich people.” This has resulted in a media full of information about the rich, according to Choudhary, with 80% of the population only receiving about 20% news coverage.

Between five and six million people speak Gondi in the six states CGNet Swara has visited, but they lack their own communication platform, with no radio station, newspaper or TV channel available in the Gondi language. CGNet Swara allows people to report incidents and get their voices heard when they might otherwise have been shunned.

Choudary was clear to point out that the people for whom this service is most vital are not uneducated, but rather a huge number of them live in rural areas and “feel more comfortable listening and speaking rather than reading and writing”. In a country where most Indians don’t have access to the internet but over 70% have access to a mobile phone, services like CGNet Swara play a pivotal part in giving the majority of the population a voice.

So how does CGNet Swara work? The programme allows people to phone in reports in their native language to the service, where they are then verified, translated and made available for playback online as well as over the phone. This is where urban activists come in to play. As Choudhary told Index, these are the people with the connections to the authorities, who speak the right language and can help getting these issues and problems solved. They complete the circle.

After the apparent success of last month’s trial period Choudhary is keen to continue with the project. “From what I gather from everyone, everyone’s pretty excited, but we will need some funding to continue it.” He told Index the project is not cheap to implement but “we are pretty convinced this is the way to reach these people.

Listen to the full interview with Shubhranshu Choudhary below.

This article was published on June 18, 2014 at indexoncensorship.org