In recent months, 150 suspected homosexuals have been arrested and detained, while reporting by pro-government media has further fuelled prejudice against gay people 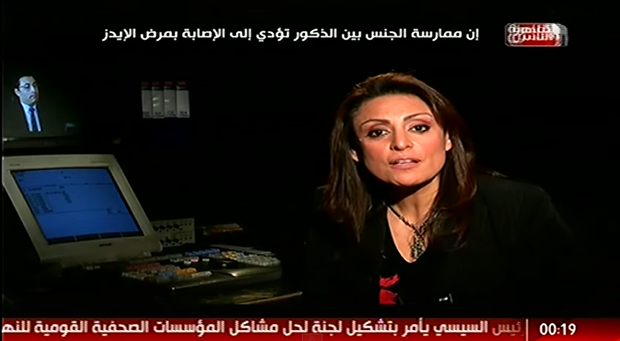 Lawyer Samir Sabry, notorious for filing legal complaints against opposition activists, filed a lawsuit against Abul Naga accusing him of “treason” and “inciting anti-government protests”. In a telephone interview with the Egyptian privately-owned satellite channel Sada El Balad, Sabry said “those who go against the will of the people who elected El Sisi, must be punished”.

Abul Naga’s prosecution reflects the growing intolerance in Egyptian society and the persistent intimidation of dissenters since the ouster of Islamist President Mohamed Morsi some eighteen months ago. Since the military takeover of the country on 3 July, 2013, anyone expressing a view that runs counter to the official narrative is labeled a “traitor” and a “spy” by supporters of Egypt’s military-backed regime.

Even more disturbing than the criminal charges faced by Abul Naga is the barrage of insults hurled at him by government loyalists in the media who poked fun at the actor’s alleged sexual orientation.

“Why do you sleep on your stomach and not on your back?” the controversial TV presenter (and owner of Faraeen Channel) asked, adding that there must have been a reason why Abul Naga was exempted from military service.

Mazhar Shaheen, a pro-government cleric who presents a talk show on a privately-owned satellite channel, also scoffed at Abul Naga, suggesting that he leave the country.

“If you are not happy with the military’s performance, you should go to either Syria or Iraq,” he said, addressing Abul Naga.

“But watch your pants while you are there,” he sarcastically warned.

Abul Naga’s lampooning by the pro-government media reflects the shrinking space for free expression in today’s Egypt. It also highlights the increased vulnerability of and continued discrimination against the LGBT community in Egypt’s deeply conservative society.

In recent months, Egypt’s gay population have increasingly been targeted amid a brutal crackdown that has seen 150 suspected homosexuals arrested and detained since November. While Egyptian law does not expressly ban homosexuality, gay people are frequently charged with “debauchery” and detained. Muslim scholars and prosecutors have condoned the arrests, arguing that “homosexuals are shameful to God” and that “it is the government’s duty to protect morality” — a conservative view that is widely shared by the Egyptian public. A Pew survey conducted in 2013 found only three per cent of Egyptians accept homosexuality.

While disdain for homosexuality is not new in Egypt, inflammatory reporting by Egypt’s pro-government media has in recent months further fuelled prejudice against gay people and deepened the stigma associated with homosexuality.

Iraqi unashamedly posted pictures of the half-naked men on her public Facebook page. The images were removed a couple of hours later after she was lambasted by rights activists enraged by what they described as her “insensitivity” and “flagrant intolerance”. Defending her actions in a Facebook post, she insisted that the bathhouse was a “hotbed of immorality” and was “helping spread HIV and AIDS in Egypt”.

Despite the outpouring of horror over the bathhouse raid on social media networks, Iraqi’s episode was broadcast to “mark World AIDS Day and spread awareness about the causes of HIV and AIDS in Egypt” — according to Iraqi.

The 26 men who were arrested were charged with “debauchery” and subjected to intrusive anal checks to determine their sexuality. Human Rights Watch has decried the anal examinations, describing them as being in violation of “international standards against torture“. The forensics report claimed that two of the 26 defendants may have been subjected to rape as signs of struggle were evident on the bodies of the men in question. At the trial last Sunday, defence lawyers argued however, that it was almost impossible to verify whether the men had indeed practiced homosexuality. They also slammed the decision to allow Iraqi to film the arrests, describing the move as “unconstitutional”. Denouncing the arrests, they said it was only natural for the men to have been naked “for they were either in the shower or the steam bath when police stormed the premises”. Khaled Naqash, one of the defence lawyers meanwhile, claimed his client had been fully dressed but was stripped naked by the police before his arrest. The defendants’ families were barred from entry into the courtroom and complained they were “ruffled up” by security guards who had apparently already condemned the defendants even before the verdict has been pronounced. The trial has been adjourned until 12 January when the fate of the men will be decided.

The latest mass arrests are reminiscent of the 2001 so-called “Queen Boat raid“, when security forces stormed a floating nightclub moored on the Nile in Cairo’s affluent neighbourhood of Zamalek, arresting 52 men. That incident sparked international outrage and condemnation and sent a chilling message to Egypt’s LGBT community. Rights advocates say the latest arrests are even more disturbing than the Queen Boat incident as they show media colluding with the police instead of holding security forces to account for their actions.

The bathhouse raid also comes hot on the heels of similar raids on gay hangouts in Cairo in recent months including cafes, bars and even private house parties. In March last year, four men were arrested in a raid on a house party after police allegedly found the men dresses in women’s clothing. The men were accused of “debauchery” and sentenced to eight years in prison. In September, a video of an alleged “gay wedding ceremony” posted online prompted the arrest of another eight men including the alleged “gay couple” who were seen in the video exchanging rings and hugging. While all the men had reportedly tested “negative” for homosexuality, they were nevertheless, sentenced to three years in prison each. A Cairo appeals court later reduced the sentences to one year in prison. The court also ruled however, that the men would remain under police surveillance after completing their jail terms. Last Sunday, El Youm El Sabe’ reported that two men were arrested in Alexandria by “morality police” and charged with “debauchery” and “destroying public morals”.

“I no longer feel safe,” Karim, a 26 year-old Egyptian homosexual told Index. “Egypt has never been safe for us but things are worse now under the military-backed authorities because we know we are being targeted.” He explained that the current regime was trying to woo the conservatives in the society by “appearing more Islamist than the ousted Islamist regime”.

“I’m always looking over my shoulder now and constantly live in fear,” said Mohamed, 32, another member of Egypt’s LGBT community. “I would leave Egypt if I could.”

For Mohamed and other gay people in Egypt, what is even more worrying than persecution and prosecution is the humiliation and shame they may bring onto their families if their identities were revealed — as has happened with the defendants in the recent bathhouse case.

“Now that the media is aligned with the police, we are at serious risk of public defamation and loss of dignity,” he lamented.

“What is even sadder is that few Egyptians are denouncing the arrests of gays as some media are telling the  public that homosexuality is a disease that will destroy public morality and hence, it is necessary to rid the society of the scourge,” he added.

Buthayna Haleem ( her name has been changed to protect her identity) an Egyptian lesbian writer is one of the few people in Egypt condemning the raids.

“It is not something that concerns others,” she told Agence France Press in a recently televised interview. “This is oppression against people.”

This article was published on 6 January 2015 at indexoncensorship.org