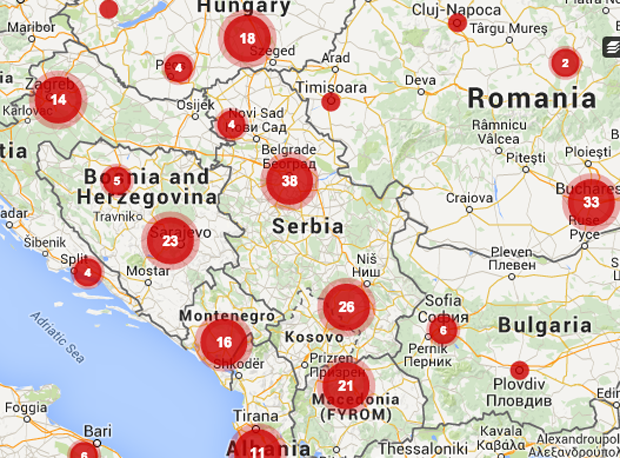 Working as a professional journalist in Serbia is hard. Being one in the country’s inland is even harder. Out of the 58 verified incidents involving Serbian media outlets and professionals reported to Index on Censorship’s European Union-funded Mapping Media Freedom, 30 have occurred outside Belgrade; the country’s political, economic and media capital. Four of these incidents have been directed at Juzne Vesti staff.

Launched in 2010 by journalist Predrag Blagojevic, Juzne Vesti is an independent news site based in Nis, a town of 257.000 in southern Serbia. In just over five years, its journalists have been subjected to verbal harassment or death threats 15 times. Though they have reported the incidents to local authorities, it has not resulted in convictions.

“Nobody has been found guilty and punished for the threats,” Blagojevic, who is also the site’s editor-in-chief, told Index.

According to Blagojevic, the main obstacle to punishing those threatening journalists comes from the prosecutor’s office. While he is quick to complement police in the town for their professional and timely investigations, he blames prosecutors for failing to act on the evidence by filing indictments quickly.

“In two situations from four to six months passed from the time the police filed a criminal charge to the prosecutor’s indictments,” Blagojevic explained.

Juzne Vesti correspondent Dragan Marinkovic from Leskovac received threats on Facebook after he published an article about the death of a woman, in which he questioned the treatment provided by a paramedic. He reported the incident to authorities. Several months later prosecutors decided not to pursue the case, arguing that “you deserve a bullet” is not a threat.

In March 2014 Blagojevic was threatened by the owner of a local football club, yet prosecutors waited until late September to indict the main suspect. The first court hearing was scheduled for December 2014; the next one at the end of this month.

While such delays are frustrating, once in court, judges have taken some dubious positions, Blagojevic said. In one case, the court said that “be careful what you write” or “do not play with fire” were not threats, but words that “merely showed the seriousness of the topic”. In another instance, where the perpetrator asked a Juzne Vesti staffer “Will you be alive in the morning if you wrote something like this in the USA?”, the court said that “the inductee, by placing the action in the foreign country, shows that he is aware that murder is prohibited by Serbian law”.

Outside the legal system, there is another obstacle to independent journalism in Serbia: money. While the Serbian government pays for advertising space, most of the earmarked money is directed at the national press. At the same time, the number of successful companies outside Belgrade and Novi Sad are few, and those that do thrive in the Serbian inland are usually aligned with local political figures. That leaves a tiny pool of advertisers.

“In these circumstances we are left with only very small companies, which are connected with political parties or dependent on municipal budgets. The game is straightforward — only if you are good to us you will get money,” Blagojevic said.

In an interview with SEEMO, Blagojevic described situations where certain media outlets have been financed with taxpayers’ money. With this line of funding, competing outlets are able to offer low rates that distort the advertising market, which puts pressure on independent media to drop their rates.

“The local government in Nis sets aside hundreds of millions of dinars in payment for these PR services,” Blagojevic said. The money is sometimes up to 80 per cent of the budget for these outlets making it even more difficult for independent media to compete.

The Council of Europe’s recent report on the Serbian media situation addressed the issue: “Instead of making efforts to create non-discriminatory conditions for media industry development, the state is blatantly undermining free market competition.”

The last issue confronting Juzne Vesti staff is one that will be familiar to small town journalists around the world — everyone knows everyone. Blagojevic tells of having to convince one journalist to file a complaint because she knew the person who had targeted her. She was reluctant because she had known the person “since they were kids”, he said.

From Blagojevic’s point of view, the toxic mix of money, political pressure and indifference from the courts causes self-censorship among journalists.

“The language from the 90s is back in Serbia. Again, journalists that criticise the work of the government or are reporting on corruption are labelled as foreign mercenaries. Threats like this come from the mouths of the highest state representatives,” he said.

An earlier version of this article stated that Nis has a population of 184,000. The latest census puts the figure at 257.000.

This article was posted on March 27, 2015 at indexoncensorship.org

One response to “For Juzne Vesti editor, Serbia’s deteriorating media freedom comes as no surprise”