Tamas Bodoky: The independence of journalism in Hungary is under threat

Hungarian journalist Tamás Bodoky founded investigative news website Atlatszo.hu, winner of the 2015 Index on Censorship Freedom of Expression Award for Digital Activism. He spoke at the ceremony in London on 18 March

Hungarian journalist Tamás Bodoky founded the investigative news website Atlatszo.hu to promote a free press in Hungary, a country where journalists and news organisations face recently introduced media taxes, a proposed internet tax for citizens, smear campaigns and police-run office raids. Bodoky has brought together a range of crowd-sourced approaches to empower citizens in the face of this deteriorating situation for human rights, including tools to allow for anonymous reporting of corruption, to help investigate freedom of information requests (and refusals), and MagyarLeaks, a Tor-based whistleblowing service. Last year Atlatszo.hu was put on the government’s NGO blacklist, but Bodoky continues to run the site, as well as workshops to help keep investigative journalism in Hungary alive. He is the recipient of the 2015 Index on Censorship Freedom of Expression Award for Digital Activism.

Atlatszo.hu is calling on all those who believe that the independence of journalism in Hungary is under threat. All those who agree that politics and business interests have sunk their claws into everyday life. All those who know that taxpayer money is vanishing. We are calling on you to help us let the world know the truth.

Almost four years ago Atlatszo.hu pledged to tackle the uphill battle represented by these challenges.

As a watchdog NGO for investigative journalism, we set out to promote transparency and freedom of information in Hungary.

We are only a small group of journalists, lawyers and IT-specialists. But since the beginnings we have won more than 60 percent of FOI lawsuits we initiated. In fact we have been so successful in the courtrooms that in 2013 the governing majority introduced a bill to curtail FOI legislation which was dubbed “Lex Átlátszó” by the Hungarian press.

Looking back to 2011, when Atlatszo.hu was founded, I remember that many journalists dismissed the effort and were quite sure it wouldn’t last. We ignored these critics. We were confident that this was the way to go; to position ourselves outside the mainstream media, and to seek out alternative communication channels — because all of the main journalistic platforms were and still are severely constrained.

In Hungary, domestic journalism has come to represent the interests of local oligarchs. Multinational media firms are busy appeasing the political and economic powers that be. The advertising sector is a powerful censorship instrument – too often used to exert pressure. And every year since we started, the situation has become dramatically worse.

Now, the ruling political elite is pushing out its full arsenal. From business regulation to media control. From forcing personnel changes to diverting media outlets by prescribing countless directions. State funded public media has been reduced to a propaganda tool.

Most recently, the Hungarian government sparked a row over the foreign funding of local NGOs. The row has escalated to the extent that even groups advocating simple environmental concerns, or campaigning against corruption, are now being targeted. The only tangible reason to be found is that the government doesn’t appreciate funding going to any organization it doesn’t fully approve of.

I look at all of this, I look at my country, and I say one simple thing. I say Atlatszo will not be defeated. Hungary can have a fair and just democracy. Yes, it still can be done. 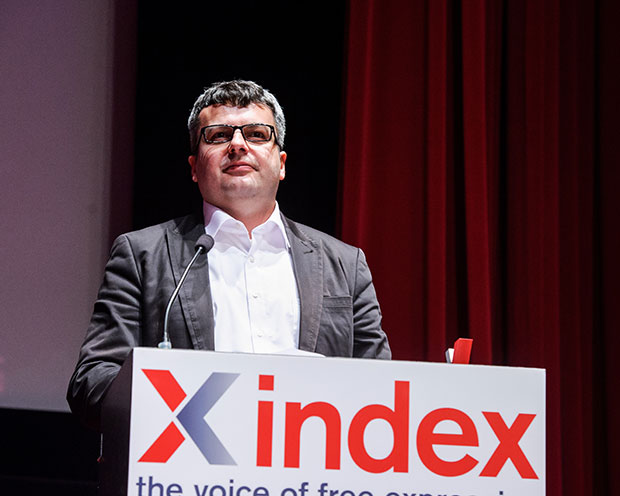 Related
• Index announces winners of 15th annual Freedom of Expression Awards
• Safa Al Ahmad: Facts are a precious commodity in Saudi Arabia
• Rafael Marques de Morais: I believe in the power of solidarity
• Amran Abdundi: This award is for the marginalised women of northern Kenya
• El Haqed: I will fight for freedom, equality and human rights for ever
• Special Index Freedom of Expression Award given to persecuted Azerbaijani activists and journalists
• Video: Comedian Shappi Khorsandi hosts Index on Censorship awards
• Drawing pressure: Cartoonists react to threats to free speech