El Haqed: I will fight for freedom, equality and human rights forever

Moroccan rapper and human rights activist Mouad “El Haqed” Belghouat, winner of the 2015 Index on Censorship Freedom of Expression Award for Arts, spoke at the ceremony in London on 18 March

Moroccan rapper and human rights activist Mouad “El Haqed” Belghouat (roughly translated as “the enraged”) has not only seen his songs censored and his album banned but has also been imprisoned three times since 2011 – including a one-year jail term for lyrics critical of the police in his song Dogs of the State. Imprisoned for four months in 2014, after seeing witnesses at his trial stopped from testifying and key pieces of evidence barred, El Haqed continues to make music about endemic corruption in the Moroccan state and widespread poverty in his country. He is the recipient of the 2015 Index on Censorship Freedom of Expression Award for Arts.

I take this opportunity to thank you for this honour, especially Helen and David for everything they did for me to obtain my visa to be here today among you. And I can’t forget the many people who believe in my case and helped me through since I was jailed for the first time in 2011. I’m sorry that I can’t reveal more names but I will remember you forever.

While I was writing this speech, I didn’t know yet if I would be able to join you or not — because so often my visa applications have been refused. I hope future generations will have more freedom to travel without obstacles — because the earth belongs to us and we belong to it.

I’m very honoured by this nomination and I dedicate it to the soul of my mother and to all people who were prisoners, or are right now still incarcerated, or will be prisoners in the future because of their mere thoughts or opinions.

I was jailed three times because of my opinions. It would take a long time to speak about each arrest, so to make a long story short, just a few words on why they arrested me each time:

The first time: because of my activities in 20 February movement. We were asking for freedom, equality and democracy.

The second time: because of a song that someone else uploaded to YouTube three years earlier. It doesn’t make sense at first, but it does when you realise that it didn’t allow me to finish the album I was working on.

The third time: the same old story. I was going to a stadium and they arrested me because I continue to refuse to change my positions.

I have been through difficult times: I was jailed, fired from my work, rejected by many friends. I am still forbidden to sing in my own country. But after all that I am still determined that I will never change my position. I will fight for freedom, equality and human rights for ever.

Right now, as we celebrate, there are a lot of people behind bars because of their opinions. I hope for freedom for them really soon.

Freedom of expression is your arm. Lift it to fight for dignity and equality. Even if they kill us or jail us they cannot do the same with our thoughts or opinions. You cannot kill an idea or opinion. You cannot put it behind bars.

Thank you again everyone and have a great evening. 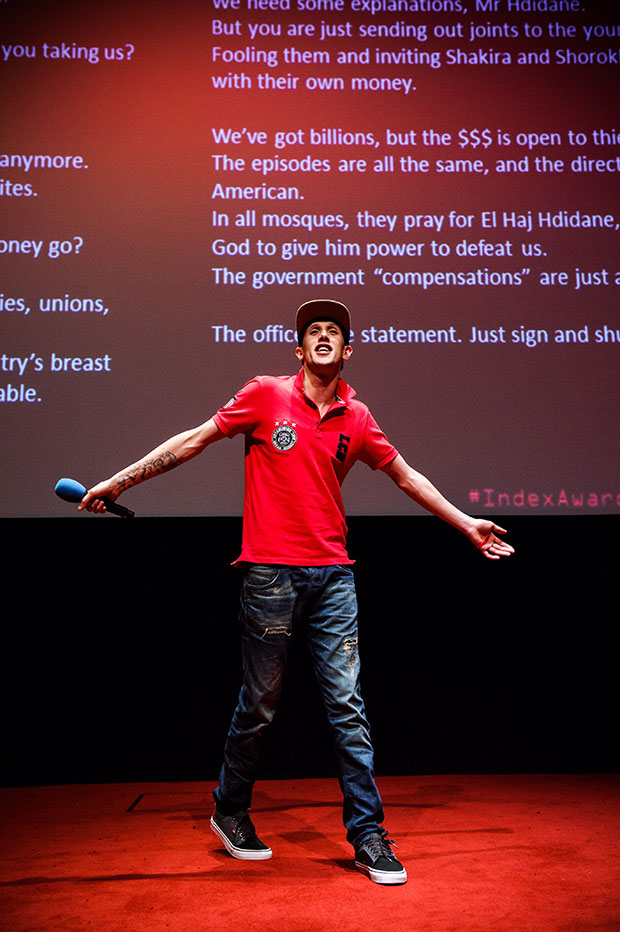 One response to “El Haqed: I will fight for freedom, equality and human rights forever”