Editor Rachael Jolley explains why the latest Index on Censorship magazine is focusing on academic freedom, with a look at current threats from around the worldwide, from Ukraine to the US 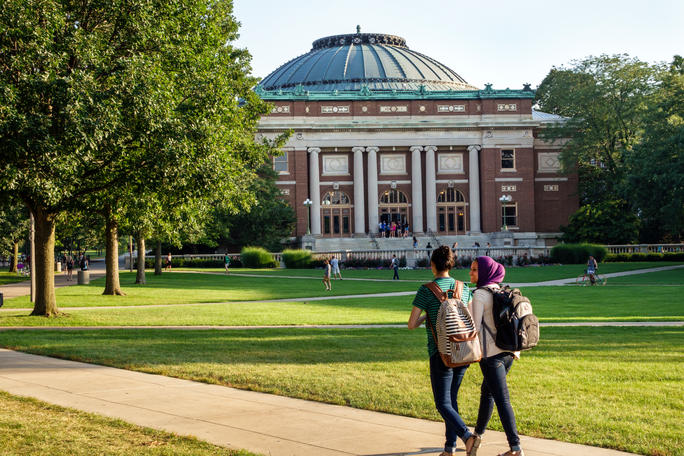 Illinois Urbana-Champaign University in the United States, where one academic had his job offer withdrawn over his tweets on the Israel-Gaza conflict. Credit: Alamy/ Jeff Greenberg

This article is taken from the summer issue of Index on Censorship magazine (volume 44, issue 2). To read the full report on academic freedom, subscribe or download the app on a free trial

The power of Arthur Miller’s play The Crucible continues to resonate in 2015. London’s Old Vic revived the play by Miller, a long-time supporter of Index, this year, and it has never seemed more chilling. As characters threw accusation and counter accusation at each other across the stage, the words felt just as relevant to the zip of the social-media age as to Salem in 1692.

In Ukraine, as our report in this issue details, attestation committees have now been set up to examine accusations by students and others that university academics might have “separatist attitudes” or have been using “provocative” speech. If found guilty lecturers can lose their jobs. This forms part of the brooding atmosphere currently hanging over Ukraine’s academic life, where former colleagues are banned from speaking to each other, and a system of national “patriotic” education has been introduced.

But Ukraine is not alone. In Belarus, a national committee acts casts a judgemental eye on any university that shows independence of spirit, or might choose to teach subjects in a way that the authoritarian government might find unsettling. And in Turkey, the nationwide YÖK committee stands disapprovingly on the sidelines, interfering in the minutiae of academic dress sense, giving orders about the wearing of headscarves and beards, as well as recently issuing a rule that academics should not give their opinions to the media, except on scientific subjects.

Around Turkey academic freedom is coming under attack from all sides, one lecturer who put a question about a Kurdish manifesto written in the 1970s on an exam paper, received multiple death threats and was accused of being “a terrorist”.

One hundred years ago the Declaration of Principles on Academic Freedom and Academic Tenure was published in the USA, a century on, university faculty are still finding that institutions disapprove of them having public opinions on political issues. While some US universities restrict freedom of expression on campuses to painted-square zones, presumably where students can cope with hearing opinions they disagree with, faculty members are expected not to be outspoken on social media, or find themselves, as in the case of Steven Salaita (detailed in the magazine), having their assistant professorship job offer withdrawn.

Universities should be places where discoveries are made. Academia is an opportunity for students and teachers to challenge themselves; their preconceptions and values, and, perhaps, head off in a new direction. Studying can be the start of something big; a new idea that might end in an enormously valuable invention such as the Large Hadron Collider; or it might just be a big moment for the individual, who discovers a fascination for medieval history, or 8th-century literature.

Education opens up all sorts of avenues of discovery, but if we start closing some of those roads off, arguing they are too dangerous, or challenging, or hold possible stress, then we are heading off in a terrifying direction. For this issue of the magazine, we found academics, authors and activists around the world were worried enough to support the following statement:

“We the undersigned believe that academic freedom is under threat across the world from Turkey to China to the USA. In Mexico academics face death threats, in Turkey they are being threatened for teaching areas of research that the government doesn’t agree with. We feel strongly that the freedom to study, research and debate issues from different perspectives is vital to growing the world’s knowledge and to our better understanding. Throughout history, the world’s universities have been places where people push the boundaries of knowledge, find out more, and make new discoveries. Without the freedom to study, research and teach, the world would be a poorer place. Not only would fewer discoveries be made, but we will lose understanding of our history, and our modern world. Academic freedom needs to be defended from government, commercial and religious pressure.”

The range of signatures from countries around the globe show just how far and wide the fear is that academic freedom is, in 2015, coming under enormous pressure.

This article comes from the summer issue of Index on Censorship magazine (volume 44, issue 2), which contains features from across the world, plus fiction and poetry by writers in exile. Subscribe or download the app (free trial) to read the magazine in full. For reproduction rights, please contact Index on Censorship directly, via [email protected]

Students and academics at 7500 universities around the globe have access to the magazine’s archive containing 43 years of articles via Sage.