This article is part of Index on Censorship's project Mapping Media Freedom which monitors media censorship in Europe. 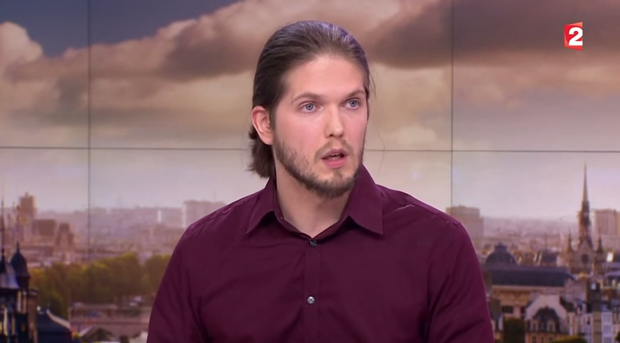 Lilian Lepère has filed a lawsuit against French media outlets for revealing where he was hiding during a standoff with the Charile Hebdo attackers. (Photo: YouTube / France 2)

Graphic designer Lilian Lepère hid under a sink for eight hours while the Kouachi brothers, Saïd and Chérif, on the run after attacking Charlie Hebdo, occupied the printing house where he worked in Dammartin-in-Goële (in the Seine-et-Marne region). Believing it was empty, the brothers hid in the factory for several hours before being killed by a special operations unit of the French armed forces.

While the designer was hiding, MP Yves Albarello (Les Républicains), during an interview with RMC radio, revealed Lepère was in the building. Television channels TF1 and France 2 repeated the information. The Kouachi brothers, who had smartphones and a radio, could have easily discovered Lepère’s presence.

French newspaper Le Parisien recently revealed that Lepère intends to sue RMC, TF1 and France 2 for revealing that he was hidden during the stand-off with the Kouachis. The newspaper reported that Lepère will contend in the suit that the media outlets put his life in danger. Last Thursday, 13 August, the Paris Public Prosecutor’s department opened an investigation.

This is not the first time French media has come under scrutiny for its treatment of the January attacks.

In February, the country’s broadcasting watchdog Conseil supérieur de l’audiovisuel (CSA) distributed warnings to TV and radio stations, noting that 13 media outlets revealed live on air that a confrontation had begun between the police and the Kouachi brothers. Considering this a “serious failure”, the CSA said that the reporting “could have had dramatic consequences for the hostages of the Hyper Casher in Porte de Vincennes”, where Amedy Coulibaly, an accomplice of the Kouachi brothers, was holding hostages at a supermarket. Coulibaly was demanding that the brothers be released. The CSA also blamed TV channels for revealing that people were hiding during the two hostage crisis that took place on 9 January.

At the time, TV and radio channels contested the CSA’s decision, writing, in a joint letter entitled “Information under threat” that, “The freedom of the press is a constitutional right. Journalists have a duty to inform with rigour and precision. The CSA blames us for having potentially breached public order or taken the risk to fuel tensions within the population. We dispute this.”

They added: “How is it possible to think that, in 2015, the CSA wishes to reinforce the control on an already regulated French broadcasting media while information circulates without constraint in the written press, on foreign channels, all social media and websites? Aren’t they placing us in a situation of inequality in front of the law?”

In a similar story that took place in March 2015, the six people who hid at the Hyper Casher, where Amedy Coulibaly killed four people, filed a complaint against an unknown person for putting their lives in danger. The complaint was directed at the media and specifically at BFMTV, Patrick Klugman, a lawyer representing the group, told Le Parisien. BFMTV revealed that a woman might of been hiding within the Hyper Casher.

“The disclosure of the presence of these people who were hiding, in the middle of a hostage crisis, is a failing that cannot remain unpunished, and all the more so because we knew that the terrorist was watching the TV channel. An information, even if it is accurate, must not put lives in danger”, Klugman said.

Speaking with Le Nouvel Obs, Christophe Bigot, a lawyer who specialises in media, explained that even if an investigation has been opened, because the story had stirred a lot of emotions at the time, Lilian Lepère’s complaint has little chance to succeed.

“The principle, when it comes to the press, is freedom of expression. It has precise limits determined by law, such as libel or the broadcasting of fake information likely to disrupt public peace. In this case, none of these limits can be pointed out. For the media, several complaints could nonetheless be an occasion to examine how to reconcile immediacy of information and ethics,” Bigot said.

This article was posted to indexoncensorship.org on 21 August 2015