NEWS
Lejla Becar: The bulk-banning of bands in Bosnia

This is the ninth of a series of posts written by members of Index on Censorship’s youth advisory board. 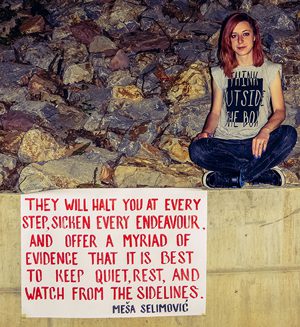 Lejla Becar is a member of the Index youth advisory board. Learn more

In 2005, the chair of Visoko municipality cancelled a concert due to be performed by Skroz, a rock band from Bosnia and Herzegovina. He justified his decision by saying that the concert and the sponsor (a famous beer brand) would be insulting for Muslims and Muslim youth.

These decisions riled up both the organisers of the events and also citizens, both Muslim and non-Muslim. One of the main organisers was Adnan Jašo Jašarspahić, editor of independent radio station Radio Q. He was to face consequences in the years to come due to his decision not to obey the chair and ignore the cancellation of the Skroz concert. It was held 15 days after cancellation.

This was not an isolated event. In 2006 Croatian band Let 3 were not allowed to perform in Travnik, a small municipality in central Bosnia. In 2008, Bosnian group Dubioza Kolektiv were banned from performing in Goražde. In the meantime, the Communications Regulatory Agency (CRA) penalised Bosnian radio station Radio 202 — fining them more than €5,000 — for playing hip-hop music on air. The agency stated it had been offensive.

The situation now? In my town, cultural events for youth are a phenomena. More and more young people are leaving, turning to radical Islam or simply living within an oppressive system without complaint. The people fighting the system were silenced. Ten years of violating the right to freedom of expression took its toll and now the government has succeeded in creating a society that is obedient, ignorant and passive.