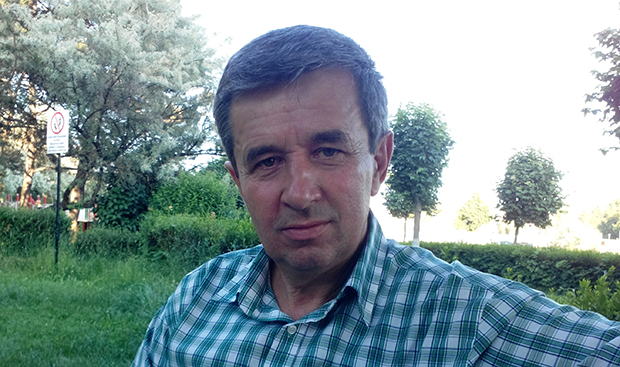 Vasile Luca, a veteran journalist working at Radio Cluj, a Romanian public radio station based in Cluj-Napoca, was fired in May 2015 as a result of a disciplinary committee hearing.

Two months before his termination, Luca, who had been with the station for 25 years, went public with internal documents showing that a station employee, Debreczeni Hajnalka, who was also the press secretary for the head of a political party, was not actually completing any work despite an unusually high salary. Luca filed a complaint at the public prosecutor’s office and, after media coverage, Hajnalka resigned from the station. The station refused to disclose what Hajnalka’s job title had been.

At the time of the resignation, Hajnalka said her role had been to coordinate media strategies, internal communication between public stations and media monitoring. She denied that she had broken any laws or acted inappropriately.

“The case of Debreczeni Hajnalka was surely not the sole reason for my dismissal”, Luca told Index during an interview. “However, after the Debreczeni scandal, there was a lot of pressure, and multiple phone calls were made because the party she works for, the Democratic Union of Hungarians in Romania (DAHR), is very influential in the upper echelons of public radio”.

Luca had a long track record of conflicts with station management. He had previously documented illegalities and misuse of public funds at the radio station. In 2010, Luca was granted whistleblower status by Transparency International Romania after he gathered evidence that Florin Zaharescu, director of the station at the time, was embezzling funds.

Luca was subjected to his first disciplinary action in January 2015. Station management accused him of being the author of caricatures of the radio station’s directors. The images were found in the office he shared with six other journalists.

“When Ovidiu Miculescu, the general director of the Romanian Radio Broadcasting Company, was showing his solidarity with the murdered editors of Charlie Hebdo at the French Embassy, editor-in-chief at Radio Cluj, Bogdan Rosca, was trying to impose disciplinary actions against me for a couple of ironic quotes and some pictures of a bristly kitten”, the journalist said.

Along with the “bristly kitten”, the disciplinary committee also weighed a private letter the journalist had written to Vasile Dancu, a local politician and sociologist. In the letter, Luca criticised Dancu for supporting Rosca, his former student, calling him “incompetent”, “unprepared” and “resentful”.

The committee also considered a letter that Luca wrote to Miculescu that criticised Rosca’s managerial performance by citing research that showed that the radio station’s audience numbers plummeted after Rosca took over in February 2014.

As a result of the hearing, Luca’s salary was cut by 10 per cent for one month.

Immediately after the first disciplinary hearing, the editor-in-chief filed a complaint against Luca accusing him of collaborating with a privately-owned television station while he was on sick leave.

“My work ended well before I took a couple of months of sick leave. Even the disciplinary committee had to admit that I had management’s approval for a one-year collaboration with Argo TV which began in April 2013”, Luca said.

Months after the series of documentaries were shot and aired, the television station uploaded the documentary onto their website. The web publication date coincided with the period Luca was on leave. He also appeared on an Argo TV talk show during his leave.

“Luca had an appearance on television as an editor he could not account for”, Attila Szász, the head of the disciplinary committee told Index. “We did not recommend he be dismissed. The dismissal was the decision of the general director”.

According to Luca, the hearing of the disciplinary committee was unlawful because he was not granted the right to be represented by a lawyer. In a written request sent to the committee just before the hearing, Luca pointed out that the exact time and place of the hearing was not set and when they finally made the decision, his lawyer was unable to be present.

Luca said he did not receive copies of the medical records used as evidence against him and, he believes, that the process did not meet standards required by Romanian labour law. As a whistleblower, Luca said, there are legal requirements for transparency that were not met. For example, the time and location of the hearings were supposed to be publicised three days in advance and members of the press should have been granted access.

He has filed a legal complaint and a judge will decide whether he has grounds to challenge the disciplinary actions.

This article was published at indexoncensorship.org on 28/8/2015