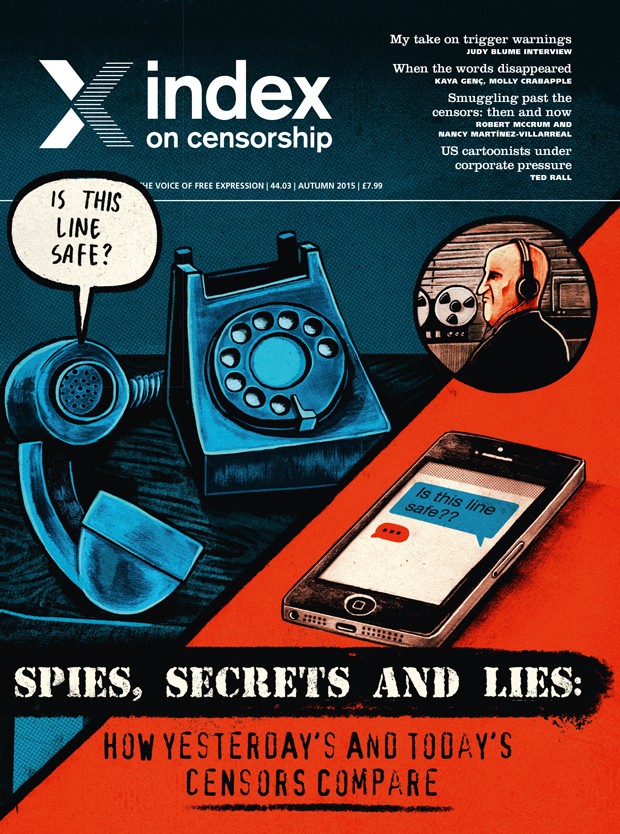 The autumn 2015 issue of Index on Censorship magazine focuses on comparisons between yesterday’s and today’s censors and will be available from 14 September.

In the latest issue on Index on Censorship magazine Spies, secrets and lies: How yesterday’s and today’s censors compare, we look at nations around the world, from South Korea to Argentina, and discuss if the worst excesses of censorship have passed or whether new techniques and technology make it even more difficult for the public to attain information.

Smuggling documents and writing out of restricted countries has helped get the news out, and into Index on Censorship magazine over the years. In this issue, you can hear three stories of how writing and ideas were smuggled into or out of countries. Robert McCrum swapped bananas for smuggled documents in Communist Czechoslovakia; Nancy Martínez-Villarreal used lipstick containers to hide notes in Pinochet’s Chile and Kim Joon Young tells of how flash drives hidden in car tyres take information into North Korea.

Also in this issue, an interview with Judy Blume on over-protective parents’ stopping children from reading, Molly Crapabble illustrates a new short story from Turkish novelist Kaya Genç, Jamie Bartlett on crypto wars and Iranian satirist Hadi Khorsandi on how writers are muzzled and threatened in Iran. Don’t miss Mark Frary mythbusting the technological tricks that can and can’t protect your privacy from corporations and censors.

There’s also a cartoon strip by award-winning artist Martin Rowson, newly translated Russian poetry and a long extract of a Brazilian play that has never before been translated into English.

Spies, secrets and lies: How yesterdays and today’s censors compare?

Words of warning – Raymond Joseph, a young reporter during apartheid, compares press freedom in South Africa then and now

Doxxed – When prominent women express their views online, they can face misogynist abuse. Video game developer Brianna Wu, who was targeted during the Gamergate scandal, gives her view

Reporting rights? – Milana Knezevic looks at threats to journalism in the former Yugoslavia since the Balkan wars

Global view – F0r her regular column, Index’s CEO Jodie Ginsberg writes about libraries; how they are vital communities and why censorship should be left at their doors

Mythbusters – Mark Frary debunks some widely held misconceptions and discusses which devices, programs and apps you can trust

Clearing the air: investigating Weibo censorship in China – Academics Matthew Auer and King-Wa Fu discuss new research that reveals the censorship of microbloggers who spoke out after a documentary on air pollution was shown in China

NGOs: under fire, under surveillance – Natasha Joseph looks at how some of South Africa’s civil rights organisations are fearing for the future

Send in the clowns – A darkly comic play by Miraci Deretti, lost during Brazil’s dictatorship, translated into English for the first time

A matter of facts – For her regular Endnote column, Vicky Baker looks at the rise of fact-checking organisations being used to combat misinformation

Take out a digital annual magazine subscription (4 issues) from anywhere in the world, £18.

Have four stunning print copies delivered to your doorstep (US and UK), £32.