NEWS
Protest around the world

As demonstrations against corruption and the failure to provide basic services sweep Lebanon, we look at how authorities deal with mass protests around the world. 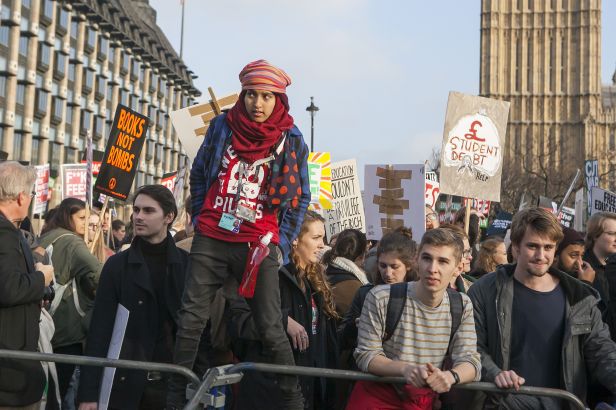 Beirut is currently witnessing a wave of protests triggered by a rubbish disposal crisis and, lacking a legal framework, the authorities are struggling to cope. The protest — dubbed You Stink by many, including former Index on Censorship Freedom of Expression Awards nominee Lucien Bourjeily — comes as waste has been allowed to build up on the streets of the Lebanese capital. You Stink has very quickly morphed into a more general protest against the way public services in Lebanon are run and corruption levels within a weak government that has been without a president since May 2014.

Thousands of protesters have taken to the streets and social media channels to voice their frustration while the Lebanese authorities have struggled to respond. One short-term solution was to build a wall between the prime minister’s office and the streets below.

Lacking a legal framework for dealing with the protest has left the Lebanese authorities alternating between ignoring the rallies and violently cracking down but neither strategy has made an impact on demonstrations that began in July. Riot police were recently drafted in to clear an occupation at the office of Lebanon’s environment minister Mohammad Al Mashnouq. In that incident, Bourjeily was hospitalised with an injured arm after police cleared the sit-in.

A report by Freedom House in 2013 found that “Freedom of assembly has been generally unrestricted (in Lebanon) in the past, as hundreds of thousands of Lebanese have rallied in favour of or in opposition to the government.” There is no precedent to arrest or disperse large numbers of people protesting against a government or rule of law. Though police have been using force to disperse largely peaceful protests, there is no fear of arrest so the movement continues.

The benign legal framework is coupled with Lebanon’s open media freedom environment. The country is one of the highest-ranked Middle Eastern states for press freedom.  Citizens can also vent their frustrations via the internet and social media with relative ease. Much of the activity that has surrounded the You Stink protests has been spawned online.

Want to know what #corruption smells like? Take a walk on #Beirut‘s streets, for as long as you can take it #YouStink #طلعت_ريحتكم #مستمرون

Wow Beirut, today #youstink – you really do. I’ve shut all the windows. The whole city reeks of garbage – and no end to the crisis in sight. — Tom Coghlanتوم کوگلن (@TomCoghlan) September 7, 2015

The chaos ensuing in Beirut contrasts with the largely peaceful mass demonstrations against the Malaysian prime minister Najib Razak, who has been tainted by accusations of corruption.

The turnout for the protests has been large despite amendments to the country’s colonial-era sedition act made in April 2015 but the threat of arrest was very real as the rally organisers of the protest Bersih 3.0 (Malay for “clean”) recently found out. Websites spreading word of the demonstrations were banned and when groups of protesters attempted to break through the barriers they were fired at with tear gas and beaten and arrested by police, often under sedition laws.

The penalties for the vaguely worded “seditious activities” have recently been increased to 20 years, changes described by the UN and Razak’s opposition as a “black day” for freedom of expression. The sedition law was also used as a legal tool to investigate up to 50 protesters in the Taman Medan region peacefully protesting against the affixation of a cross on a local church’s premises. Initially, the inspector general of police in the region stated that the demonstrators would be cleared of any wrongdoing but this was vetoed by the Home Minister and Razak, who urged police to investigate the protest under sedition and said action could be taken under the law. The case was classified as sedition and serves as an example of a growing climate of fear being emphasised by its use in Malaysia.

Another colonial-era sedition law has been used in India to target groups of protesters on a number of occasions, including 2012 demonstrations against the building of a power station in Tamil Nadu. When told they couldn’t march, thousands of demonstrators stood still to register their concerns about the health impact that the plant would have. A report by local activists after the protest found that at least 3,500 of the participants were being investigated for sedition. South Asia Human Rights Watch denounced the charges and urged the Indian parliament to repeal the law.

In an even stranger case, a charge of sedition was issued in March 2014 against a crowd of Indian students cheering for Pakistan in a one-day cricket match between India and Pakistan. The charges were eventually dropped after outrage from Jammu and Kashmir Chief Minister Omar Abdullah.

Western cities like London may not use sedition as a tool to halt protest but the authorities still find dealing with protest far easier when they are backed by a legal framework. The Public Order Act 1986 outlines the law relating to protest in the UK and makes a firm distinction between static assembly and a moving march. In order to hold a march, protesters are required to submit a permit to a police station at least six days before it takes place and the police can then impose sanctions. In this way, the authorities are able to curtail attempts by demonstrators to protest spontaneously en masse.

Even a static assembly can be sanctioned if the police believe it will cause serious public disorder, serious damage or intimidation. This was the case with the neo-Nazi protest moved from Golders Green to Whitehall in July.

An added piece of legislation, The Police Reform and Social Responsibility Act, came into force in 2011, mainly as a response to the actions of Brian Haw whose tent demonstration outside Whitehall lasted from 2001 until his death in 2011. This new act prohibits protesters from certain activities outside Parliament, preventing protesters from, among other things, operating amplified noise equipment and erecting tents or “sleeping structures”. The wording here is important. In the midst of protests resembling those currently taking place in Beirut, when British protesters “occupied” Whitehall in 2014, the phrase “sleeping structures” was used to cover all sorts of paraphernalia, with the images of protesters being forcibly removed from lying on tarpaulins and sleeping bags being etched into the minds of those observing the British press in the following few weeks. It even prompted a global hashtag, #tarpaulinrevolution.

The new act is coupled with regulations under City of Westminster bylaws stating that protesters must gain written permission before they protest in London’s Parliament Square. The UN General Assembly’s special rapporteur voiced grave concerns about these by-laws and restrictions in a report in 2013.

Protests such as those in London, Malaysia and Tamil Nadu can pictorially resemble those happening in Beirut but are far less of an issue for the authorities due to them being able to rely on a legal framework to disrupt them. In Malaysia, fear of sedition looms large over the heads of even the most peaceful of demonstrators.

For the time being, protest against the interim government in Beirut rumbles on, unabated.