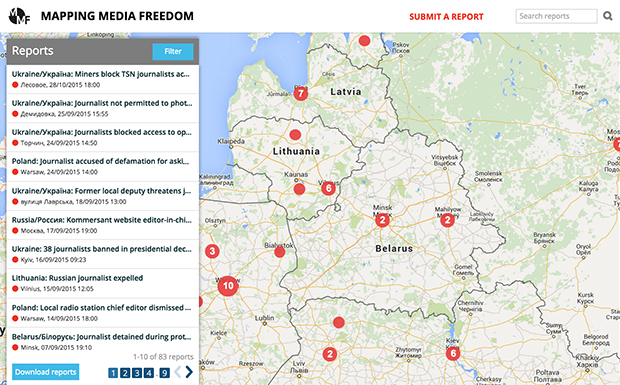 In Belarus, dozens of freelance journalists were fined between 2014 and 2015 for working for foreign media without an accreditation from the Ministry of Foreign Affairs. In a country dominated by state-run media, foreign outlets offer an alternative source of information.

Under Belarusian law, freelance journalists who co-operate with foreign media outlets are not considered legal employees of the organisation in question and aren’t entitled to receive the required accreditation. The first freelancer penalised was videographer Ales Dzianisau from Hrodna, a city in western Belarus. He was accused of illegally producing a video which ran on Belsat TV — a Polish state-run channel aimed at providing an alternative to the censorship of Belarusian television — about the opening night of a rendition of Goethe’s play Faust. He was fined €300.

Under Article 22.9(2) of the Belarusian Code on Administrative Offence, the courts can judge journalistic activities without an accreditation as illegal. In each case, the reason for the journalist having committed an offence was not the content of their work, but that they were published through foreign media.

An article published by Aliaksandr Burakou on the German website Deutsche Welle resulted in court hearings, talks at the tax office and the seizure of flash drives and computer systems. On 16 September 2014, Burakou’s apartment was searched, as was that of his parents. The journalist was charged with work without accreditation and fined €450. Burakou’s appeal to the country’s Supreme Court was rejected in May 2015.

The Belarusian Association of Journalists (BAJ) strongly condemns the continued prosecution of freelancers. It called the prosecutions a gross violation of the standards of freedom of expression.

In December 2014, OSCE Representative on Freedom of the Media Dunja Mijatović wrote in a letter to the Minister of Foreign Affairs of Belarus, Vladimir Makei, stating: “These undue restrictions stifle free expression and free media. Mandatory accreditation requirements for journalists should be reformed as they hinder journalists from doing their job.” She reiterated her call on to stop imposing restrictive measures on freelance journalists in April 2015.

The European Federation of Journalists (EFJ) issued a statement on the situation at its June 2015 annual meeting. It called on the Belarusian authorities to drop the practice of holding freelancers accountable for work without the accreditation. The union also called on the OSCE and the Council of Europe to pay more attention to violations of freelancers’ rights in Belarus.

Dzianisau, the freelance cameraman penalised for making video reports in Hrodna, said: “The most complicated thing for me in this situation is that the authorities shut off the air. At present, I cannot report in the history museum or the museum of religions. I cannot report in the puppet theater, and now in the exhibition hall on Azheshka Street.”

Some freelancers have been brought to trial several times during this period. Kastus Zhukouski has been fined six times and Alina Litvinchuk four times. Some see the pressure on the media in Belarus as increasing due to the upcoming presidential elections on 11 October 2015.

Not so long ago, President Alexander Lukashenko was asked what should be done about journalists receiving fines. In response, he acknowledged that the practice was improper and the matter should be investigated by his press service.

However, many Belarusian freelancers do not believe their situation will change soon. Larysa Shchyrakova, a freelance journalist from Gomel who has been penalised twice this year for co-operating with foreign media, said: “I do not believe there will be any liberalisation because it is contrary to the logic of the authorities. The system in Belarus is ineffective and the prosecution of journalists will always be a priority for the government.”