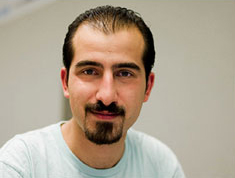 Syria’s authorities should immediately reveal the whereabouts of Bassel Khartabil, a software developer and defender of freedom of expression, 31 organizations said today. Syrian authorities transferred Khartabil, who has been detained since 2012, from Adra central prison to an undisclosed location on October 3, 2015.

Khartabil managed to inform his family on October 3 that security officers had ordered him to pack but did not reveal his destination. His family has not received any official information but believe based on unconfirmed information they received that he may have been transferred to the military-run field court inside the Military Police base in Qaboun.

“There are real fears that Khartabil has been transferred back to the torture-rife facilities run by Syria’s security forces,” a spokesperson for the groups said. “Khartabil should be on his way out of jail rather than being disappeared again.”

The organizations repeated their call for the immediate release of Khartabil who is facing field court proceedings for his peaceful activities in support of freedom of information.

International law defines a disappearance action by state authorities to deprive a person of their liberty and then refuse to provide information regarding the person’s fate or whereabouts.

Military Intelligence detained Khartabil on March 15, 2012 and he has remained in detention since. He was initially held incommunicado in the Military Intelligence Detention facility in Kafr Souseh for eight months and later in the military jail in Sednaya, where prison personnel tortured him for three weeks, he later told his family. Officials provided Khartabil’s family with no information about where or why he was in custody until December 24, 2012, when authorities moved him to Adra central prison, where Khartabil was eventually allowed visits from his family.

A Syrian of Palestinian parents, Khartabil is a 34-year old computer engineer who worked to build a career in software and web development. Before his arrest, he used his technical expertise to help advance freedom of speech and access to information via the Internet. Among other projects, he founded Creative Commons Syria, a nonprofit organization that enables people to share artistic and other work using free legal tools.

Khartabil has received a number of awards including the 2013 Index on Censorship Digital Freedom Award for using technology to promote an open and free Internet. Foreign Policy magazine named Khartabil one of its Top 100 Global Thinkers of 2012, “for insisting, against all odds, on a peaceful Syrian revolution.”

Military Field courts in Syria are exceptional courts that have secret closed-door proceedings and do not allow for the right to defense. According to accounts of released detainees who appeared before them, the proceedings of these courts were perfunctory, lasting minutes, and in absolute disregard of international standards of minimum fairness. During a field court proceeding on December 9, 2012, a military judge interrogated Khartabil, for a few minutes but he had heard nothing about his legal case since then.

“Bassel has always been a leading advocate for more transparency in Syria and the authorities should immediately reveal his whereabouts and reunite him with his family,” the spokesperson for the groups said.

One response to “Syria: Disclose whereabouts of detained freedom of expression advocate”