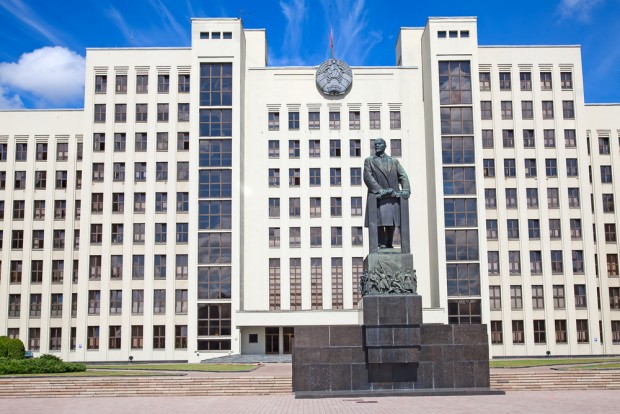 Miklos Haraszti, the UN Special Rapporteur on Human Rights in Belarus, has called for reforms to the country’s laws and practices that for two decades have stifled freedom of expression.

“Critical opinion and fact-finding are curtailed by the criminalisation of content that is deemed ‘harmful for the State’; by criminal defamation and insult laws that protect public officers and the president, in particular, from public scrutiny; and by ‘extremism’ laws that ban reporting on political or societal conflicts,” Haraszti said in a 6 November statement.

Belarus anti-extremism law came into force in 2007. According to Article 14 of the Law On Countering Extremism, it is prohibited to publish and or disseminate extremist materials, even through the media. Information products propagandising extremist activities can be seized by the decision of state security services, law enforcement agencies, prosecutor’s office or courts. If deemed extremist, the court can order the materials be destroyed.

The threat for free speech lies in the broad definitions of “extremist activities” and “extremist materials”. Under Belarusian law, extremist activities include “degrading of national honor and dignity”. Such provisions are contrary to international standards of freedom of expression.

“Unfortunately, this is one of the indicators of the current legislation of Belarus – the absolute vagueness of definitions and the absolute possibility of law enforcement to interpret them as they want,” Andrey Bastunets, chairperson of Belarusian Association of Journalists, said.

Critical materials regarded as extremist can end up banned. In 2011, the Ministry of Information issued a warning to Autoradio for broadcasting a message “containing calls for extremist activities”. The warning concerned a phrase by Andrei Sannikau, candidate for the presidency in 2010, that “the fate of the country is solved in the square, not in the kitchen”. The Supreme Economic Court and the National Commission on Broadcasting upheld the warning and the radio was stripped of its frequency.

The law has led to frequent seizures of imported printed material and videos by Belarusian customs offices. Usually, the seized materials are examined to determine if the items are extremist, but it is unclear how to properly get any property out of impound. Often the rightful owners are forced to repeatedly ask for the return of their material.

One of the most sensational cases related to “countering extremism” was the recognition of Belarus Press Photo 2011 album as extremist materials in 2013. The album contained images that won in 2011 the National Press Photo contest — an open annual contest of press photography. In November 2012, 41 copies of the album were seized for expert examination at the border with Lithuania border from three photojournalists, who were organisers of the contest.

Then the Belarusian KGB’s Hrodna regional department initiated proceedings to categorise the album as extremist material. Ashmiany District Court decided that the publication under consideration was extremist. The court’s decision was based on the KGB’s report that “the choice of the photos for the photo album in the aggregate reflects only negative sides of the life of the Belarusian people, together with the author’s own insinuations and conclusions, which, with the view of the socially accepted norms and morals, insults the national honor and dignity of citizens of the Republic of Belarus, diminishes the authority of the state power organs, undermines the trust of foreign states, foreign and international organisations to them.”

As a result, the seized copies of the album were ordered to be destroyed. Further, the court decision served as grounds to withdraw the license from Lohvinau, the publisher of the album. At least 17 anti-extremism motivated seizures of publications have been carried out by Belarusian customs officers since then.

On 10 November 2015, Oleksandr Doniy and four other Ukrainian TV journalists were interrogated and searched by Belarusian officers at the Ukraine-Belarus border while traveling by car to Vilnius, Lithuania. The journalists, who were working for the cultural programme Last Barricade, were held for five hours. A total of 22 items were seized, including five copies of a documentary about the Ukrainian Revolution (1917-1921) and 11 books, among them Confession From a Condemned Cell, Marshal Zhukov and Ukrainians During World War II. The Ukrainian journalists have been accused of importing “extremist literature and audio productions”.

On 19 November 2015, a number of human rights books were seized by customs officers from Aliaksandr Hanevich who was returning to Belarus from Lithuania. Those were De-facto Implementation of International Human Rights Standards: The Experience of Belarusian ILIA Program Alumni, Enlightened by Belarusianness by Ales Bialiatski, My Fight by Valery Hrytsuk, The Death Penalty in Belarus and Pervasive Violations of Labor Rights and Forced Labor in Belarus.

Besides the anti-extremism law, the grounds for stifling freedom of speech are contained in the Law On Mass Media. In the beginning of 2015, the new Article 51.1 was incorporated that set the procedure for restricting access to online information resources. It can be carried out extrajudicially by the decision of the ministry of information upon the request of any state body if the online resource disseminates information prohibited by law. The law also prohibits propaganda of extremist activities. Blocking websites can follow only one violation of the law, within three months since it occurred. This concerns access to both Belarusian and foreign websites viewed in Belarus.

In 2015, the ministry of information has restricted access to 40 websites, 11 of them have been blocked for disseminating extremist materials.