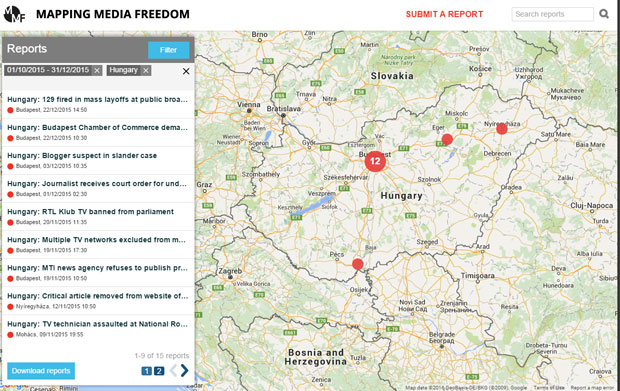 Hungary’s media outlets are coming under increasing pressure from lawsuits, restrictions on what they can publish and high fees for freedom of information requests, according to a survey of the 15 verified reports to Index on Censorship’s media monitoring project during the fourth quarter of 2015.

The Mapping Media Freedom project, which identifies threats, violations and limitations faced by members of the press throughout the European Union, candidate states and neighbouring countries, has recorded 129 verified incidents in Hungary since May 2014. In the fourth quarter of 2015 the country had the second-highest total of verified reports among EU member states and the sixth highest total among the 38 countries monitored by Mapping Media Freedom.

In 2015, Hungary was ranked #65 (partially free) on the World Press Freedom Index compiled by Reporters Without Borders. Only two EU member states, Greece and Bulgaria received a worse score.

In autumn 2015, the law governing freedom of information (FOI) was amended after a series of investigative reports uncovered wasteful government spending through FOI requests. Under the changes, the Hungarian government was granted sweeping new powers to withhold information and allowed the government and other public authorities to charge a fee for the “labour costs” associated with FOI queries. Critics warned that fees would prevent public interest journalism, and, in at least one case, it appears they were right.

In other cases, journalists have been sued for slander and issued court orders for undercover reporting on the refugee crisis.

Here are the 15 reports with links to more information.

Even the jobs of those who work for the government-friendly state broadcaster are far from being secure. On 22 December 2015, 129 employees were laid off by the umbrella company for public service broadcasters (MTVA) in pursuit of “operational rationalisation”.

Those fired included journalists, editors and foreign correspondents. According to the MTVA, the reason for the dismissal was the “better exploitation of synergies”, “increase of efficiency” and “cost reduction”.

András Jámbor, a blogger is suspect in a slander case because he refuted the claims of Máté Kocsis, the mayor of Józsefváros (8th district of Budapest). In August 2015, Mayor Kocsis published a Facebook post alleging that the refugees have been making fires, littering, going on rampage, stealing and stabbing people in parks.

In response, Jámbor wrote a post for Kettős Mérce blog, disproving the mayor’s claims. He added that “Máté Kocsis is guilty of instigation and scare-mongering”. The mayor denounced him for slander.

On 3 December 2015, Jámbor confirmed to police that he is the author of the blog post and sustains the affirmations he made. The police took fingerprints and mugshots of the journalist.

Gergely Nyilas, a journalist working for Hungarian online daily Index.hu, was summoned to court for his undercover report on refugee camp conditions published in August 2015.

The journalist reentered Hungary’s borders with a group of asylum seekers and, upon being detained, told the border guards that he was from Kyrgyzstan. Dressed in disguise, Nyilas reported on his treatment by border guards, the conditions at the Röszke camp, a bus ride and his experience at the police station in Győr. He eventually admitted he was Hungarian, at which point the police let him go, the Budapest Beacon reported.

Based on a police investigation, prosecutors first charged Nyilas with lying to law enforcement officials and forging official documents. The charges were then dropped but prosecutors still issued a legal reprimand against the journalist.

On 20 November 2015, László Kövér, the speaker of the parliament has banned RTL Klub television from entering the parliament building, saying that the crew broke parliament rules on press coverage. According to Kövér, the journalists were filming in a corridor, where filming was forbidden, and then refused to leave the premises after they were repeatedly asked to.

The day before, on 19 November, RTL Klub was not allowed to participate at a press conference held by Hungarian prime minister Viktor Orbán and NATO secretary general Jens Soltenberg in parliament.

RTL Klub, along with other Hungarian media outlets such as 444.hu or hvg.hu, were not invited to the press conference, but RTL Klub journalists still showed up. They attempted to enter the room with the camera rolling but were denied access. This incident reportedly led to the ban on their access.

RTL Klub journalists still attempted to attend by entering the room with a camera already rolling but were still barred from entering.

They were told that the meeting was “private”, and journalists were not allowed to ask questions. Bertalan Havasi, the press secretary for the Hungarian prime minister, told them that their pass was only for the plenary session and that they must leave. However, state media outlets like M1 were allowed live transmission of the press conference, and MTI, the Hungarian wire service also published a piece about the meeting.

The business interests of the son-in-law of Prime Minister Victor Orbán are widely discussed in the Hungarian media, especially because companies connected to Tiborcz are frequently winning public procurement tenders.

An article about a photo manipulation of Hungarian prime minister, Viktor Orbán was removed from the website of Szabolcs Online.

The article titled, A Mass of People Saluted Viktor Orbán at Nyíregyháza – Or Not?, had a photo showing that only two dozen people gathered around the Hungarian prime minister visiting the city of Nyíregyháza. Soon after the piece was published, it was removed from the szon.hu website. However, it was reportedly still available temporarily in Google cache.

The article was a reaction to a photo published by the state news agency, MTI, that was shot in such a way that it leaves the impression that there was a big crowd around the prime minister.

The mother of the aggressor, Jánosné Kis denied any wrongdoing, although her daughter actions were captured on film.

Hungarian media is demanding that the government repeal a plan that could force newspapers, television and radio stations as well as online publications to add agents from the constitution protection office (national intelligence and counterintelligence) to their staff, the Associated Press reported.

The Hungarian publishers’ association claimed that if the draft proposal by the interior ministry is passed by parliament, it could “harshly interfere with and damage” media freedom, and would facilitate censorship. The association represents over 40 of Hungary’s largest media companies.

Geza Szocs, the cultural commissioner in the Hungarian Prime Ministry, has asked for a modification of Hungary’s media law that would criminalise defamation, in an article for mandiner.hu. Szocs has also asked for a stricter regulation of damages caused by defamatory articles.

The commissioner wrote the piece in response to a series of articles published by index.hu, which criticised the Hungary’s presence at the 2015 Milan World Fair, a project that Szocs was managing.

A journalist working on a profile of András Tállai, Hungarian secretary of state for municipalities, was asked to delete pictures he had taken of the politician eating scones.

“Don’t take pictures of the state secretary while he is eating,” a staff member told the journalist, who works for vs.hu.

The journalist briefly interviewed Tállai, who is also head of the Hungarian Tax Authority, in the township of Mezőkövesd, where the politician started the conversation by asking, “Why do you want to write a negative article about me?”. Tállai then smiled and asked the journalist, “You are registered at the Tax Authority, right?”

Editors at MR I Kossuth Rádió, part of Hungarian public radio, did not broadcast an interview with János M. Rainer, one of the most acclaimed historians on the 1956 Hungarian revolution.

“We don’t need a Nagy Imre-Rainer narrative!” was the justification given by one of the editors to censor the content, the reporter who interviewed Rainer claimed.

In the press release, LMP criticised MTI by stating the Hungarian government is spending more money every year on the news agency, yet MTI fails to meet the standards of impartiality and is being transformed into a government propaganda machine.

Hungarian journalists were not allowed to ask questions at a press conference held after a meeting between the Hungarian president János Áder and the PM of Croatia, Kolinda Grabar-Kitarovic.

Only international journalists from Reuters and the Croatian state television were allowed to ask the politicians questions.