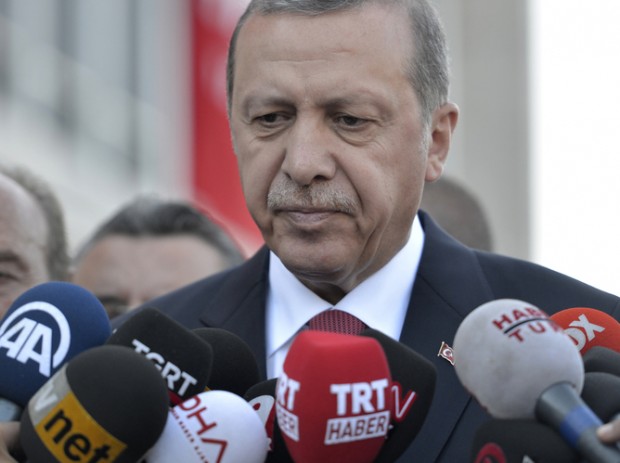 The increasingly autocratic government of Recep Tayyip Erdogan, president of Turkey, has clamped down on press freedom and opposing political viewpoints. Index on Censorship has condemned the ongoing attack on freedom of expression and, through its project Mapping Media Freedom, monitored the growing threats to the media. Below is a roundup of our recent reporting on media violations in Turkey.

Below is a roundup of our recent reporting on the ongoing media freedom crisis in Turkey.

Writers and artists condemn seizure of Zaman news group
Index joined with writers, journalists and artists around the world to condemn the seizure of Turkish independent media group, Zaman. Read the full letter

Petition: End Turkey’s crackdown on press freedom
Join Index on Censorship, writers, journalists and artists from around the world to condemn the shocking seizure of Turkish independent media group, Zaman. Sign the petition

Turkish court orders seizure of Zaman news group
The seizure of Turkey’s biggest opposition newspaper is the latest move against press freedom in the country. Since the election of Turkey’s president Recep Tayyip Erdoğan in 2014, the increasingly autocratic politician has waged an ongoing war with voices critical of his government. Read the full article

Kaya Genç: On “coup plots”, journalism trials and Turkey’s need for a proper dissensus
The modern crisis in Turkey’s journalistic freedoms began in 2008. Index on Censorship magazine’s Kaya Genc revisits the “coup cases” that ended up turning Turkish journalism into a field of feuds and hostilities. Read the full article

Zaman: The murder of a newspaper
On Friday night, security forces stormed Zaman, the widest-circulating Turkish newspaper. Though many Turkish news outlets studiously avoided covering the raids, the screens of international news channels were full of images of Turkish police using tear gas and water cannon against protestors trying to protect their paper. Particularly striking were the injuries to young women wearing Islamic headgear, the very segment of the community, which the ruling Justice and Development Party (AKP) once vowed to defend. Read the full article

Turkey: A long line of press freedom violations
Turkey’s government and courts have demonstrated their unwillingness to adhere to basic values on press freedom and media pluralism. From judicial harassment and seizing media companies to silencing Kurdish and critical media, Turkey’s government has been used by President Recep Tayyip Erdogan to silence critical voices in the country. Read the full article

Turkey: War on journalists rages on
The ongoing deterioration in Turkey’s press freedom has been well documented by Index on Censorship’s Mapping Media Freedom project since its launch in 2014. Read the full article

Zaman’s censored writers
The following columns were submitted to and rejected by the new management of the seized Zaman and Today’s Zaman.

Yavuz Baydar: Bid farewell to journalism, and lose Turkey
Following the presidential attacks on Turkey’s top judicial body, the Constitutional Court, stemming from its pro-freedom ruling over the case of Can Dündar and Erdem Gül of Cumhuriyet, and the unplugging two opposition channels from Türksat satellite, the dramatic seizure of Zaman and this newspaper, Today’s Zaman, both highly influential in their own ways, is one of the final nails in the coffin of journalism in Turkey. Read the full column

Nicole Pope: A lack of free media allows Turkish authorities to control the narrative
How do you write a column for a newspaper that still exists nominally but has been taken over by trustees appointed by an “independent” court? Such are the dilemmas in a country where democratic standards are slipping rapidly. No journalism school or manual of ethical journalism prepares one for such a situation. Read the full column

İhsan Yılmaz: No more genuine elections in Turkey
Just before I wrote my last piece for Today’s Zaman, there were rumors that the Zaman daily, written in Turkish, and Today’s Zaman, would be seized by the government. Read the full column

Suat Kınıklıoğlu: Europa Europa
Turks who are putting up a brave fight confronting the authoritarianism in this country every day are simply aghast at the show put on in Brussels. Turkey’s democrats have been thoroughly exposed to the crude pragmatism of the EU. Read the full column

Yaşar Yakış: Turkey’s bargain with the EU
An important step has been taken in Turkey’s painful negotiations with the EU. Turkey submitted to the Turkey-EU summit, held in Brussels on 7 March, several proposals. Read the full column

Doğu Ergil: Turkey, the humanitarian crisis and erratic responses
The numerical figures of the reality of Syrian refugees in Turkey are as follows: 2.2 million of the 4.3 million displaced Syrians who have been registered as persons of concern by the Office of the United Nations High Commissioner for Refugees (UNHCR) currently reside in Turkey. There is an estimated 400,000 who have settled in various parts of Turkey relying on their own financial resources. The total number of Syrian refugees in Turkey is higher than the entire population of six of the EU’s 28 member states. Read the full column