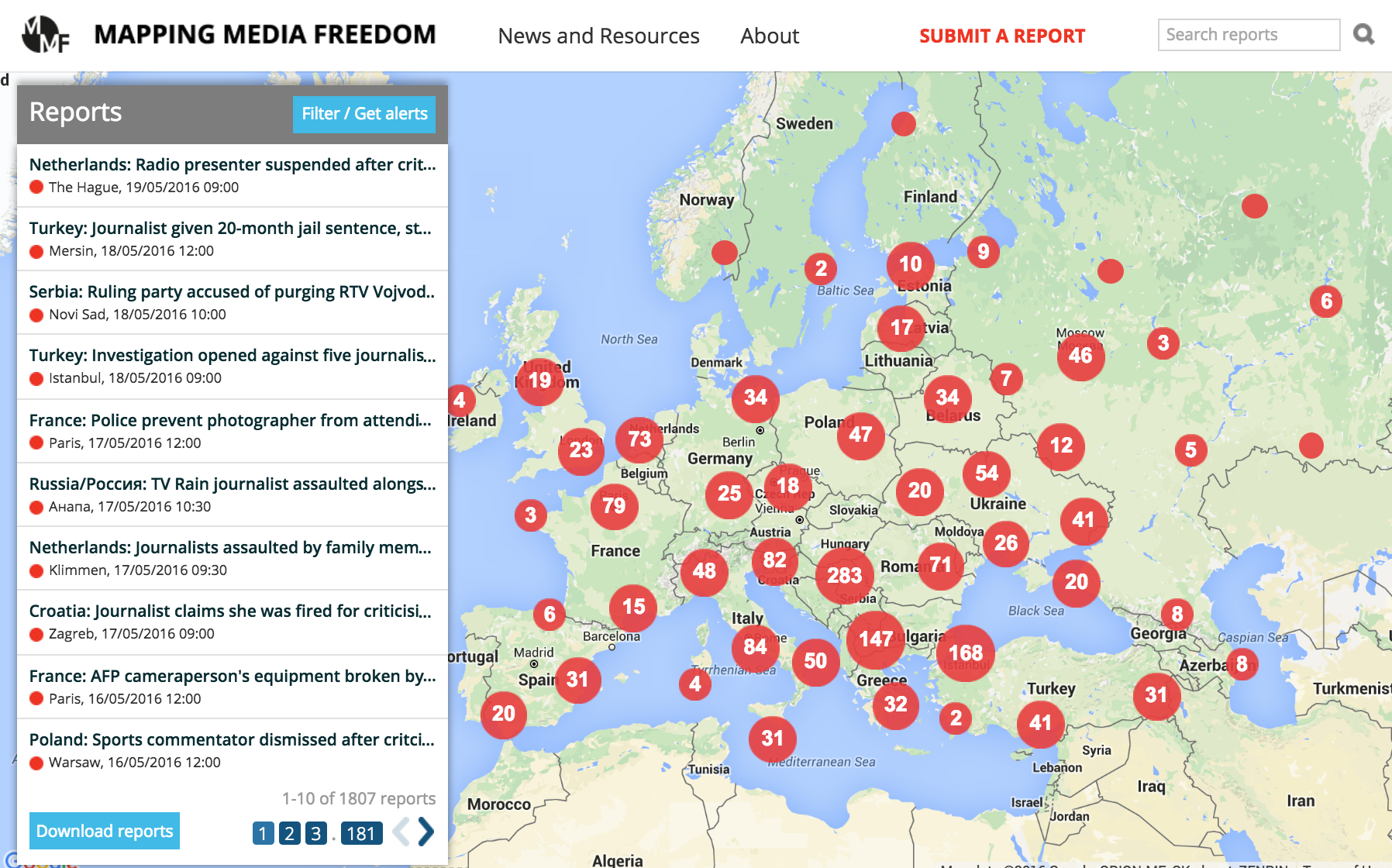 Mapping Media Freedom launched to the public on 24 May 2014 to monitor media censorship and press freedom violations throughout Europe. Two years on, the platform has verified over 1,800 media violations.

“The data the platform has collected over the last two years confirms that the state of press freedom across Europe is deplorable,” said Hannah Machlin, project officer for Mapping Media Freedom. “Media violations are occurring regularly in countries with strong democratic institutions and protective laws for journalists. Legislation limiting the press, violence across the continent and authoritarian governments are also fuelling this rapid and worrying decline. We hope that institutions and leaders take note of this information and take action swiftly.”

To mark the anniversary, we asked our correspondents to pick a key violation that stood out to them as an example of the wider picture in their region.

“The brutal attack on a minibus carrying six journalists and several human rights activists near the border between Ingushetia and Chechnya on the 9 March 2016 demonstrates the dangers faced by media professionals working in Russia’s North Caucasus. No suspects have been established so far. This case stands out due to its extreme violence but also supports a common trend: the reluctance of the local authorities to ensure that the journalists’ rights are respected.” – Ekaterina Buchneva

“This was a very relevant investigation, with no precedent, that took place in October, a few weeks away from the start of the trial known as Mafia Capitale, which concerns the scandal that involved the government of the city of Rome. It is a collective intimidation because it involved 97 journalists, who were denounced for violating the secret on the ongoing investigations. It is a really serious form of intimidation because it was activated within the field of law and thus is not punishable.” – Rossella Ricchiuti

“These attacks and actions taken by the government against independent media in Turkey attest to the shrinking space of independent media overall. In addition, it illustrates the shifting power dynamic within the ruling government in Turkey where once upon a time friends, are turned into enemies by the regime. As the paper wrote itself, Turkey is headed through its ‘darkest and gloomiest days in terms of freedom of the press.'” – MMF’s Turkey correspondent

“Aylisl’s 12-hour interrogation at the airport and later charges of hooliganism were just as absurd as the claim that a 79-year-old man, suffering from a heart condition and other health issues would attack an airport employee to such an extent that it would cause hemorrhage. I chose this example to illustrate the absurdity of charges brought against individuals in Azerbaijan but also the extent to which the regime is ready to go in order to muzzle those voices who different.” – MMF’s Azerbaijan correspondent

“This incident best demonstrates the division in society as a whole and among journalists as a professional guild. This is a clear example of how politicians and elites look upon and treat the journalist that are critical towards their policies and question their authority.” – Ilcho Cvetanoski

“This was the most serious incident over the last two years in Bosnia regarding the state’s misuse of institutions to gag free media and suppress investigative journalism. In this specific incident, the state used its mechanisms to breach media freedoms and send a chilling message to all other media.” – Ilcho Cvetanoski

“After the centre-right government in Croatia came to power in late 2015, media freedom in the country rapidly deteriorated. Since then around 70 media workers in the public broadcaster were replaced or removed from their posts. This particular case of the prominent editor-in-chief of the weekly newspaper Novosti receiving a threatening letter from anonymous disbanded military organisation demonstrates the polarisation in the society and its affect on media freedom.” – Ilcho Cvetanoski

“This was the second attack against journalists by Golden Dawn members within one month. With more than 50,000 asylum seekers and migrants trapped in Greece, the tension between members of the far-right group and anti-fascist organisations is rising.” – Christina Vasilaki

“This report highlights the extent of the ongoing political cleansing of the public media since the new media law was passed in early January.” – Martha Otwinowski

“The MMF platform lists numerous incidents where German journalists have been threatened or physically assaulted by right-wing extremists over the last two years. This incident stands out as a case of severe intimidation that resulted in silencing the journalist altogether.” – Martha Otwinowski

“On 22 November 2015, the Belgian authorities asked the press to refrain from reporting while a big anti-terrorist raid was taking place in Brussels. While understandable, this media lock-down raised questions for press freedom and underlined the difficulties of reporting on terror attacks and anti-terror operations.” – Valeria Costa-Kostritsky

“This Luxleaks-related case is the only violation we have become aware in Luxembourg over the period (which is not to say that no other cases occurred). Along with two whistleblowers, a journalist was prosecuted by PricewaterhouseCoopers and accused of manipulating a whistleblower into leaking documents. This is a good example of the threat the notion of trade secrets can represent to journalism.” – Valeria Costa-Kostritsky

“This incident shows how fragile the media freedom and personal data of journalists are in armed conflict. Even after a great international scandal, the site continues to break the legislation and publishes new lists. It has been operating for two years already and those involved in its activities go unpunished. It seems that the post-Maidan Ukraine has simply ‘no political will’ for this.” – Tetiana Pechonchyk

“The latest issue for the Spanish media is the Public Security Law, introduced in June 2015, which among other things limits space for reporters. The law prohibits the publication of photo and video material where police officers may be identified, unless official state permission is obtained. This was the first case of a journalist being fined by the new law.” – Miho Dobrasin

“The story has ended in impunity: a criminal case was not even filed against the police officers who had beaten the journalist.” – Volha Siakhovich

“This was the beginning of a disturbing tendency to react with rather futile gestures against Russian television channels. The bans are not so much against the media, as telling the audience that the authorities, not the public, will decide what Latvian viewers may or may not see or hear.” – Juris Kaža

“You have to be very brave to launch a new investigative journalism portal in Serbia and expose corruption and organised crime involving government officials. That is why the launch of KRIK in early 2015 has been so important for media freedom, but at the same time so dangerous for its journalists. Smear campaigns like this by pro-government tabloid Informer are a relatively new but common method in the Balkans to scare journalists off.” – Mitra Nazar