Anti-censorship group GreatFire has today launched a new service that will help internet users inside China live test how well different virtual private networks are working in the country.

VPNs, which create direct links between computers and offer a way in which to gain unrestricted access to the internet, are vital for business in China as well as for accessing information. The country actively censors the internet, with users having to use circumvention tools in order to access over 18,000 websites including Google, Facebook, the BBC and the New York Times.

“There is a commonly held belief in China that if you have a VPN that works then you should keep quiet about it,” said GreatFire co-founder Charlie Smith. “In terms of freedom of access to information, the problem with this approach is that it keeps useful knowledge secret. We hope this project will destroy that model and give people accurate information so they can make informed choices. The public need to be able to get online quickly, reliably and free from state censorship.”

Chinese authorities have stepped up their attacks on circumvention tools over the past 18 months and GreatFire’s new testing site is part of the group’s attempt to fight back. The site – Circumvention Central (CC) – provides real-time information and direct access to both free and paid-for censorship-evasion tools that are working in China. 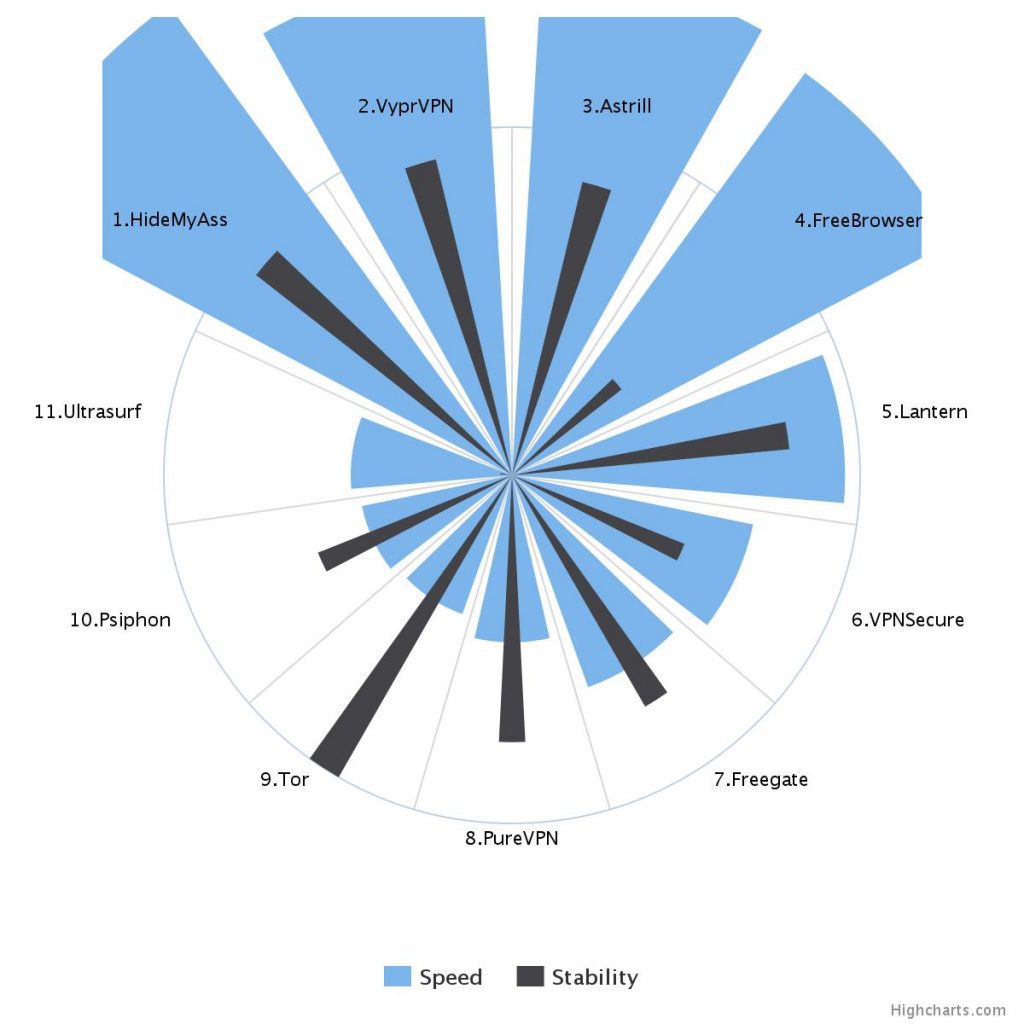 Constantly updated using information from within China, all VPNs (including GreatFire’s own circumvention tool FreeBrowser) are measured on both speed (how quickly popular websites are loaded) and stability (the extent to which popular websites load successfully).

Speed tests typically measure download and upload speed by sending a few requests to a speed test server. That means reported speeds do not reflect user experience because normal browsing involves frequently sending lots of requests to many different servers.

In contrast, GreatFire’s speed test aims to reflect real user experience by downloading resources from the ten most popular websites in the world, including Google, Facebook, YouTube, Baidu, Amazon and Yahoo. If the contents returned are incorrect or if the download fails to complete within 40 seconds, the test is marked as failed.

Besides speed, stability is also tracked. Typically not taken into account by other services, the stability test reflects the likelihood of a connection failing. Although any connection anywhere should deliver 100% stability unless unplugged, VPNs on the ground in China fail regularly. Testing happens in real-time, which is essential to an environment where VPNs get blocked and unblocked continuously.

Visitors to the CC site can purchase any paid-for tool currently tested. GreatFire will act as a reseller of these tools in China and as such be given a portion of each sale by the VPN providers themselves. Users need not be based in China to purchase a circumvention service.

Any revenue generated through the site will be used to support the ongoing digital activism of GreatFire, which earlier this year won an Index on Censorship Freedom of Expression Award for its work fighting online censorship in China.

“At the moment, GreatFire relies on the kindness of individuals who send us donations and a limited number of grant-making organizations around the world,” said Smith. “We want to reduce our reliance on these organizations and raise enough funds to properly end internet censorship in China as soon as is humanly possible”.

Smith hopes the new site will revolutionise VPN use in China. “Until CC, nobody has provided public information about the effectiveness of circumvention tools in China. Many have provided misinformation,” he said. “Some VPN providers have also famously encouraged their customers to “keep quiet” about the effectiveness of their solutions. On the contrary, we encourage everyone who hears about this project to share this information with those who they think could benefit.”

See below for image, copyright free.

Index on Censorship is an international organisation that defends people’s freedom to express themselves without fear of harm or persecution. Our Freedom of Expression Awards celebrate some of the world’s most creative and courageous artists, campaigners, journalists and digital activists. As winners of the 2016 award for Digital Activism, GreatFire are current Fellows, supported to magnify their impact and further the fight against censorship worldwide.