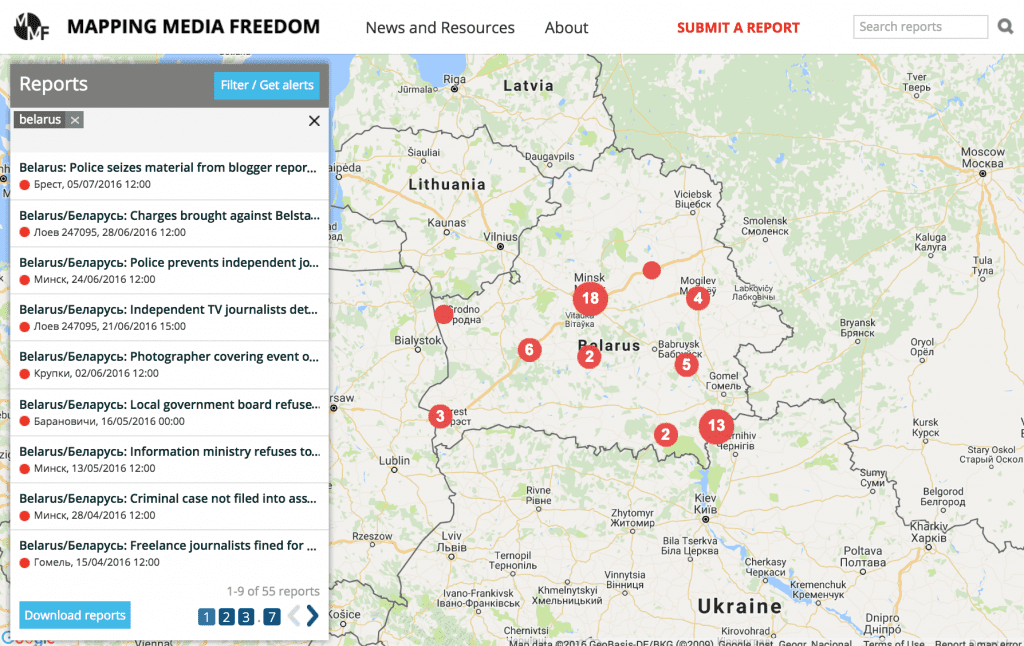 Despite repeated calls by international organisations for reform, Belarus’ regime for press accreditation continues to help the government maintain its monopoly on information in one of the world’s most restrictive environments for media freedom.

The government of president Aleksandr Lukashenko uses the Law on Mass Media to control who reports and on what in an arbitrary procedure that is open to manipulation. While Article 35 sets out journalists’ rights to accreditation, Article 1 of the law defines the process as: “The confirmation of the right of a mass medium’s journalists to cover events organised by state bodies, political parties, other public associations, other legal persons as well as other events taking place in the territory of the Republic of Belarus and outside it.”

By outlining credentialing as a system providing privileges for journalists, Belarus’ accreditation structure is contrary to international standards. The law allows public authorities to choose who covers them by approving or refusing accreditation. It also denies accreditation to journalists who do not work for recognised media outlets. Even journalists who report for foreign outlets must be full-time employees to be able to be accredited by the Belarusian Ministry of Foreign Affairs.

In practice, the law blocks freelance journalists or independent media outlets from covering the activities of the government and makes accreditation a requisite for a career in journalism. Only journalists who work for state-run outlets are accredited to report on state ministries, parliament or local governments.

Though refusing accreditation does not mean a total ban on a journalist’s professional activities, it creates obstacles to access to information. This discriminatory structure is especially acute for freelance journalists and those who work for independent media outlets.

In May 2016, the local government of Baranavichy district, in the Brest region, refused to accredit Julia Ivashka, a reporter for independent newspaper Intex-press. An official letter said the local government does not intend to expand the list of media outlets which are permitted to cover its sessions. The three currently accredited are state-run.

Under the mass media law, freelance journalists who do not have a contract with an outlet have no legal right to ask for accreditation. At the same time these independent reporters do not enjoy the same rights as journalists who work for accredited media outlets, they can also be targeted by the police, who use the lack of accreditation as a pretext to block freelancers from exercising their professional duties.

On 24 June 2016, police officers prevented independent journalists Yuliya Labanava and Ales Lyubyanchuk from filming a public discussion on the planned construction of a new Minsk shopping mall. Police officers then threatened to remove them from the room altogether if they asked any questions.

On 13 May 2016, the ministry of information refused to accredit а correspondent and cameraperson working for BelaPAN – the main independent news agency in the country – at the XI Belarusian International Media Forum in Minsk. This decision prevented BelaPAN from covering the event. The Ministry of Information did not comment on the reasons for the rejection.

Since April 2015, when Index on Censorship’s Mapping Media Freedom project began monitoring threats to media freedom in the country, there have been 28 verified incidents involving blocked access that took place in Belarus. Most of these reports involved freelance or full-time journalists working for independent news outlets, who lack accreditation.

“Belarus’ strictly controlled media environment is part of the government’s overall control of the press and information. The number of reported incidents seems low until you consider that Belarus is one of the most restricted countries in Europe, as it’s considered the continent’s ‘last dictatorship’. This arbitrary and capricious accreditation system must be reformed,” Hannah Machlin, Mapping Media Freedom project officer at Index, said.

In 2014 OSCE representative on Freedom of the Media Dunja Mijatović called on Belarusian authorities to repeal accreditation requirements for foreign and national journalists. “Accreditation should not be a license to work and the lack of it should not restrict journalists in their ability to work and express themselves freely,” Mijatović said.

In the same year the UN Human Rights Committee considered the case of Maryna Koktysh, a journalist working for the independent newspaper Narodnaya Volya. Koktysh was denied accreditation to the House of Representatives of the National Assembly, the lower chamber of the Belarusian parliament. The UN concluded that by creating obstacles to obtaining information, the government violated Koktysh’s right to free expression and recommended a review of Belarusian legislation to prevent similar violations in the future.