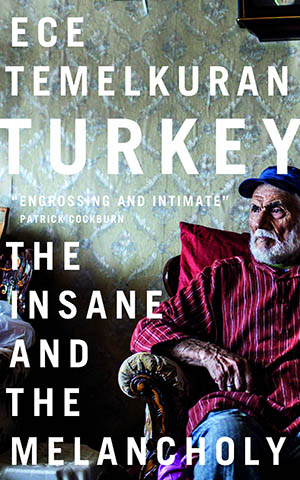 In an extract from her new book, Turkey: the Insane and the Melancholy, journalist and author Ece Temelkuran discusses the role of the Turkish ministry of culture in censoring theatre productions. Temelkuran will be speaking at Waterstones Trafalgar Square on 20 Sept.

In 2013, the Ministry of Culture began to evaluate its subsidies to private theatres under the criterion of being “suitable with regard to public decency”. This enforcement arose as part of the Turkey Art Association (TÜSAK), which was put forward in a bill advocating the audition and support of art associations affiliated with the state. In this way, the legal foundation for state-imposed censorship was laid.

For the evaluation of private theatre companies’ grant requests to the Ministry of Culture, submission of the play’s script was made obligatory. Shakespeare’s Macbeth was removed from the State Theatre repertoire in 2014.

In December 2014, Sevket Demirkaya, who had previously held positions such as wrestling referee and municipal police chief, was appointed Director of the Istanbul Metropolitan Municipality Theatre Company. In 2013, the Ministry of Culture cut off its funding to the company of Genco Erkal, one of the most acclaimed stage personalities in Turkey, for supporting the Gezi protests. The Directorate General of State Opera and Ballet prohibited the wearing of certain garments, including leggings, in October 2014.

Theatre wasn’t the only thing Erdogan had a beef with, naturally. He was also passionate about sculpture. On 8 January 2011, during election preparations in Kars – a place the whole world is familiar with thanks to Orhan Pamuk’s novel Snow – he was once again yelling, “Freak show!”

The freak show in question was an enormous statue. The mayor, a member of his own party, was having a peace statue built in the city bordering Armenia, a statue that could be seen from Erivan. The work, by one of Turkey’s most renowned sculptors, Mehmet Aksoy, had just been completed when it turned out that it didn’t suit Erdogan’s tastes. A few months after Erdogan appraised the sculpture as a “freak show”, it was demolished in spite of every court ruling, and at quite a high cost. The worst part about it all was the cry of “the people” as they set about its destruction:

I suppose that the intellectuals who were irked when I suggested that sometimes Turkey was like Afghanistan with a nicer shop window, who thought it “elitist and Jacobin”, probably shared my apprehensions on the day they witnessed that savage and wanton destruction.

Erdogan was also interested in music. That was why the work of Fazıl Say, a world-renowned composer and pianist who was critical of the AKP administration, was immediately removed from the repertoire of the Presidential Symphony Orchestra.

Perhaps the eeriest of these persecutions over the years came in December 2011, from the Minister of Internal Affairs. The Minister said: “The backyard of terrorism, walking around the back, and by backyard this could be Istanbul, could be Izmir, Bursa, Vienna, Germany, London, wherever – it could be a podium at the university, an association, a non-governmental organisation … They look like they’re just singing but they say something to the audience in between three songs, squeeze in a few lovely words. Whatever you take from it, however you understand it. They’re making art on that stage. What can you do? We are not against art, but we have to weed these out with the meticulousness of a surgeon.”

I wish the best of luck to the translator who has to translate these words. I hope readers, too, will manage to keep their wits intact after so much of the government’s poor self-expression.

In the wake of these declarations that signalled a new onslaught of custody and persecution, artists came up with a parody petition:

“Ban art! Put art within the scope of terrorist activity!”

This is an extract from Turkey: the Insane and the Melancholy (Zed Books, 2016) by Ece Temelkuran, which is available now.

Ece Temelkuran will be participating in two upcoming events:

15 Sep: The State of Turkey with Kaya Genç, Ece Temelkuran and Daniel Trilling

Join Index on Censorship magazine’s contributing editor Kaya Genç and fellow Turkish writer Ece Temelkuran for a discussion about the state of Turkey in the aftermath of the failed military coup.

20 Sep: Author Ece Temelkuran on the struggles that have shaped Turkey

Join Index on Censorship’s CEO Jodie Ginsberg as she presents an evening with award-winning journalist and novelist Ece Temelkuran to discuss her latest book Turkey: The Insane and the Melancholy.