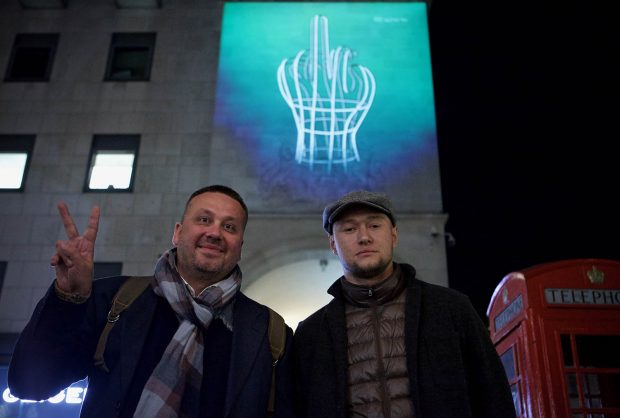 Ukrainian rock musician and activist Andriy Klyvynyuk spoke to Index on Censorship about his support for popular film director and pro-Ukrainian activist Oleg Sentsov and the other Ukrainian political prisoners held by Russia.

Klyvynyuk, the frontman of the pop group Boombox, was a speaker at Belarus Free Theatre’s Freedom of Expression in Ukraine event at the House of Commons in London, where he called on the British government to demand Sentsov’s release. Sentsov is serving a 20-year prison sentence on charges of being part of a terrorist conspiracy. He has stated that he was tortured by investigators and that a key witness recanted in the courtroom on the grounds that evidence had been extorted under torture. His lawyers describe the case against him as “absurd and fictitious”.

Sentsov faces another 18 years in jail but Klyvynyuk, who drove an ambulance during the pro-EU Euromaidan protests in 2014, is determined that Ukraine will continue to work towards a future free of Russian interference.

“We used to cry but now we are laughing because we are not afraid,” he told Index. “We are only 25 years old as a country, and we are at the very beginning of a road. We want to be open and don’t want to see a great wall. I don’t want to be a big star somewhere, having everything but not being able to travel, speak with you, and that was the point of Euromaidan. We are not for the money, the wealth, houses and cars – it’s not what we want, it’s not the point of life at all.”

According to Klyvynyuk, it is Russia that is afraid. “They are very frightened to lose their dominance, to lose their money, to lose their superpower, in such a way as our mafia lost their power,” he said. “The officials are so much afraid that they invaded an independent state.”

Other speakers at the House of Commons event included journalist and author Peter Pomerantsev, and film and theatre director turned soldier Eugene Stepanenko. A video was shown including messages of solidarity from artists including fashion designer Vivienne Westwood and actor Will Attenborough.

Klyvynyuk welcomed these contributions. Although he does not mix his art with his activism, he feels strongly that those with a public position have a responsibility to speak out on human rights abuses. Those who shut their eyes to it, he says, are “clowns dancing on the tables of dictators”.

“I’m a patriot of course but I don’t think Ukraine is bigger or better than any other country in the world,” he said, calling on the world’s media to refocus on Russia’s behaviour towards its neighbour. “This is why we talk about political prisoners all over the world and wars all over the world. But to forget about situations like that, then everybody says ‘Oh, how are you? Are you okay?’ three years later. I say ‘Hey, stop, you know nothing’, and if you are a media person, if you’ve got followers on your social media, if thousands of people are waiting to hear from you, you should find some time to tell these important things.”

As for Oleg Sentsov, Klyvynyuk’s message was one of hope. “I hope that he won’t be broken inside, I hope that he, all of them, will find strength to live through, and then after we win, go out and not just sit and do nothing but continue their work, what they are here for.”