After 29 years of circulation, Himal Southasian, which claims to be the only analytical and regional news magazine for South Asia, will cease to publish as of November 2016 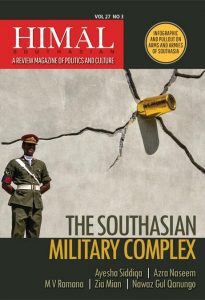 One of South Asia’s most influential news magazines, Himal Southasian, is to close next month after 29 years of publishing as part of a clampdown on freedom of expression across the region. The magazine has a specific goal: to unify the divided countries in South Asia by informing and educating readers on issues that stretch throughout the region, not just one community.

Index got a chance to speak with Himal Southasian’s editor, Aunohita Mojumdar, on the vital role of independent media in South Asia, the Nepali government’s complicated way of silencing activists and what the future holds for journalism in the region.

“The means used to silence us are not straightforward but nor are they unique,” Mojumdar said. “Throughout the region one sees increasing use of regulatory means to clamp down on freedom of expression, whether it relates to civil society activists, media houses, journalists or human rights campaigners.”

Himal Southasian, which claims to be the only analytical and regional news magazine for South Asia, faced months of bureaucratic roadblocks before the funding for the magazine’s publisher, the Southasia Trust, was cut off due to non-cooperation by regulatory state agencies in Nepal, said the editor. This is a common tactic among the neighbouring countries as governments are wary of using “direct attacks or outright censorship” for fear of public backlash.

But for Nepal it wasn’t always this way. “Nepal earlier stood as the country where independent media and civil society not accepted by their own countries could function fearlessly,” Mojumdar said.

In a statement announcing its suspension of publication as of November 2016, Himal Southasian explained that without warning, grants were cut off, work permits for editorial staff became difficult to obtain and it started to experience “unreasonable delays” when processing payments for international contributors. “We persevered through the repercussions of the political attack on Himal in Parliament in April 2014, as well as the escalating targeting of Kanak Mani Dixit, Himal’s founding editor and Trust chairman over the past year,” it added.

Index on Censorship: Why is an independent media outlet like Himal Southasian essential in South Asia?

Aunohita Mojumdar: While the region has robust media, much of it is confined in its coverage to the boundaries of the nation-states or takes a nationalistic approach while reporting on cross-border issues. Himal’s coverage is based on the understanding that the enmeshed lives of almost a quarter of the world’s population makes it imperative to deal with both challenges and opportunities in a collaborative manner.

The drum-beating jingoism currently on exhibit in the mainstream media of India and Pakistan underline how urgent it is for a different form of journalism that is fact-based and underpinned by rigorous research. Himal’s reportage and analysis generate awareness about issues and areas that are underreported. It’s long-form narrative journalism also attempts to ensure that the power of good writing generates interest in these issues. Based on a recognition of the need for social justice for the people rather than temporary pyrrhic victories for the political leaderships, Himal Southasian brings journalism back to its creed of being a public service good.

Index: Did the arrest of Kanak Mani Dixit, the founding editor for Himal Southasian, contribute to the suspension of Himal Southasian or the treatment the magazine received from regulatory agencies?

Mojumdar: In the case of Himal or its publisher the non-profit Southasia Trust, neither entity is even under investigation. We can only surmise that the tenuous link is that the chairman of the trust, Kanak Mani Dixit, is under investigation since we have received no formal information. Informally we have indeed been told that there is political pressure related to the “investigation” which prevents the regulatory bodies from providing their approval.

The lengthy process of this denial – we had applied in January 2016 for the permission to use a secured grant and in December 2015 for the work permit, effectively diminished our ability to function as an organisation until the point of paralysis. While the case against Dixit is itself contentious and currently sub judice, Himal has not been intimated by any authority that it is under any kind of scrutiny. On the contrary, regulatory officials inform us informally that we have fulfilled every requirement of law and procedure, but cite political pressure for their inability to process our requests. Our finances are audited independently and the audit report, financial statements, bank statements and financial reporting are submitted to the Nepal government’s regulatory bodies as well as to the donors.

Index: Why is Nepal utilising bureaucracy to indirectly shut down independent media? Why are they choosing indirect methods rather than direct censorship?

Mojumdar: The means used to silence us are not straightforward but nor are they unique. Throughout the region one sees increasing use of regulatory means to clamp down on freedom of expression, whether it relates to civil society activists, media houses, journalists or human rights campaigners. Direct attacks or outright censorship are becoming rarer as governments have begun to fear the backlash of public protests.

Index: With the use of bureaucratic force to shut down civil society activists and media growing in Nepal, how does the future look for independent media in South Asia?

Mojumdar: This is actually a regional trend. However, while Nepal earlier stood as the country where independent media and civil society not accepted by their own countries could function fearlessly, the closing down of this space in Nepal is a great loss. As a journalist I myself was supported by the existence of the Himal Southasian platform. When the media of my home country, India, were not interested in publishing independent reporting from Afghanistan, Himal reached out to me and published my article for the eight years that I was based in Kabul as a freelancer. We are constantly approached by journalists wishing to write the articles that they cannot publish in their own national media.

The fact that regulatory means to silence media and civil society is meeting with such success here and that an independent platform is getting scarce support within Nepal’s civil society will also be a signal for others in power wishing to use the same means against voices of dissent.

It is a struggle for the media to be independent and survive. In an era where corporate interests increasingly drive the media’s agenda, it is important for all of us to reflect on what we can all do to ensure the survival of small independent organisations, many of which, like us, face severe challenges.