When cartoonists are being arrested, and novelists told their plots must only support the government line, you know your nation is in deep trouble, argues Rachael Jolley 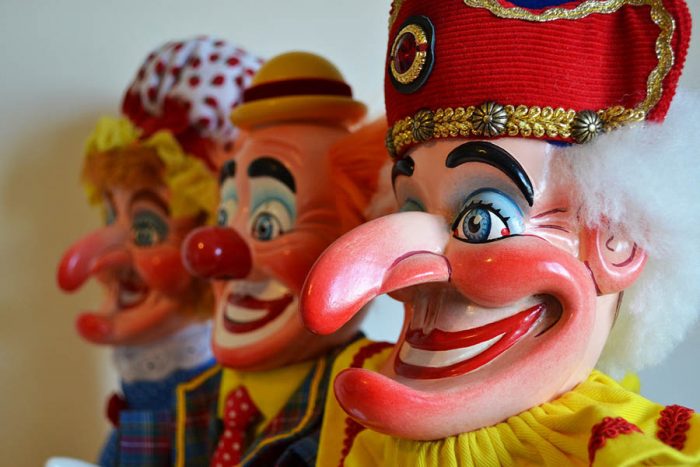 A COUNTRY’S SENSE OF humour is a nebulous thing. But when it starts to disappear, something serious is afoot.

And so it is in Spain right now. Comedy, it turns out, is touching a nerve, as it often does, and rather surprisingly the lawyers are getting involved. Comedy is not only a threat, but under threat.

What’s bizarre is, this is Spain, a modern democracy, a solid, sensible country at the centre of Europe. Locking people up for making a joke, that’s something you might expect from an authoritarian and struggling state. But Spain?

Well, it turns out, this is Spain in the 21st century. The list of comedy offences is not short. Spanish comedian Dani Mateo was told to testify before a judge in May for telling a joke referring to a monument built by Franco’s regime as “shit”. He told the joke during a satirical show. Now it doesn’t sound like the best joke in the world, but hell, we defend his right to tell it. And Mateo is not alone in the Spanish comic fraternity. There’s Facu Díaz, who was prosecuted last year for posting jokes on social media; Cassandra Vera, who was sentenced to a year in prison for making jokes about a former Spanish president; and three women who were accused of a religious hate crime for mocking a traditional Easter procession. Puppeteers whose Punch and Judy show included a sign for a made-up terrorist organisation carried by a witch spent a year fighting prosecution, unable to leave the country for weeks, receiving anonymous threats and having to report regularly to the police. On and on it goes, as Silvia Nortes reports for us on page 85.

So why does any of this matter? Well, jokes are a barometer of public mood, and as British comedian Andy Hamilton told this summer’s Hay Festival, you can even use them to test how much the public like or dislike a politician or public figure. He remembered making a joke about then Prime Minister Margaret Thatcher, and being told by one of her staunchest supporters to expect a wave of outrage. On checking, he found just three complaints, and that’s when, he said, he knew Thatcher was on the way out. Similarly, a recent joke about former UK Justice Secretary Michael Gove received a big fat zero moans in the BBC complaints box. Hamilton reckoned this was a sign of just how little the public cared about Gove.

So jokes do take the temperature of the nation, and one of many reasons politicians fear them is, as Mark Twain said, “Against the assault of laughter, nothing can stand.”

Politicians fear being made fun of, and fear that a satirical representation of themselves may take root in the electorate’s brain. They fear the public seeing their weaknesses. Some may remember that the classic satirical British TV puppet show Spitting Image reduced each member of the cabinet to a single ridiculous idea, a spitting former Home Secretary Roy Hattersley or a tiny David Steel tucked in the top pocket of David Owen (joint leaders of the SDP-Liberal alliance). Not good for their egos, not good for their future prospects. Steel said later that the sketch definitely affected his image.

That idea of groupthink, honed by the Soviet Union, satirised by George Orwell, continues to haunt writers in former communist countries today

Joke-telling is not the only ingredient in the comedy cupboard that upsets the powers that be. Historically, exaggerated portraits, as Edward Lucie-Smith writes in issue 197 of Index on Censorship, have long been used to diminish or enhance a public character. The most obvious creators of exaggerated portraits are newspaper cartoonists, who sometimes feel the long arm of the police on their shoulders as a result.

In our exclusive interview with legendary South African cartoonist Zapiro, he talks not only about the power of cartoonists, but the pressure on them not to offend or upset. In an interview with South African journalist Raymond Joseph, Zapiro said: “We provoke thought, even if that thought is pretty outrageous. Others can do it too. We just occupy a space where you can really push the boundaries.” Zapiro faced a six-year court battle with South Africa’s President Jacob Zuma over one of his cartoons. But Zapiro is just as feisty as ever, and reckons he is bolshier than the generations that have come after him.

Cracking down on comedy is just one way to command and control society. This issue’s special report examines others as we study the long shadows Russia’s 1917 revolution cast within and without its national borders.

From the beginning the early Soviets were not particularly fond of disagreement. Shortly after their rise to power, between October 1917 and June 1918, around 470 opposition publications were closed down. Lenin was clear how the nation should work. He believed that journalists, novelists and opinion formers were either with him, or against the state. If they were against the state, they shouldn’t be allowed to write or outline their views. “Down with non-partisan writers,” he argued. This is a view very much in favour with many other rulers today, including Angola’s President José Eduardo dos Santos, Chinese President Xi Jinping, and, recently, US President Donald Trump.

That idea of groupthink, honed by the Soviet Union, satirised by George Orwell, continues to haunt writers in former communist countries today. In Uzbekistan, as Hamid Ismailov outlines, the Soviet Union may have fallen, but the thinking remains the same. Writers with arguments that contradict President Shavkat Mirziyoyev are either neutralised by being employed by the state as advisers and consultants, or leave the country, or fail to be published.

In President Vladimir Putin’s Russia most of the media, apart from a few brave exceptions, fall into line with government positions. For instance, in February this year, according to the Index-led Mapping Media Freedom project, major Russian national television channels abruptly reduced the number of times they mentioned the US president. This followed a Kremlin order to cut back on “fawning coverage” of Trump.

In all the recent furore over “fake news”, prompted by almost incessant use of the term by Trump to undermine any reporting he didn’t like, it’s worth pointing out that tricks to get the public to believe something that is not true have been used throughout history. In fact, as Jemimah Steinfeld investigates (page 114), the Roman emperor Augustus was a master of manipulation well before PR handbooks were written.

And open the pages of a treasured book in our office and you’ll see an early version of photoshopping at work. Photographs featured in The Commissar Vanishes: The Falsification of Photographs and Art in Stalin’s Russia, show how people were “disappeared” from official Soviet portraits in the 1930s as they fell out of favour. Belarusians have been experiencing government attempts to get them to believe false stories for decades. In his report on page 52, Andrei Aliaksandrau unpicks the tricks used over the years and holds them up to the light.

And there’s some excellent thoughtful pieces in our fiction section too, with two new short stories written for this publication: one by Turkish writer Kaya Genç, and the other by British writer Jonathan Tel. The final slice is a new English translation of a much older story, by Russia’s “Comrade Count” Alexei Tolstoy.

To finish, a sad note. Our regular, and fantastic, Brazil correspondent Claire Rigby has died suddenly. Claire did amazing reporting for us, and we will miss her.

Rachael Jolley is the editor of Index on Censorship magazine. She recently won the editor of the year (special interest) at British Society of Magazine Editors’ 2016 awards

Oscar Collazos reports on the Colombian mourners after the assassination of comedian Jaime Garzon, who told insolent truths to the world.

You must be joking!

Israeli comedians who dare to make jokes around the Shoah run foul of their country’s ultimate taboo: this is no laughing matter.