Adam Rajab, the son of the prominent Bahraini human rights activist, says his father "is sacrificing himself to see a country which respects human rights" 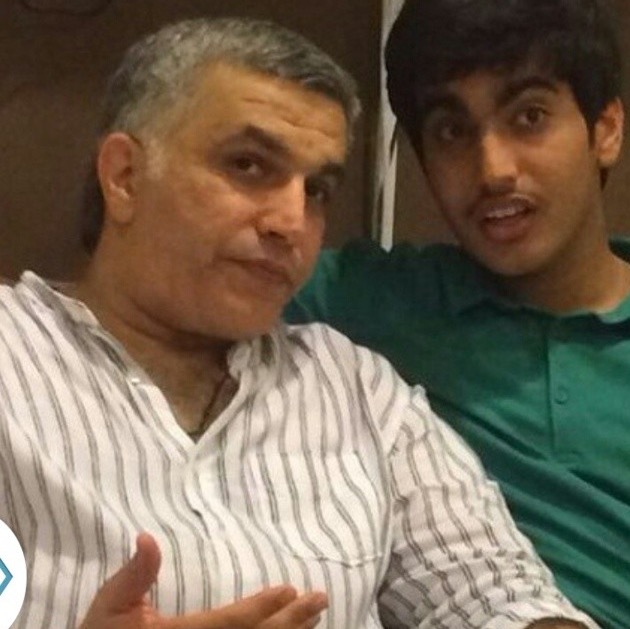 On Tuesday 30 May, one of two trials against the Bahraini human rights activist Nabeel Rajab, who has been imprisoned for almost a year, was postponed for the eighth time. The case against him for “spreading false news” is now due to be heard on 12 June.

The other trial against him, which has been postponed 13 times, is related to his anti-war messages and for exposing torture in Bahraini prisons. This case is due to be heard on 14 June.

Rajab’s son, Adam Rajab, told Index on Censorship: “My father is sacrificing himself to see a country which respects human rights, and he is happy to do that. I’m not exaggerating when I say he is unbreakable.”

During his time in prison, Nabeel Rajab has undergone two operations, suffered two bouts of heart palpitations that required emergency medical care and has developed a range of other medical conditions, including low white blood cell count.

On 8 April, the activist’s family expressed concern that an open wound from surgery is at risk of infection due to the unhygienic conditions of his cell at East Riffa Police Station.

It has not been clear what kind of treatment Nabeel Rajab is receiving in jail, but Adam Rajab explained that although the police clinic gives “good” treatment, “after the surgery in the military hospital he went through inhumane degrading treatment and he was transferred back to solitary confinement”.

Even the doctors were shocked when Nabeel Rajab was transferred to the Public Security Forces Clinic in Qalaa because under normal circumstances he would have been kept in hospital for a longer period, Adam Rajab explains. “My father is healing from painful surgery, but his health is deteriorating largely due to the conditions he is being kept in.”

He says that the real reason his father is being kept behind bars “is that they can’t risk having him out during this critical time in Bahrain, where severe human rights violations are being committed on a daily basis. Unfortunately, the mighty state fears the voice of one man, and can’t stand having him out”.

According to the Middle East Eye, Bahrain experienced its “bloodiest day” since protests began in 2011 just last week on 23 May. The Bahrain court sentenced Sheikh Issa Qassim to a year in prison for “collecting funds illegally”. As Bahrain’s strongest Shia figure, Qassim’s work includes religious charitable donations, which is common practice in Bahrain.

The day after Qassim’s sentence, violence continued with hundreds injured and 250 in detention, while the internet was cut off.

Despite the deteriorating situation in his country and his current imprisonment, Adam Rajab says his father’s spirits are always high and filled with hope. He says Nabeel Rajab is well aware of the immense support he is receiving around the world and it means a lot to know he’s not alone in his struggle.

If Nabeel Rajab is convicted on both charges he faces 18 years in prison. But he has told his son: “I have nothing to lose and I will not back down whatsoever happens.”

On 22 May 2017, US President Donald Trump visited Bahrain during his first international tour. According to the Middle East Eye, the violent aftermath in Bahrain following President Trump’s visit indicated his “repression of democracy in the Gulf”.

In a letter published in the New York Times in the run-up to Trump’s visit, Nabeel Rajab urgently expressed the need for help, saying US citizens “must all call for an end to the Trump administration’s unconditional support for my country’s misdeeds at home and abroad”.

Adam Rajab reiterated this urgent need for international support: “I believe that without international pressure we will not see him walk out of prison anytime soon.”