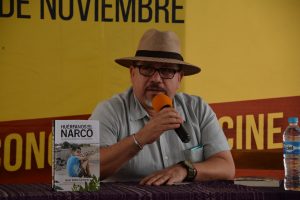 For years, Index on Censorship has covered stories of violence against the media in Mexico. In the first six months of 2017, seven journalists have been killed, a terrifying statistic. To help those researching media freedom in Mexico, we have compiled a reading list of articles from the past five years. It includes details of threats, punishments and pressures faced by Mexican journalists. Students and academics whose universities subscribe to Sage Journals will find all these articles free to read.

Making a killing: A special Index investigation looking at why Mexico is an increasingly deadly place to be a journalist as reporters face threats from corrupt police to deadly drug gangs

Ahead of Mexico’s elections next year, in a special investigation for Index, Duncan Tucker looks at threats to journalists over the past decade.

Parallel lives and unparalleled risks: The author discusses his time reporting from Mexico, how the death of one journalist particularly affected him and introduces an excerpt from his forthcoming novel

Mexico is one of the most dangerous countries to be a reporter today, but these dangers are not spread evenly between local and foreign reporters. Author Tim MacGabhann speaks to Jemimah Steinfeld about why this is the backdrop to his new book and introduces an extract from it

Documenting the truth: Documentaries are all the rage in Mexico, providing a truthful alternative to an often biased media

Documentaries are growing in popularity in Mexico, and have more freedom to broadcast facts and challenge government lies.

Between a rock and a hard place: Mexico’s journalists face threats from cartels, the government and even each other

Alberto Escorcia and Javier Valdez discuss the pressures on Mexican media from all sides: drug cartels, government agencies, and even from other media outlets.  These two reporters explain the difficulties journalists face and note that often there is little police protection from cartels.  Valdez, a globally known journalist, was shot and killed in May 2017.

Shooting from the hip: A new mayor in a Mexican border city believes he will make it less dangerous for journalists

Does local Mexican government have the ability or will to protect journalists? In an interview with Armando Cabada Alvídrez, the mayor of the largest city in Chihuahua (on the border of the United States), and Gabriela Minjares, a co-founder of the Juárez Journalists’ Network, Index on Censorship explores government promises and speculation from journalists on Mexico’s imminent potential for improvement of journalist security.

Mexican airwaves: Interviews with radio journalists who were shut down after investigating presidental property deals

“The level of violence against Mexican journalists has been well documented, but comparatively little is known about the pressures that reporters and their bosses come under when dealing with the government.” Carmen Aristegui, one of Mexico’s most renowned journalists, lost her job and ability to report in Mexico after uncovering allegations of property fraud against President Peña Nieto.

Since the abduction of 43 missing students from Ayotzinapa training college, tensions between Mexico’s academic institutions and government have been at an all time high. In this article, Dr Rossana Reguillo Cruz discusses the case of the missing students, along with the threats she receives on a daily basis after discussing her support for investigations into their disappearance.

In addition to threats and cover-ups, Mexican journalists face increasing pressure from other directions. While much censorship occurs without regard to the law, this article explores how suppression of speech is becoming further integrated into Mexican society.

On the ground: In Mexico City

The Mexican office of Article 19 (the right to freedom of expression), has documented 900 incidents of suppressed expression, aided 100 targeted journalists and received dozens of threats since 2006 (as this article went to press).  Ricardo Gonzalez discusses the challenges and progress of the Article 19 office in the face of increasing crime against journalists, and his hope for justice.

The Olympic Games frequently draw attention to the social and political conditions of their host countries, stirring up protests from the people and censorship from the government. Brian Glanville, originally a sports reporter sent to cover the 1968 Olympics, recounts his experience of media manipulation and student massacres by the Mexican government during the games, explaining the immense importance of international media coverage when local governments cannot be held accountable.