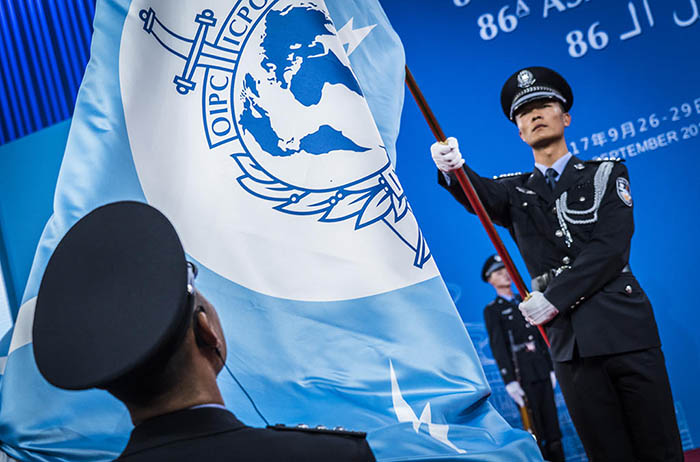 Red notices have become a tool of political abuse by oppressive regimes. Since August, at least six journalists have been targeted across Europe by international arrest warrants issued by Turkey, Azerbaijan, Uzbekistan and Kazakhstan.

“The use of the Interpol system to target journalists is a serious breach of media freedom. Interpol’s own constitution bars it from interventions that are political in nature. In all of these cases, the accusations against the journalists are politically motivated,” Hannah Machlin, project manager for Index on Censorship’s Mapping Media Freedom, said.

In the most recent case on 21 October, journalist and blogger Zhanara Akhmet from Kazakhstan was detained in Ukraine on an Interpol warrant and is currently in a temporary detention facility. Akhmet claims this red notice is politically motivated.

The journalist worked for an opposition newspaper, the Tribune, in Kazakhstan as well as documented human rights violations by the Kazakh authorities on a blog.

Huseynli sought refuge in the Netherlands in 2006 and was granted citizenship two years ago. While leaving Ukraine, the journalist was stopped by Interpol police with a red notice issued at the request of the Azerbaijani authorities. He has been charged with fraud and illegal border crossing.

Because Huseynli holds a Dutch passport, he cannot be forcibly extradited to Azerbaijan, but he told colleagues he fears attempts to abduct him.

“The arrest of the Azerbaijani opposition journalist by the Ukrainian authorities at the request of the authoritarian government of Azerbaijan is a serious blow to the common European values such as protection of freedom of expression, which Ukraine has committed itself to respect as part of its membership in the Council of Europe and the OSCE,” IRFS CEO Emin Huseynov said.

Huseynli’s arrest was the second time in a month that a journalist has been detained in Ukraine on a red notice.

On 20 September, authorities detained journalist Narzullo Okhunjonov, who had been seeking political asylum in Ukraine, under an Interpol red notice when he arrived from Turkey with his family. Okhunjonov writes from exile for sites including BBC Uzbek on Uzbekistan’s authoritarian government. Uzbekistan filed the international arrest warrant for the journalist on fraud charges. He denies the charges against him.

Five days after he was detained, a Kyiv court sentenced Okhunjonov to a 40-day detention while they decide whether to extradite him to his home country.

Since 24 May 2014, Mapping Media Freedom’s team of correspondents have recorded and verified 3,597 violations against journalists and media outlets.

Interpol warrants have also been issued in Spain.

Turkish journalist Doğan Akhanlı was detained while on vacation in Spain on 9 August. The journalist has lived in Cologne since 1992 where he writes about human rights issues, particularly the Armenian Genocide, which Turkey denies.

Turkey charged Akhanlı with armed robbery which supposedly occurred in 1989. After the charges were brought against him in 2010 and he was acquitted in 2011, the Supreme Court of Appeals overturned his acquittal and a re-trial began. Akhanlı faces “life without parole”.

Two weeks later, Interpol removed the warrant and Akhanlı was released. The decision was made after German chancellor Angela Merkel denounced the abuse of the Interpol police agency: “It is not right and I’m very glad that Spain has now released him. We must not misuse international organisations like Interpol for such purposes.”

Markel claimed Erdogan’s use of the international agency for political purposes was “unacceptable”.

Akhanlı’s detention came two weeks after Turkish journalist Hamza Yalçın was detained on 3 August at El Prat airport in Barcelona, where he was vacationing, Cumhuriyet reported. He holds a Swedish passport and has sought asylum there since 1984.

Yalçın is being accused of “insulting the Turkish president” and spreading “terror propaganda” for Odak magazine of which he was the chief columnist, according to a report by Evrensel.

Like Ukraine, Spain’s member state status in the Council of Europe also arises the question of their activity in the arrests of Akhanlı and Yalçın. “The latest cases of arrests of journalists in Ukraine and Spain on the basis of Interpol red notices … have extremely worrying implications for press freedom,” Rebecca Vincent UK Bureau Director for Reporters Without Borders, said. “Interpol reform is long overdue, and is becoming increasingly urgent as critical journalists are now at risk travelling even in Council of Europe member states”.

Turkey’s recent continued persecution of journalists through Interpol also reached as far as Germany. A Turkish prosecutor has requested the Turkish government issue a red notice through Interpol though it is unclear if it went through.

On 28 September 2017, the Diyarbakir Prosecutor’s Office filed an application to seek an Interpol red notice for Can Dündar, the former Editor-in-chief of Turkey’s anti-regime newspaper, Cumhuriyet. The demand for a red notice is based on a speech made by Dündar in April 2016, supposedly supporting the “terror propaganda” of the outlawed Kurdistan Workers’ Party (PKK).

Dündar fled Turkey for Germany in 2016.

On the same day, Peace Research Institute Oslo (PRIO) nominated Dündar and the Cumhuriyet newspaper for the Nobel Peace Prize.

“Turkey is no exception to using this system just as is Russia, Iran, Syria, and its close neighbour and ally Azerbaijan among other governments, where political direction does not necessarily align with democracy, respect for human rights and basic freedoms,” Arzu Geybulla, an Azerbaijani journalist and human rights activist said. “Targeting its citizens who have escaped persecution and have been forced to flee as a result of their opinions, is a worrying sign especially at a time, when over 160 journalists are currently behind bars in Turkey and thousands of people have lost their jobs, been arrested or currently face trials in the aftermath of the July coup.”

Although PACE has adopted a resolution condemning the abuses of Interpol red notices, a review of Interpol’s red notice procedure has yet to be adopted. Amid criticism from human rights activists, journalists, and even leaders like Angela Merkel, it is unclear if Interpol will make a change to their red notice regulations.