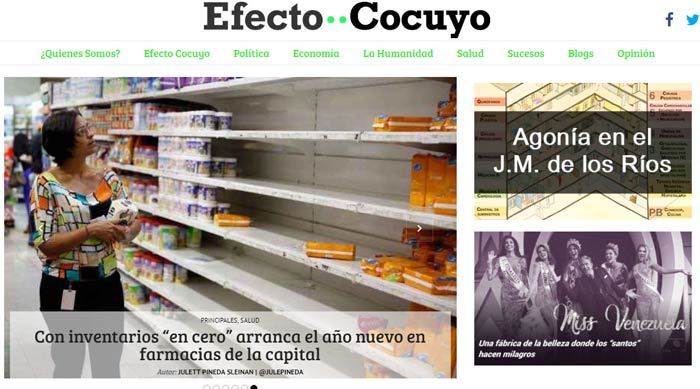 Latin America is home to a growing number of independent publications, like Venezuela’s Efecto Cocuyo, that do not depend on government advertising

With general elections scheduled in six Latin American countries this year, and another six to follow in 2019, the relationship between the media and democracy could have a major impact on the future of the region. However, mounting financial pressures are robbing many media outlets of their objectivity and forcing them to toe pro-government lines.

With traditional advertising revenue in decline, Latin American governments are using vast publicity budgets to keep cash-strapped publications afloat. In return, the media are expected to portray their benefactors in a favourable light.

According to the NGO Freedom House, much of the media in Brazil, Colombia, Ecuador, Honduras and Mexico is heavily dependent on government advertising, resulting in widespread self-censorship and collusion between public officials, media owners and journalists.

“The history of journalism in Latin America is a history of collusion between the press and powerful people,” said Rosental Alves, a Brazilian journalist and founder of the Knight Center for Journalism in the Americas, in an interview with Index. Sections of the media have become subservient, he explained, as any critical coverage could be punished with audits or a loss of advertising revenue.

Financial pressures on the media are particularly pronounced in Venezuela. Alves observed that the Nicolás Maduro regime has applied “waves of censorship” to the media by first decrying it as “the enemy of the people” and then buying up media companies to “make them friendly.”

This is compounded by Venezuela’s severe economic problems and the virtual government monopoly on newsprint supplies that have led to newspaper closures, staff cutbacks and reduced circulation of critical media.

Mexico’s government has taken the more subtle approach of co-opting swathes of the media through unprecedented expenditure on advertising. According to the transparency group Fundar, President Enrique Peña Nieto has spent almost £1.5 billion on advertising in the past five years, more than any president in Mexican history. On top of that, state and municipal administrations have also spent millions on publicity in local media.

Darwin Franco, a freelance journalist in Guadalajara, told Index that government spending has led to some publications telling reporters “who they can and cannot criticise in their work.”

Then there is the infamous chayote, a local term for bribes paid to journalists in return for favourable coverage. Franco said Mexican reporters are particularly vulnerable to economic pressures or under-the-table incentives because it’s so hard for them to make a living.

“Freelance journalists in Mexico don’t receive the benefits that employees are legally entitled to,” he said. “National media outlets — and even some international ones — pay us minimal fees for stories, which in some cases don’t even cover the costs of reporting.”

Franco, who also teaches journalism at a local university, added that many reporters take on second jobs to supplement their income. With Mexican journalists making less than £450 per month on average, he acknowledged that “there may be people who are tempted” to take money from the government.

Despite these financial pressures, Alves is encouraged by the technology-driven democratisation of the media across Latin America, with increased internet penetration and the affordability of smartphones allowing people who could not afford computers to access nontraditional media for the first time.

These include rudimentary blogs, social media accounts and more sophisticated media startups, Alves said, with countries like Argentina, Brazil, Colombia, Mexico and even Venezuela home to a growing number of independent publications that do not depend on government advertising.

“We are living a time of the decline of advertisements as the main source of revenue for news organisations. On the one hand you have this huge decline in traditional advertising because of Google and Facebook getting all this money, and on the other hand you see the virtual disappearance of the entry barriers for becoming a media outlet,” Alves noted.

“We’re moving from the mass media to a mass of media because there’s this proliferation of media outlets that don’t depend on a lot of money,” he added. “If you can gather some philanthropic support or membership, or you’re just doing it by yourself, like many courageous bloggers are doing in many parts of the region, you don’t make any money but you don’t spend any money either.”

Survey: How free is our press?

Are you a working journalist? Do you want to see better protections and freedoms for reporters?

This survey aims to take a snapshot of how financial pressures are affecting news reporting. The openMedia project will use this information to analyse how money shapes what gets reported – and what doesn’t – and to advocate for better protections and freedoms for journalists who have important stories to tell.

Commercial interference pressures on the UK’s regional papers are growing. Some worry that jeopardises their independence.

Commercial pressures on the media? Anti-establishment critics have a ready-made answer: of course, journalists are hostage to the whims of corporate owners, advertisers and sponsors. Of course, they cannot independently cover issues which these powers consider “inconvenient”.

Forget fake news. Money can distort media far more disturbingly – through advertorials, and through buying silence. Here’s what we’re going to do about it.

Read more
Load more
Duncan Tucker
Duncan Tucker is a journalist based in Mexico who writes regularly for Index on Censorship magazine.
Latest posts by Duncan Tucker (see all)