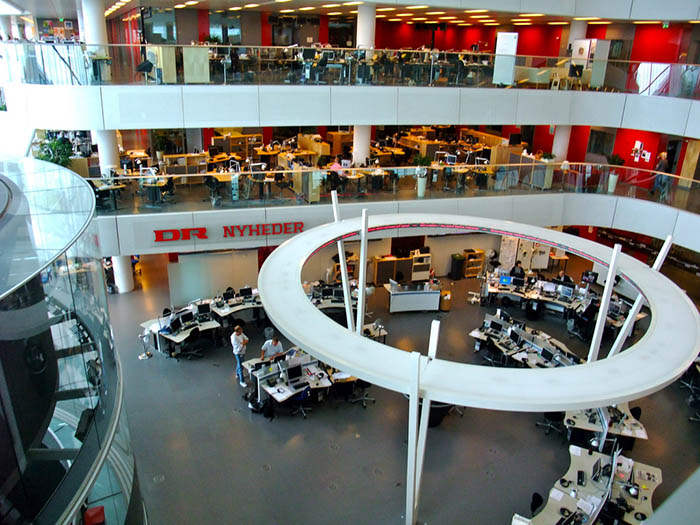 Known across Europe for its journalistic quality and as an exporter of hit political dramas, Danish state broadcaster DR will this autumn be forced to make unprecedented layoffs in what some are calling an act of “revenge” by the government.

In a package of media reforms agreed by Denmark’s governing right-wing coalition, DR is to have its funding cut by 20% and will be forced to let several hundred staff go as a result.

A significant driver of the cuts is the right-wing populist Danish People’s Party (DF), a political movement founded in the mid-1990s that has grown to become a supporting partner of the conservative coalition government. DF politicians have been known to discredit public media outlets and encouraged voters towards alternative websites pushing strongly nationalistic content, with DR often caricatured as a hotbed of left wingers and politically correct liberals.

One longtime editor from DR’s current affairs team, who wished to remain anonymous, said he believes the cuts are a clear political power play: “This thing about DR being left wing goes 50 years back to the days when DR was a monopoly in Denmark when it was accused of being biased, but the funny thing is that all the DR stars that went into politics over many years all have gone to right-wing parties. In the past, there have been examples of DR leaning a little to the left, but nothing on the scale of what they’re being accused off; it simply makes no sense.”

Thoughts have now turned to where exactly the cuts will bite, combined with anger among DR journalists at what they see as a personal attack.

“This will cost around 600-700 jobs and people will get the sack in October,” says the editor. “Are they pissed off? Of course they are, because they feel it’s unjust. The budget of DR is £450 million a year and employs about 3,000 people. Yes, there’s room for cuts, they just have to be based on facts and necessities and not the whims of vengeful politicians.”

Traditionally DR has used large-scale audience capture to divert viewers and listeners towards its more educational and politically analytical content. Journalists fear that by being forced to hand over more popular content to commercial and entertainment-only channels, it will end up shedding audience share, which will then be used as a political justification for further cuts in public spending. The government has also removed the public broadcaster’s first refusal on international sporting events which bring in large numbers of viewers, much to the delight of commercial broadcasters.

DR’s politically cautious general director, Maria Rørbye Rønn, has said that the cutbacks will have serious consequences for the organisation’s users, viewers and listeners. Unions have been more forthright, with DR’s most senior union representative, Henrik Friis Vilmar, telling colleagues in an open letter: “[T]he ambitions of the Danish media are to my mind especially important at a time where Danish-produced critical news is more important than ever in order to stem the tide of fake news and troll factories.” Friis Vilmar went on to warn that the ability of DR to critically observe Danish society was at serious risk.

Morten Østergaard, a member of parliament for the opposition Danish Social Liberal Party, has described the cuts as a “vendetta against DR”, while the Social Democrats have also refused to back the government deal, claiming that cuts will mean less Danish content and less coverage of life in Denmark, which would also negatively impact the Danish democratic system.

The government has responded that it is saving Danes money by effectively giving them a small tax break, though the difference this will make to people’s personal finances is negligible, with people saving at most around 160 euros a year. As part of the package of reforms the government is abolishing the current system of media licences and instead financing DR through the tax system.

DR was founded in 1925 and has a reputation for being one of Europe’s most developed and innovative public broadcasters. In 2007 it moved to a new high-tech media campus on the south side of Copenhagen and currently runs six different TV channels and eight radio channels, including a comprehensive local radio network.

The opposition parties in the Danish parliament have said that they will restore DR’s funding if they win the next election. This might be welcome news for public service journalists, but with the axe hanging over so many of its staff, the next round of elections will see a leaner public broadcaster painfully aware that its detractors in power are watching its every move.

Incidents reported to Mapping Media Freedom since 24 May 2014.