AWARDS
ECRF: As long as there are people defending human rights in Egypt, there is hope
09 Jan 2019
BY PERLA HINOJOSA

Ahmad Abdallah of Campaigning Award-winning Egyptian Commission for Rights and Freedoms at the 2018 Index on Censorship Freedom of Expression Awards (Photo: Elina Kansikas)

The Egyptian Commission for Rights and Freedoms, winner of the 2018 Index on Censorship Freedom of Expression Award for Campaigning, is one of the few remaining human rights organisations in Egypt, a country that often uses its struggle against terrorism as a justification for its crackdown on human rights. What’s more, in 2018 the group expanded its reach, opening new offices around the country, continuing to highlight human rights abuses and providing support for those facing repression.

In May 2018, Amal Fathy, wife of Mohamed Lotfy, executive director of ECRF, was arrested and charged with “spreading fake news” after posting a video in which she criticised the government and recounted her experiences of sexual harassment on the streets. She was later also charged with “belonging to a terrorist group”, for reasons that have yet to become clear. In late December 2018, Fathy was released, although remains under house arrest. Days later an Egyptian court upheld a two-year prison sentence against the activist, raising fears she could again end up behind bars.

Despite the difficulties it faces, it’s “business as usual” for the group and its work. Index spoke with three ECRF co-founders, Ahmad Abdallah, head of the board of trustees, Lotfy and Mohamed Sameh, international relations advisor to talk about these issues.

How is Amal doing and what has life been like since her release?

Mohamed Lotfy: There are ups and downs at the moment. Of course, she is very happy to be free, finally. However, she is anxious after the two-year verdict issued on the 30 December. We live day by day and we don’t know what might happen.

Ahmad Abdallah: Amal is very tired, she still needs medication. She used to have depression problem and it deteriorated while she was in jail. She has had a horrible experience. With her two year sentence, she can be picked up anytime. She was released on probation and is not allowed to leave the house. She goes to the police station every week. The two-year sentence was harsh and she can be taken any time. She is not well yet, she still needs medical care.

What does it mean to have Amal home?

Lotfy: It means a lot. It means that our family is reunited. The boy can stay with his mother and father in the same place after spending almost eight months without the two of us. I was visiting my family or her family where he was staying but now, for the first time in eight months, he can see his father and mother every day at home. It’s a big change for him, for her and for me as well. It’s a feeling of home.

Abdallah: It was very good to see them together once again. It was very good for her son to see her. We expected that we could start her treatment but, unfortunately, a couple of days later she took a very harsh sentence. We are all disappointed and sad. Amal is a good person — she shouldn’t be in jail.

Lotfy: I made an official request to the National Council for Human Rights asking for a presidential pardon after the court gave Amal two years prison. The ruling is a very negative message to send to Egyptian women, to say that a victim of sexual harassment could be imprisoned for calling out this plague while harassers remain free. There is a whole social and political dimension to this. If Amal is imprisoned women will be discouraged from taking any legal steps or speaking out against sexual harassment and this is highly problematic. This can be dealt with a presidential pardon.

People continue to be arrested in Egypt, from academics and lawyers to journalists and activists. How do you view the current situation in the country and do you see any signs of hope for improvement?

Lotfy: The image is very bleak. We’ve seen no progress in the last year. We hoped that there would be less crushing of the dissident and fewer arrests against dissidents after the presidential elections. However, these arrests continued and disappearances and torture have continued. The same record on human rights continued throughout 2018. But as long as there are people who are trying to make things better and defending human rights in Egypt, then there is hope.

What was it like for Mohamed Sameh to meet with fellow Index award winners the Cuban Museum of Dissidence when he was in London? What struggles and hopes do you think you both share for your home countries?

Mohamed Sameh: It was great to meet with the fellow Index award winners the Museum of Dissidence in London. We share many views and very similar challenges and it was wonderful such a connection across the Atlantic. Building bonds of trust is essential not only for our work, but also showing us in practice that we are not alone in our struggle. It helps putting the challenges we face in perspective. When we heard of their arrest in December, they were no longer only names, but friends who needed our support. We are happy and proud that we stand together.

ECRF recently opened two new offices in Egypt, in Aswan and Mansoura. Why were new offices necessary and how will it allow you to realise the aim of becoming more digital and ensuring the safety of both yourselves and those you work with?

Lotfy: One of the critiques of human rights organisations is that they are very centralised in Cairo and don’t reach out enough to the population outside of the capital. This is very true, so we are trying to deal with this weakness by investing more time and resources and personnel elsewhere in areas that have needs that are a bit different. Cairo being a big city has mainly civil and political rights needs, while other areas have more human rights issues that have to do with health, economic rights, environment, labour rights and so on. We have to be able to care about the main civil and political rights that we find a lot in Cairo and the specific needs of areas in Egypt like Aswan and Mansoura. 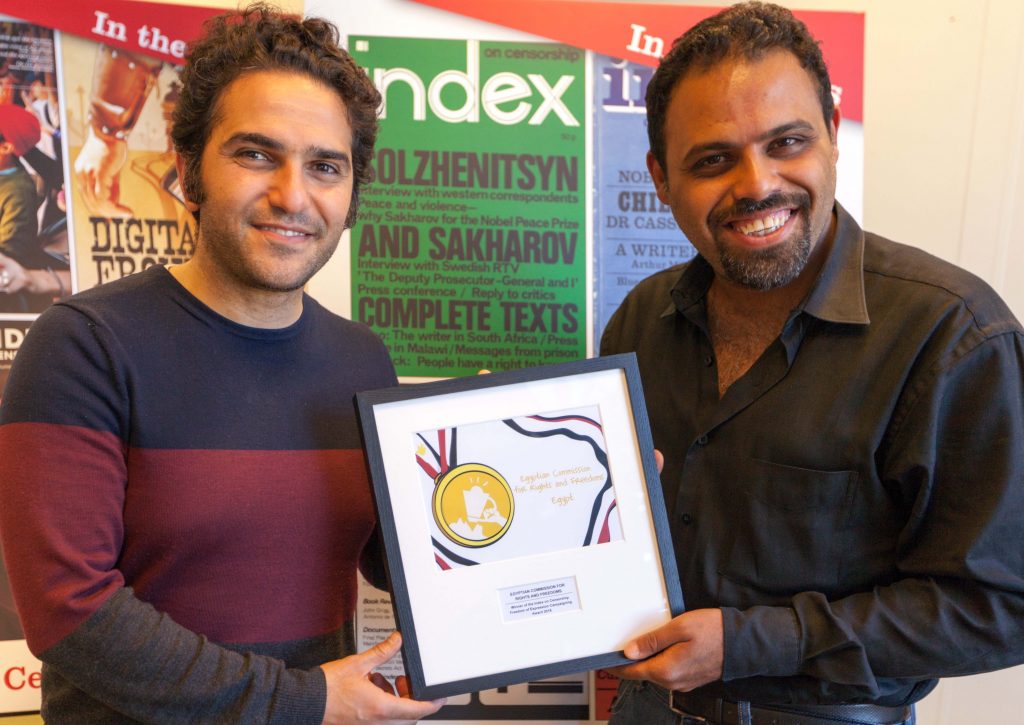 What does the Index on Censorship Fellowship mean to ECRF?

Lotfy: The fellowship from Index on Censorship has been very useful in opening our channels of communication with technology experts, with capacity building for staff members and senior members of management. But also, in the case of Amal, specifically, I was astonished by the amount of interest that Index has shown to the case of my wife either through publicity, lobbying but also through the complaints made to the UN. These were outputs and help that I did not expect and found very useful and freed my wife as well.

When members of our team travelled to Berlin for training in digital technologies, they exchanged ideas ideas about preparing the ground for the future of our human rights work and for the future generation of human rights activists that is more engaging, technology-oriented, secure and allows for a much bigger outreach of people interested in human rights.

Abdallah: The fellowship has really given us huge opportunities to improve and to progress in our work. It has opened new doors, especially in the use of technology in human rights.

Sameh: The Index award has been of utmost importance to us. It introduced us to a new terrain of co-operation and perspective. The dynamic it has created within our team has been vital for many of the steps we have undertaken since April 2018.

Lotfy: We continue to do our work. Business as usual. Every day we are still around and able to fight for human rights is a victory in the difficult circumstances we work in.

About Latest Posts Perla HinojosaPerla Hinojosa is Index’s Fellowships and Advocacy Officer. Originally from Belize, Central America, she received her bachelor’s degree in international studies from the University of South Florida and recently completed her master’s degree from Swansea University in development and human rights. She has experience in advocacy, grassroots organising and campaigns in […]

Mohamed Lotfy, executive director of the Egyptian Commission for Rights and Freedoms, the organisation that won the 2018 Index on Censorship Freedom of Expression Award for Campaigning, has been awarded the Franco-German Prize for Human Rights and the Rule of Law

Fathy has been in pre-trial detention since her arrested after publishing a video criticising sexual harassment in Egypt, during which time she has shown symptoms of acute stress and has been unable to walk unassisted