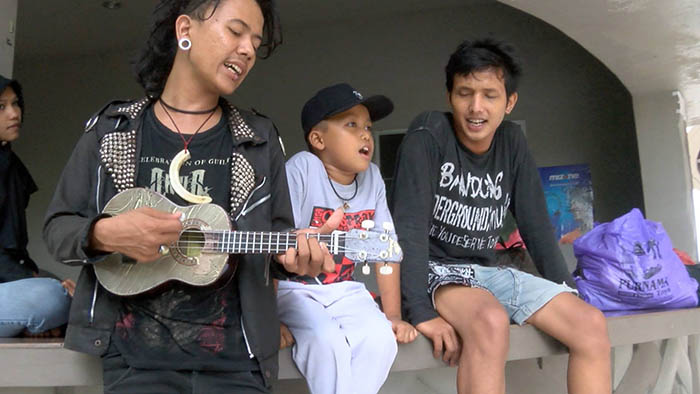 Still from Street Punk! Banda Aceh, a documentary about Indonesia’s punk scene and the difficulties it faces from religious fundamentalism.

Index on Censorship is deeply concerned that a draft bill in Indonesia would limit musicians’ freedom of expression.

The Music Bill seeks to ban content deemed blasphemous or pornographic, as well as preventing creators including any content driven by “negative” foreign influences.

“This is the latest in a number of attempts globally to force artists to produce only government-sanctioned work,” said Index on Censorship chief executive Jodie Ginsberg. “We fully support Indonesia’s artistic community in opposing the bill and ask the government to drop plans to censor music in the country.”

Indonesian artists immediately formed the National Coalition Against the Music-Making Bill and drew support from the country’s music community, creative professions and the national media.

In a statement, the coalition pointed out that articles within the bill lack clear parameters, marginalise and silence independent musicians, and sanction bias against many musicians. There is also little clarity about what exactly is being regulated and by whom.

Many elements of the bill also overlap with Indonesian laws such as the Copyright Act, the Handover Act of Print and Record Works, and the ITE Law. The bill also goes against the Law on Promoting Culture and goes against Article 28 of the 1945 Constitution, which upholds freedom of expression in a democratic country. The coalition has also initiated a public petition which has close to 300,000 signatures.

Indonesia’s draft legislation follows the introduction of Decree 349 by Cuba, which forces artists to register with the government, and the Uganda’s government is proposing regulations that envision vetting new songs, videos and film scripts prior to their release, and official registration for creatives.

Why a naked feminist statue should remain uncensored

Maggi Hambling’s A Sculpture for Mary Wollstonecraft has been roundly criticised, with some trying to censor its nakedness

In September 2019, London-based photographer Yumna Al-Arashi announced that one of her photographs, showing women in a hammam, had been taken down by Instagram because, according to the platform, it fell foul of the community’s standards on adult nudity. Name of Artwork: Shedding Skin Artist: Yumna Al-Arashi Date: September 2019 Brief description of the artwork [...]