MAGAZINE
Is press freedom going to be an issue in the next European election?
18 Apr 2019
BY SALLY GIMSON

Responding to violations of media freedom in Hungary has become a conundrum for the EU. With populist parties poised for large gains in the next European election, Sally Gimson explores in the spring 2019 issue of Index on Censorship magazine what the EU could do to uphold free speech in member countries 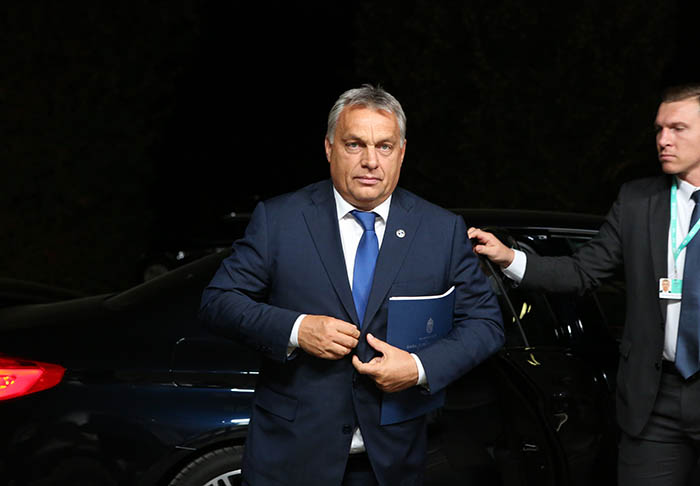 Dutch MEP Judith Sargentini is enemy number one in the eyes of the Hungarian government. The Green politician incurred that government’s anger when she persuaded the European Parliament to the country losing voting rights.

She accused Hungary, among other democratic failings, of not ensuring a free and uncensored press. But since the vote last September, nothing has happened, except that the Hungarian government launched a campaign against her on state television – and she no longer feels safe to travel there.

“[The government] has been spreading so much hate against me, and if the government is spreading hate, what if there is a lunatic around? I’m not taking the risk,” she said.

“The Hungarian government spent 18 million euros on a publicity campaign against me, after I won the vote – with TV commercials and a full-page advertisement with my face on it.” The other vocal critic of Hungary, Belgian Liberal MEP and former Belgian prime minister Guy Verhofstadt, as well as the philanthropist George Soros were targeted in the same campaign.

With the European elections coming up in May 2019, and the possibility of large gains by nationalist, populist parties, the question is what the EU can do to curb freedom of expression violations on its territory.

The problem according to Lutz Kinkel, managing director of the European Centre for Press and Media Freedom, is the EU has no specific competences over media freedom. No country can join the EU without guaranteeing freedom of expression as a basic human right under Article 49 of the Lisbon Treaty. Article 7 is triggered when there is “a clear risk” of a member state breaching EU values. Although this can lead to a country’s voting rights being taken away, to get to that point, all the other EU countries have to agree.

As Camino Mortera-Martinez, a senior research fellow at the think-tank Centre for European Reform in Brussels, said: “Article 7 is never going to work because it is so vague. [All the other] member states are never going to argue to punish another one by suspending voting rights.”

Historian Tim Snyder, author of The Road to Unfreedom, a book about how Russia works to spread disinformation within the West, told Index he thought Hungary should have been thrown out of the EU a long time ago. But, with Britain’s exit from the EU, it is difficult to start expelling countries now.

“The tricky thing about the European Union, and this goes not just for eastern Europe but everyone, is that there might be rules for how you get in, but once you are in the rules are a lot less clear,” he said.

It's like joining a sorority with very strict rules for entering, but when you are there you can misbehave and it is covered up by the group

Hungary is the most prominent country in Europe to put restrictions on media freedom. Not only is public service media directly under government control, and critical journalists have been fired, but the government has also made sure that private media has either been driven out of business or taken over by a few oligarchs close to Prime Minister Viktor Orbán. The only independent media are very small operations, publishing almost exclusively on the internet.

Snyder told Index: “I think Europeans generally made the mistake of thinking that it doesn’t matter if we have one small country which is going the wrong way [and that] Hungary can’t possibly affect others. But the truth is – because it is easier to build authoritarianism than democracy – one bad example does ripple outwards and Hungary isn’t just Hungary and Orbán isn’t just Orbán; they represent a kind of mode of doing things which other people can look to, and individual leaders can say: ‘That’s possible’.”

This is borne out by Index on Censorship’s Mapping Media Freedom project which tracked media freedom in 43 European countries and found patterns that showed countries following Hungary’s example including Poland.

Anita Kőműves is an investigative journalist in Hungary who works for non-profit investigative outlet Átlátszó.hu which won an Index award for digital activism in 2015. She says not only does Brussels do nothing to challenge Hungary’s undermining of the free press but people in the commission are persuaded it is not all that bad.

She said: “Orbán is walking a fine line with Brussels. He knows that he cannot go too far. Whatever happens here, it must be deniable and explainable. Orbán goes to Brussels, or sends one of his henchmen, and he explains everything away. He has bad things written about him every single day in Hungary and nobody is in jail, so everything is fine… everything is not fine. Freedom of speech, the fact that I can write anything I like on the internet and nobody puts me in jail, is not the same as freedom of media when you have a strong media sector which is independent of the government.”

The solution for Brussels, she argues, is not Article 7 but for the EU to use European competition law to challenge the monopoly on media ownership the government and government-backed companies have in Hungary.

Kinkel says that this would be a warning to other countries, such as Bulgaria and Romania, which are trying to control the media in similar ways and in the case of Bulgaria giving EU funds only to government-friendly media.

“Governments try to get hold of public service media: this is one step,” he said. “And the other step is to throw out investors and media they don’t like and to give media outlets to oligarchs who are government-friendly and so on and so on, and to start new campaigns against independent investigative journalists.”

In Poland, the European Commission invoked Article 7 because of the government’s threats to the independence of the judiciary. The government so far controls only the state media but, as journalist Bartosz Wieliński , head of foreign news at the Gazeta Wyborcza newspaper, points out, the government used that state media to hound the mayor of Gdańsk, Paweł Adamowicz, for months before he was assassinated in January this year.

Wieliński believes it was only after Britain voted to leave the EU that countries realised they would face little sanction if they chipped away at freedom of expression. Although the EU did not collapse as they expected, the initial disarray gave them an opportunity to test European mechanisms and find them wanting.

Maria Dahle is chief executive of the international Human Rights House Foundation. She believes financial sanctions could be the way to stop countries from crossing the line, as Poland and Hungary have.

“When allocating funding, it should be conditional,” she said. “If [member states] do violate the rule of law, it has to have consequences … and the consequences should be around financial support.”

But Mortera-Martinez warns if the EU starts punishing countries too much financially, it will encourage anti-EU feeling which could be counter-productive, leading to election wins for populist, nationalist parties. The effect of any populist gains in the May elections concerns Kinkel, also: “What is clear is that when the populist faction grows, they have the right to have their people on certain positions on committees and so on. And this will be a problem… especially for press and media freedom,” he said.

Back at the European Parliament, Sargentini is impatient. “It’s about political will, and the EU doesn’t have it at the moment,” she said. “It’s like joining a sorority [with] very strict rules for entering, but when you are there you can misbehave and it’s covered up by the group.”

Sally Gimson is the deputy editor of Index on Censorship magazine.

The spring 2019 issue of Index on Censorship magazine asks Is this all the local news? What happens if local journalism no longer holds power to account?