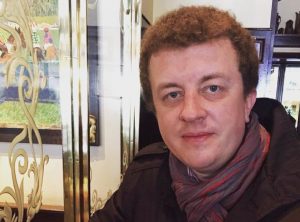 Human rights organisations will today urge UN Human Rights Council Member States to maintain explicit calls for the immediate and unconditional release of Belarusian journalist and human rights defender Andrei Aliaksandrau, who is now facing up to 15 years in prison on baseless charges of “treason to the state”.

Aliaksandrau has long been a defender of freedom of expression in Belarus and beyond, having previously held positions at Index on Censorship and ARTICLE 19, among other media and free speech organisations. He was detained on 12 January 2021, along with his partner, Irina Zlobina and has remained in detention since then.

The charges against Aliaksandrau and Zlobina stem from allegations that they paid the fines of journalists and protesters whom authorities detained during last year’s pro-democracy protests, part of a concerning trend by Belarusian authorities to use the imposition of new legislation to severely limit freedoms of assembly, association, and expression. To date, only Aliaksandrau has been charged with treason.

“The regime has begun to impose tougher charges on those in pre-trial detention to further suppress dissent,” ARTICLE 19 will tell the UN Human Rights Council today. “Andrei Aliaksandrau, a journalist who has been behind bars since January, has recently seen his charges related to public order escalate to more severe charges of high treason under Article 356 of the Belarus Criminal Code.”

“[W]e are gravely concerned for journalist and media manager Andrei Aliaksandrau,” Human Rights House Foundation will tell the UN Human Rights Council. “We call for his immediate release and exoneration.”

The calls from international civil society are part of an Interactive Dialogue at the HRC with the UN Special Rapporteur on the situation of human rights in Belarus, Anaïs Marin. This formal agenda item follows submission of the Special Rapporteur’s regular reporting to the Council. In her report, the Special Rapporteur notes that “several human rights defenders and activists are currently imprisoned for having provided, through their organizations, charity support to persons detained during the post-electoral crackdown in the form of legal assistance or solidarity funds to pay for fines.”

The Special Rapporteur has reported regularly to the Council since the mandate was created in 2012 in response to “the existence of a pattern of serious violations of human rights […] that is of a systemic nature.” The arrest and detention of Aliaksandrau is another example of this pattern and follows the death on 21 May 2021 of political prisoner Vitold Ashurak while incarcerated by the authorities for doing legitimate human rights work.