With Brazilians heading to the polls on the 2nd October, Guilherme Osinski discusses what it has been like to see his country’s rights landscape destroyed by Jair Bolsonaro 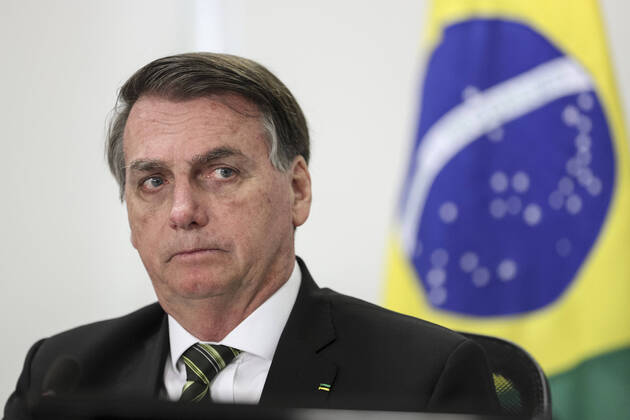 President Bolsonaro has taken over the Brazilian flag as a symbol of patriotism to the country. Photo: Marcos Correa/Zuma Press

I was born in the city of Curitiba, in the south of Brazil, and I was always proud to be Brazilian. Since Jair Bolsonaro came to power on 1 January 2019 though it has been very upsetting to watch what has happened to my country.

Bolsonaro was elected – it wasn’t a coup – but he is not in favour of democracy. In fact he represents everything that a democracy isn’t — an enemy of women, Black people, the LGBTQ+ community and  Indigenous peoples. During his election campaign he propagated hatred with homophobic, misogynistic and anti-environmental rhetoric. Then, as soon as he began his term in 2019, he put all of his words into actions.

To begin with, firearm registration grew in the country. Support for carrying a weapon was one of the pillars of Bolsonaro’s campaign back in 2018. This worries me, as I am totally against arming the population. It makes me distressed to think of the danger that people I love are in with more guns out there. Bolsonaro relies on the premise that Brazilians have a way to defend themselves against bandits and criminals, but he forgets the main focus, which should be greater investment in public safety, better working conditions for police officers and more educational resources — the only possible way to reduce crime in the country.

An incident on 9 July in the city of Foz do Iguaçu is one example of how gun ownership can have terrible consequences. Municipal guard Marcelo Arruda, treasurer of the Workers’ Party, was celebrating his 50th birthday at a private party when he was shot dead by federal prison agent Jorge Guaranho, a supporter of Bolsonaro. It was a political crime. Arruda supported left-wing candidate Lula and Bolsonaro has been known to promote violence against those with opposing political views, as he did in 2018 when he encouraged his supporters to “shoot the petralhada” (a reference to left-wing supporters) on a visit to the state of Acre.

This incident also raises concerns over freedom of expression in Brazil. Is it no longer possible to support a candidate who is against the current government without automatically becoming the target of violent and radical people?

Bolsonaro is clearly not concerned about the high rates of deforestation in the Amazon and Pantanal region. The situation in the Amazon received a lot of attention in June with the murder of British journalist Dom Philips, together with Indigenous activist Bruno Pereira, who were exposing the scale of environmental destruction at the moment. Their murders were awful, in general and for their families. They also spoke more broadly of Bolsonaro’s disregard for the lives of Brazilians.

For me, Bolsonaro represents death. It is difficult to forget his neglect of the Brazilian people in the worst moments of the Covid-19 pandemic. Since the pandemic started he adopted denialism. He encouraged the use of ineffective drugs and delayed the purchase of vaccines. As a result, people close to me saw family members and friends die from a disease even after the vaccine became available. My family and best friends received their first dose of the vaccine months after those in the UK did, a wait that made me anxious. (As an aside, because of Bolsonaro’s reckless actions, Brazil was on the UK travel red list for almost a year. I couldn’t go back to Brazil and no one could visit me in England. It was 10 months of loneliness, not knowing when I would see the ones I love the most.) In the end, Bolsonaro is partly responsible for the death of hundreds of thousands in Brazil from Covid. How can I not be disgusted by a president who, when asked if he had any words of solidarity with the victims’ families, said “I’m not a gravedigger, OK?”

In Bolsonaro’s Brazil, journalism has also been devalued and attacked with alarming regularity. The president himself has verbally attacked journalists. Examples date back decades and are many, but you don’t have to go back decades to find them. A couple of weeks ago will do. On 28 August, during a presidential debate when journalist Vera Magalhães criticised Bolsonaro’s approach to the Covid-19 pandemic, he called her a “disgrace to Brazilian journalism”. And just this week, he lashed out at the journalist Amanda Klein. When Klein asked Bolsonaro about his finances related to property acquisitions, he said:  “Amanda, you are married to someone who supports me”. The journalist promptly answered by saying that her personal life was not on the agenda, which was followed by Bolsonaro questining why his was. “Because you are a public person. You are the president,” she responded, correctly.

These two journalists also shared another thing in common – their gender. Bolsonaro’s contempt and awful treatment towards women is widely known in Brazil. In 2003, for example, he told the politician Maria do Rosário that he wouldn’t rape her because she didn’t deserve it. Eleven years later, he elaborated by saying that she didn’t deserve to be raped because she was ugly and not his type. And yet there are still women who vote for him, something I just can’t understand.

Bolsonaro took over the Brazilian flag with his motto “God above all, Brazil above all”. Before him, when I saw the green and yellow flag – which I think is one of the most beautiful in the world – in houses or on the streets, it was usually people cheering for Brazil on the day of a World Cup match. Today, it’s difficult not to associate the flag with Bolsonaro supporters.

Bolsonaro does not represent me, nor the millions of other Brazilians who have taken a stand against his atrocities. Brazil is much bigger than Bolsonaro. It is a country of exuberant beauty and many kind and generous people. I am proud to be Brazilian and that will never change. One day Bolsonaro will be held accountable for all his actions. Hopefully that day is soon.