On the east coast of the USA around 100 children have sent postcards to a man they do not know who is incarcerated over 8,000 miles away. The man is Jimmy Lai, the Hong Kong media mogul and activist.

The postcards have provided a brief ray of light in an otherwise dark chapter for a man locked up for his political beliefs, and the city state of Hong Kong which is currently in the ever-tightening grip of the Chinese Communist Party (CCP).

Lai is imprisoned on charges most us will, hopefully, never have to face. The billionaire publisher and founder of Apple Daily has been jailed since December 2020 after he lit a candle during a public commemoration of the 1989 Tiananmen Square massacre.

The charges were related to this and his other pro-democracy protests. He is perhaps the most high-profile victim of the National Security Law, which was passed in the summer of 2020 with the precise aim of punishing and stifling dissent. This month he faces a trial without jury, where he will plead not guilty to the national security charges. 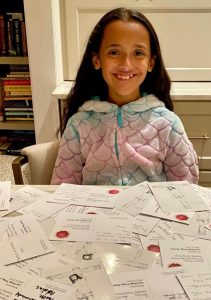 April Ponnuru’s daughter with the postcards.

April Ponnuru has organised the campaign on behalf of The Committee For Freedom in Hong Kong Foundation (CFHK). It was her idea for children at her daughter’s school, in Virginia, to send supportive postcards to Lai after learning he is a devout Catholic.

“My children are in a Catholic school and are Catholic, and I was thinking about how Catholics believe in the idea called corporal works of mercy, and they are these physical acts we do for people that import a lot of grace and mercy, and one of those is visiting the imprisoned,” she said.

She explained how Lai being persecuted for his ideas and belief – not only political but also regarding his faith – inspired her to contact her children’s school.

“This is a great example for these kids of somebody who stood up for their faith and is suffering unjust consequences for that. I thought they could write postcards to Jimmy and tell him they know a little bit of his story, and they’re praying for him and admire him.”

Lai is currently held at Stanley Prison, a maximum-security facility in Hong Kong where he has spent time in solitary confinement. Already a believer, he has found strength through his faith. A drawing of Jesus Christ on the cross done by Lai from prison was printed on the postcards the children sent.

This drawing was originally published in Index on Censorship’s spring 2022 magazine, alongside letters of his, many of which reference his faith.

Ponnuru said: “We thought it would be nice to include some religious art by Jimmy, and it would be a really meaningful thing that this art he sent out in the world would come back to him from a lot of children. For the children it was a great way to participate in corporal works of mercy that they ordinarily wouldn’t be able to do so. By sending him a card and message, they are visiting him.” 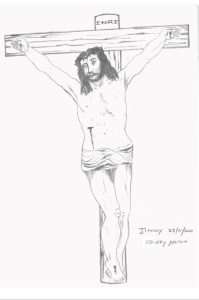 She is eager to point out that she wants any child to have the opportunity to send a postcard, as the message of the project should not be defined just by Catholicism.

“This isn’t limited to Catholic schools. We would love any child to participate, children of all faiths and no faith. It’s about understanding the injustice of what is happening to Jimmy and others in Hong Kong. This pilot programme is just the beginning, and we would be very happy to create a postcard that would be appropriate for students at public and other schools to send as well,” Ponnuru said.

“Overall, a number of people have said to me they would love to bring it to their school, and priests have told me they are interested in copying the programme. We are going to write to other schools to encourage them to join the project.”

It’s understood the postcards were received in prison within three months of being sent, and that Lai is being allowed to read one daily, enabling him to have regular contact with the outside world.

If you would like more information about the project, and to request postcards for Jimmy Lai, please contact [email protected]. 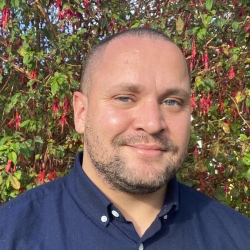