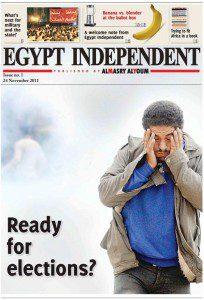 The life of a two-week old English-language newspaper, Egypt Independent, was abruptly put on hold last week after its Editor-in-Chief, Magdi El-Gallad, decided to censor an opinion piece by US historian and author Dr Robert Springborg that was critical of the military and its leadership.

The article, entitled “Is Tantawi reading the public pulse correctly?”, said that Field Marshal Hussein Tantawi, who leads Egypt’s ruling Supreme Council of the Armed Forces (SCAF), could share the same fate as former president Hosni Mubarak and find himself in jail as a result of popular discontent with his management of the revolution’s transition process.

Dr Springborg concluded by saying that “discontented officers not in the SCAF might decide that a coup within the coup would be the best way to save the honour of the country and their institution.”

This open critique of the military and implications of rumblings within army ranks crossed a major red line in Egypt’s press freedom: criticism of the military.

After the opinion piece was censored and toned down, the distribution of 20,000 copies of Egypt Independent’s second issue, due to come out on 1 December, was still prevented.

Egypt Independent was the new name adopted for Al-Masry Al-Youm’s English language edition, which has existed online for two years. Its management is affiliated with the privately-owned Arabic language daily Al-Masry Al-Youm, a widely read and popular newspaper in Egypt.

The printed version has been put on hold for now. But, the life of its daily online version, Al- Masry Al-Youm English, continues.

The whole experience has brought to the fore the fact that overt criticism of the military remains a red line with serious consequences that few are willing to cross.

Magdi El-Galad presumably has close ties with the military as he was recently offered, though turned down, the position of information minister in the cabinet of SCAF-appointed Prime Minister Kamal El-Ganzouri.

An old-fashioned mentality also remains about the power of the printed press versus its online counterpart. Some think that had Dr. Springborg’s piece been published online, it may not have been censored.

This is ironic given the fact that the internet, especially Facebook and Twitter, played important roles in initiating the revolutions of Tunisia and Egypt last winter, and continue to be essential information-sharing tools.

But it was a newspaper article published in the Arabic-language daily, Al-Shorouk, written by activist and blogger Alaa Abdel Fattah that landed him in jail in October.

He wrote about the death of activist Mina Daniel during the army’s attack on peaceful Coptic protestors at Maspero, an area of Cairo known for housing the state television building. This left at least 29 people dead.

Alaa remains in a military jail, alongside blogger Maikel Nabil Sanad, whose critical writings of the military also led to his imprisonment. He has been on a hunger strike for over 100 days.

Dina Abdel Rahman, a television presenter on the privately-owned Dream TV, was also fired in July for reporting on a newspaper article, which was critical of the SCAF.

Dina’s incident, as well as that of Egypt Independent, raise fears among journalists, and those concerned with freedom of the press that while under Mubarak it was mainly the state that intervened to curb criticism in the press, now the owners of private media, supposedly the freest in Egypt, and editors themselves are practicing self-censorship at the behest of the military.

But “self-censorship has always existed”, Naila Hamdy, assistant professor at the American University in Cairo’s department of journalism, told Index. “There were a couple of months of real freedom after 25 January, and although some may have reverted back to self-censorship, journalists are still bolder than they were before the revolution.”

She added: “Media professionals might hold back, because they decide it is better than getting shut down completely. It might be better to push the envelope slightly, than with no publication at all.”

And, how far the envelope can continue to be pushed depends on the success of the transition process from military to civilian rule, a process underway as Egypt conducts parliamentary elections.

2 responses to “Egypt: self-censorship and the military hinder press freedom”