The arrest of an anti-corruption cartoonist in India on sedition charges has sparked outrage. Marta Cooper reports

Indian anti-corruption cartoonist Aseem Trivedi has been arrested and charged with sedition, Index has learned.

Trivedi, 25, was held in Mumbai over the weekend for displaying cartoons allegedly mocking the Indian constitution during an anti-corruption protest in Mumbai last year led by campaigner Anna Hazare. Trivedi was charged with sedition under Section 124 (A) of the Indian Penal Code, and also charged under the IT Act and the 1971 National Emblem Act for insulting India’s national symbols.

Last week Trivedi claimed he would surrender to Mumbai police, who had issued an arrest warrant for him. In January a case of treason was filed against Trivedi, with additional charges brought against him by the Mumbai High Court for insulting India’s national symbols.

In a statement yesterday, Justice Markandey Katju, chairman of the Press Council of India, defended the cartoonist. “My opinion is that the cartoonist did nothing illegal. In a democracy many things are said, some truthful and others false,” Katju said. Speaking to the Wall Street Journal on Friday, Trivedi said his cartoons “did nothing but tell the truth.” 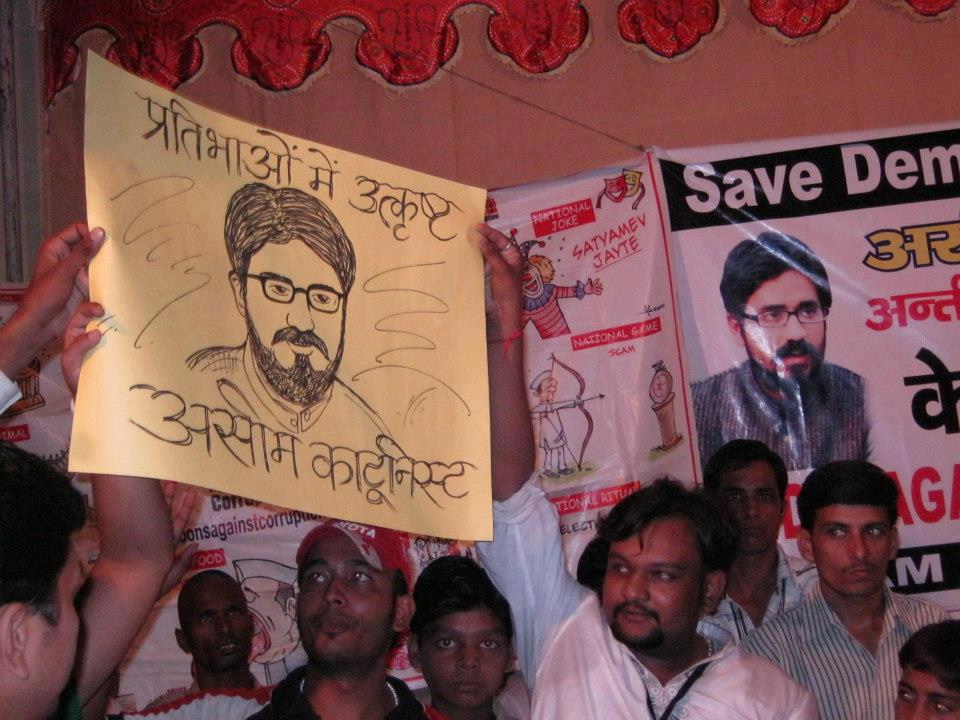 “It is stupid for the government to react this way,” Kunal Majumder, principal correspondent at Tehelka.com told Index.

“Sometimes it’s funny we call ourselves the largest democracy on earth,” he added.

Trivedi’s case is not the first time cartoons have stirred controversy in India. In May this year, various parliamentarians raised objections to cartoons appearing in educational textbooks which lampooned BR Ambedkar, who drafted the country’s constitution.

Majumder sees Trivedi’s arrest as part of a wider trend against freedom of expression. Last month the country cracked down heavily on social networks, ordering internet service providers (ISPs) to block hundreds of websites the government claimed added to deadly communal tensions in Assam. Under government pressure, Facebook pledged to remove content, block pages or even disable account of users who upload content that incites violence or perpetuate hate speech. In a desperate bid to quell tensions, the Indian government also banned SMS messages directed to more than five recipients.

Earlier this year, Trivedi’s own website, cartoonsagainstcorruption.com, was suspended after a complaint from a Mumbai lawyer that it showcased “defamatory and derogatory” content.