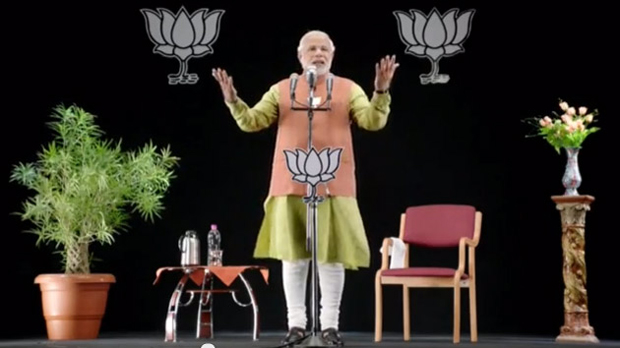 Indians don’t usually take much notice of the prime minister’ speech on independence day in the middle of August. This year was different. This year there was so much discussion on social media that it became a trending topic.

In contrast to the way other prime ministers have handled this moment, new Prime Minister Narendra Modi of the Bharatiya Janata Party (BJP), wowed a large section of Indian society not just with what he said, but the way he said it. People are gushing over the fact that he spoke without notes, and did not use the usual bulletproof glass. Others are impressed with the content; he touched upon topics as diverse as rape, sanitation, manufacturing, and nation building, using easily accessible language. Modi is also using social media to get his views across direct to the public, and bypassing the mainstream media.

This straight-talking style only adds to Modi’s brand, but he is also attracting criticism from the mainstream media for not being willing to answer hard questions. His chosen methods of communicating with the public have one common thread: he prefers to address the public directly, plainly, without going through the mainstream media or any reliance on further explanation by them. His social media accounts on Facebook and Twitter have completely changed the way information comes out of the prime minister’s office (PMO). Modi’s tweets, both from his personal and his prime ministerial account, keep citizens updated on his various trips (“PM will travel to Jharkhand tomorrow. Here are the details of his visit”). He also updates on his musings (“I am deeply saddened to know about Yogacharya BKS Iyengar’s demise & offer my condolences to his followers all over the world”) and highlights from speeches made across the country  (“when the road network increases the avenues of development increase too”), as well as photographs and videos. Citizens are getting a front row seat at his speeches and thoughts. But not everybody is happy about this — especially not the private mainstream media.

Unlike the previous government, Modi is yet to appoint a press advisor. That person, normally chosen from senior journalists in New Delhi, advises the prime minister on media policy. There isn’t a point person from the PMO for the mainstream media — or the MSM, as it is called — to discuss stories and scoops. He only takes journalists from the public broadcasting arms — radio and TV — on his foreign trips, in contrast to his predecessor, who brought along more than 30 journalists from the public and private channels. In fact, Modi has reportedly instructed his MPs to refrain from speaking to journalists. Indian mainstream media is filled with complaints that Modi is denying journalists the opportunity to engage with complex subjects like governance beyond official statements and limited briefings. Meanwhile, some other publications have scoffed that the mainstream media is only complaining because it will be forced to analyse the news and work towards coherent reporting instead of relying of well honed cosy relationships with people in power.

This apparent rift between the PMO and the private mainstream media has to be viewed through a variety of prisms for it to make any sense. The first is the very volatile relationship between Modi and the MSM which harks back to his time as chief minister of Gujarat, when a brutal communal riot took place. The second is the state of the mainstream media itself, continuously called out for unethical practices by the likes of the Telecom Regulatory Authority of India.

The relationship between Modi and the mainstream media is complex. No court has indicted Modi for any criminal culpability in the Gujarat riots of 2002, but many in the media have held him morally responsibly for the mass killings that carried on over three days, and let their feelings colour reports on him. But right before Modi’s historic sweep of the Indian general elections, this section of the press seemed to have begrudgingly warmed to the man they had long vilified.

One of India’s most respected journals, Economic and Political Weekly, published the article Mainstreaming Modi, deconstructing this new wave of coverage. It argued that the reasons for this change “range from how even the United Kingdom and the European Union have ‘normalised’ relations with him [Modi], that he has been elected thrice in a row to the chief ministership of Gujarat, which surely speaks of his abilities as an ‘efficient’ and ‘able’ administrator, that Gujarat has become corporate India’s favourite investment destination, and most importantly, that he is the guy who can take ‘decisions’ and not keep the nation waiting for action.”

During this year’s election campaign, Modi’s use of the media was innovative. Stump speeches were tailor made for the towns he was campaigning in. Modi’s 3D holograms, deployed in small towns while gave a speech elsewhere, were a spectacle not seen before in India. Though Modi had been speaking to Hindi and other Indian language media, he delayed giving interviews to the English language “elite” media, watched by a small but influential section of the population. He finally consented to doing a one-on-one interview with Arnab Goswami of Times Now, known as one of India’s loudest and most aggressive anchors. People readied themselves for the ultimate combative hour on television, but Modi’s no-nonsense answers, it seemed, won over both the anchor and the audience — especially as they were in sharp contrast to the vague statements put across by Modi’s challenger, Indian National Congress Party candidate Rahul Gandhi.

After the election win, India’s mainstream media has been forced to reassess what it wants from the prime minister. Is it information or is it access? The mainstream media undoubtedly has had a very complicated and close history with the political class. A Congress-led government has been ruling New Delhi for a decade, building up close relationships with senior editors and journalists. Some of these relationships were exposed through leaked conversations between members of the press and corporate lobbyists in a scandal now known as the Radia Tapes. They revealed, among other things, how journalists used their connections to politicians to pass on messages from lobbyists.

In fact, the indictment of improper behaviour by the media is a fairly regular occurrence in India. Just this month, the Telecom Regulatory Authority of India released their latest report, which recommends that corporate and political influence over the media can be limited by restricting their direct ownership in the sector. For this reason, the credibility and true affiliation of the media is always under the scanner.

But Modi and his team also need to respond to questions about why they will not deal with some parts of the media. How do they view the role of a combative media? Is only the public broadcaster, which reports the story as the government wants, to be allowed access? Are critical questions being avoided?

Perhaps, the last word can go to Scroll.in, one of India’s newest online magazines: “[T]he rat race for the ego scoop undermines the most important scoop, the thought scoop. We often don’t look at the big picture, don’t take the long view, don’t see the obvious, forget the past, don’t study the boring reports, substitute access journalism for ground reporting, believe the official word. Narendra Modi might just be doing us a favour by keeping us away.”

This article was posted on August 27, 2014 at indexoncensorship.org