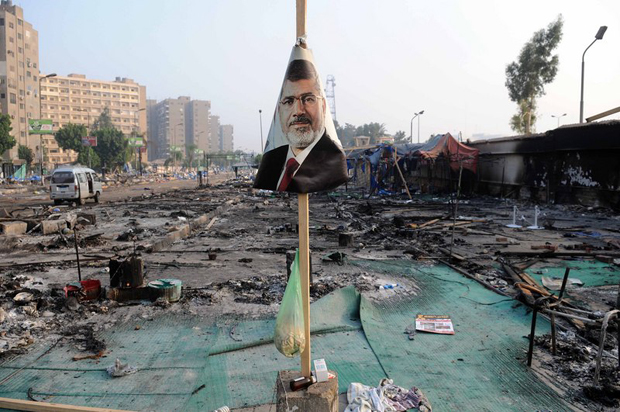 Nearly 1,000 people have been killed in Egypt in a week of deadly violence that began with a brutal security crackdown on Islamist protesters staging two sit ins in Cairo to demand the reinstatement of the country’s first democratically-elected president Mohamed Morsi . Six weeks earlier, Morsi had been removed from office by the military after millions of Egyptians took to the streets calling on him to step down and hold early presidential elections. Ever since the military takeover, hundreds of Muslim Brotherhood supporters have been killed or arrested as the Egyptian military and police pursue what they describe as an “anti- terrorism drive”.

The majority of Egyptians have expressed their support for the military and police , cheering them on in their sweeping campaign “to rid the country of the scourge of terrorism” and at times, launching verbal and physical attacks on the pro-Morsi protesters. Islamist supporters of the deposed president have meanwhile continued to stage rallies across the country, condemning the violence.

Egyptian media has also chosen to side with the country’s powerful security apparatus and has consistently glorified the military while demonizing the toppled president’s supporters. The text “Together against terrorism” appears on the bottom corner of the screen on most state and independent TV channels. In this bitterly polarized and often dangerous environment, it is the journalists covering the unrest that are caught in the middle, facing detention, intimidation, assault and sometimes, even death.

Tamer Abdel Raouf, an Egyptian journalist who worked for the state sponsored Al Ahram newspaper last week became the fifth journalist to die in the unrest when he was shot by soldiers at a military checkpoint “for failing to observe the nighttime curfew.” Abdel Raouf had been driving in Al Beheira when he was ordered by soldiers to turn back. While the soldiers claim he did not heed the warnings , another journalist accompanying him in the car said that Abdel Raouf had in fact been making a U turn when the soldiers fired their guns , instantly killing him. Prior to his death, he had persistently criticized the manner in which “the legitimate” president was ousted.

Other Egyptian journalists critical of the coup have meanwhile, faced intimidation and threats. The handful of Egyptian journalists who have remained unbiased, refusing to take sides in the conflict, have faced the wrath of  an increasingly intolerant public that has labelled them “traitors” and “foreign agents.”  A reporter working for an international news network who chooses  to remain anonymous, told Index she had received threats via her Facebook account urging her to “remain quiet or be silenced forever.”   The messages were sent by people claiming affiliations  with Egypt’s security apparatus including the Egyptian intelligence , she said. “You will be made to pay for your stance,” read one message while another warned she would be physically attacked for being “a traitor and an enemy of the state.”

However, it is Western journalists that are bearing the brunt of the mounting anger in the deeply divided nation. The government has accused them of “being biased” in favor of the Islamists and of failing to “understand the full picture”.

“Some Western media coverage ignores shedding light on violent and terror acts that are perpetrated by the Muslim Brotherhood in the form of intimidation operations and terrorizing citizens,” a statement released by the State Information Service (SIS), the official foreign press coordination center said. SIS officials have also affirmed that no ‘coverage authorizations’ would be granted to foreign journalists unless they receive prior approval from Egyptian intelligence –a marked shift meant to restrict coverage to “journalists who have not ruffled the feathers of the authorities,” an SIS official who does not wish to be named, disclosed.

Meanwhile, in recent meetings with representatives of foreign media outlets, Foreign Minister Nabil Fahmy and presidential spokesman Ahmed Mosslemany have accused the Western press of conveying a “distorted image” of the events in Egypt. They urged the journalists to rein in their criticism of the government and to try and “see the full picture”.  “Why is the Western media not covering the ‘terror’ acts committed by the Muslim Brotherhood including attacks on churches and police stations instead of devoting their coverage to assaults by security forces on pro-Morsi protesters?” they quizzed.

Western journalists deny that their coverage has been one-sided insisting that they had travelled to southern provinces where  sectarian violence is rampant. Several foreign reporters have  meanwhile, been subjected to harassment, assaults and detentions by security forces and popular vigilante groups while covering the recent clashes between pro-Morsi protesters and security forces.

Last Saturday marked a day of increased violence against Western journalists with at least six foreign correspondents reporting harassment and assaults while attempting to cover the siege on a mosque in downtown Cairo where pro_Morsi protesters had sought refuge after clashes with security forces. Two foreign journalists –the Wall Street Journal’s Matt Bradley and Alastair Beach, a correspondent with the Independent –sustained minor injuries when they were attacked by assailants outside the mosque but army soldier momentarily intervened, shielding them from the angry mob and dragging them to safety. Patrick Kingsley, a correspondent for the Guardian, was meanwhile, briefly detained and questioned by several suspicious vigilante groups and by police as he attempted to cover the mosque siege on Saturday. He later complained on Twitter that his equipment –including a laptop and cell phone– was seized in the process.

Abdulla Al Shami, a correspondent with Al Jazeera who was detained on Wednesday 14 August while covering the security crackdown on the Rab’aa pro-Morsi sit in, remains in police custody at an undisclosed location, according to the New York-based Committee for the Protection of Journalists. Mohamed Badr, a photographer working for the news channel has meanwhile been in detention since July 15 on the charge of possessing weapons—an accusation denied by Al Jazeera. Moreover, the offices of Al Jazeera Arabic were ransacked and shut down by police last week . Egyptian authorities are considering suspending Al Jazeera Mubasher’s license, accusing the network of “a clear pro-Morsi bias ” according to state owned Al Ahram newspaper.  Many Egyptians are also accusing  Al Jazeera of “inciting violence “ and of “threatening national security.”

The stepped up attacks on foreign journalists come at a time when the new interim government faces a chorus of international condemnation over its handling of the current political crisis. Clearly determined to crush the Muslim Brotherhood , the authorities remain defiant rejecting all attempts at reconciliation with the Islamists as “meddling in the country’s  internal affairs.” Anyone remotely suggesting that the military should reconcile with the Muslim Brotherhood, the long detested arch-enemy, is  accused of being a “traitor” and a “threat to the nation’s security”. Hence, the legal complaints recently filed against Vice President for Foreign Affairs Mohamed El Baradei who resigned his post earlier this month after security forces forcibly broke up the pro_Morsi sit ins.

In the divided country, Egyptians have adopted an uncompromising attitude of “you are either with us or against us”. The government has meanwhile encouraged such attitude by praising and rewarding “the patriots”. In such an atmosphere, there is no room for objectivity and any neutral media that reports without bias is accused of being pro-Islamist and perceived as “the enemy”.

Reverting back to Mubarak-era tactics,  the government is determined to silence the voices of dissent.