Pope Francis' remarks about gays and Catholicism left some in Brazil hoping for more dialogue, but drew criticism from some equal rights leaders. 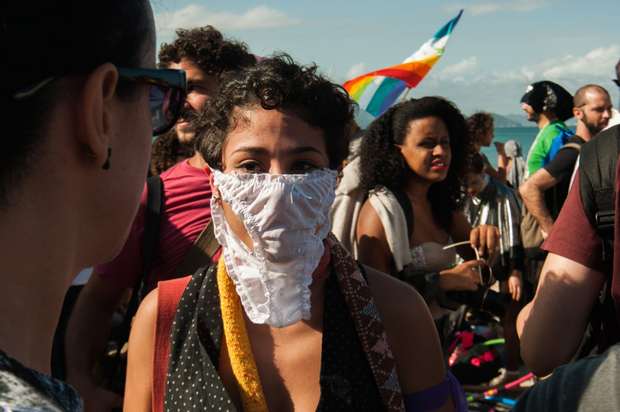 A demonstrator disguises her face during a the “March of the Sluts” in Rio de Janeiro. (Photo: Vito Di Stefano / Demotix)

“If someone is gay, and seeks God’s good will, who am I to judge?”, he told reporters on his flight back to Italy on 28 July.

Frei Betto, one of Brazil’s most prominent members of Liberation Theology – a leftist religious trend created in South America in the 70’s – hopes that the Pope’s remarks about the gay community can start a new phase of dialogue.

“With Francis, the themes of sexuality could be discussed in the church with greater freedom and integrity,” he said in an interview.

However, Francis could not escape criticism from leaders of Brazil’s gay movements.

“During the debate on equal marriage law in Argentina, (Jorge Mario) Bergoglio acted as an extremist leader. He said the bill was a plot of the devil to destroy God’s plan and called for holy war”, says deputy Jean Wyllys, recalling the attitude of the pontiff back in 2010, when he was archbishop of Buenos Aires.

“Pope Francis is even worse that pastor Feliciano, because he is much more powerful, richer and smarter”, says Bahia’s Gay Group president Luiz Mott, in a reference to federal deputy and pastor Marco Feliciano, president of the Chamber of Deputies’ Human Rights Committee and famous for his homophobic remarks.

“(Francis) began his pontificate with two deeply antigay attitudes: he canonized Pope John Paul II, the biggest homophobe in the 20th century, and signed along with Pope Benedict XVI his first encyclical, which condemns gay families.”

Frei Betto concedes that most Catholics still feel cautious about more controversial issues like gay marriage, but he believes that the pope “opened an important door” to gay people.

“He took the theme out of the closet. He also supported the demonstrations, emphasizing that young people should protest, and criticized the idolatry of power and money.”

The pope spoke about the demonstrations that have broken out in Brazil’s major cities since early June. Addressing cultural and business leaders at Rio de Janeiro’s Municipal Theater, Francis said that constructive dialogue is “essential to face the present,” in a clear mention to the protests.

“Between selfish indifference and violent protest, there is an option whenever possible: dialogue. Dialogue between generations, the dialogue with the people, the ability to give and receive, remaining open to the truth,” Francis said.

Later, speaking to 3 million people on Copacabana beach, he expressly urged people to go on protests, saying that those who want to be “protagonists of change” should “overcome apathy”, though in an orderly way. “Go out the streets!”, Francis exclaimed to the crowd.

However, while the Pontiff spoke, a few hundred protesters gathered in the “March of the Sluts”, walking the boardwalk of Copacabana Beach carrying placards in favor of abortion and women’s and gays’ rights. Some women walked down the street topless, while a group smashed figures of the Virgin Mary.

“The pope supported the demonstrations, but I don’t think he learned about the March of the Sluts, which I consider disrespectful to the Christian faith, by stepping on crucifixes and such”, says Frei Betto.

Theologian Leonardo Boff, another prominent Liberation Theology figure in Brazil, says the Pope’s humbler approach led to a more understanding view of the protesters, by defending young people’s “utopia” and “the right of them to be heard”.

“The biggest legacy is the figure of Pope Francis: a humble servant of faith, deprived of all pomp, touching and letting others touch him, speaking the language of young people and (telling) the truth with sincerity”, he posted on his blog.

Francis had arrived in Brazil on 22 July where he led World Youth Journey, an international Catholic event hosted in Rio de Janeiro. Hundreds of thousands of Catholics from all over the world flocked to Rio in order to have a closer look at the Pope, who assumed a more straight-forward, simpler approach towards followers than his predecessor, Benedict XVI.