From the standpoint of the investigations, this is a confusing story, with different versions of events coming from the media and the police 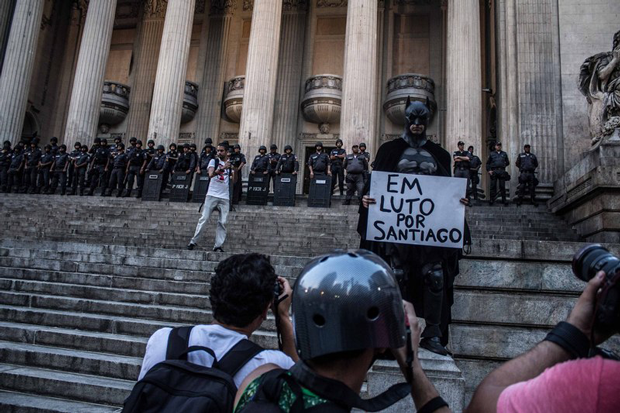 Rio’s Batman honours the recently deceased network cameraman Santiago Andrade, who died after being hit in the head with fireworks released by black bloc activists during a protest on February 6. (Photo: Leonardo Coelho / Demotix)

The death of Santiago Andrade on 10 February, a cameraman for Brazil’s Bandeirantes Network, from injuries he suffered while filming a Rio de Janeiro transport price protest has shocked the country.

In the uproar that followed, two protesters — Caio Silva de Souza and Fabio Barbosa Raposo – were arrested for targeting Andrade with fireworks. The media quickly filled with editorials and coverage that declared democracy was at risk. Journalists described the attack as a grave threat to freedom of expression and criticism of police handling of the protests. One op-ed even accused a leftist party deputy of links with the attack without presenting evidence.

However, there is a lack of preparation from the Brazilian press itself, when covering the demonstrations. This deficiency was highlighted by a BBC reporter who provided first aid to Andrade. Brazilian journalists usually cover protests without identification vests, protection or training.

Violence against the press is not a new problem in Brazil. There have been 126 attacks on journalists by police or demonstrators since the mass protest movement began in June 2013. It is common for journalists’ cars to be targeted by protesters. At the same time, it has been reported that journalists have been murdered for political reasons.

The attack on Andrade was the fourth episode of violence against journalists during protests in 2014. On 25 January, two reporters were injured in São Paulo — EFE reporter Sebastião Moreira and freelancer Paul Alexander were attacked by the police. UOL News reporter Gustavo Maia was assaulted by police on 6 February — the same day Andrade was injured.

The death of the cameraman happened at the same time the Brazilian Congress — with the backing of the federal government — was attempting to quickly pass two controversial bills against terrorism. The public reaction was overwhelmingly negative. The justice department is likely to present a new bill to congress. While the bill has not yet been published, it is said to provide stricter punishment for violent infiltrators in demonstrations, in addition to standardizing police responses throughout Brazil. The Minister of Justice, José Eduardo Cardozo, also met with representatives of the media and promised action to protect reporters.

Several national and international organizations expressed concern over the Andrade attack. The International Federation of Journalists (IFJ) and Reporters Without Borders called on the Brazilian authorities to guarantee the safety of journalists covering demonstrations. The UN expressed concern about violent protests and the “excessive use of force and arbitrary arrests of demonstrators and journalists by police forces”. UNESCO pleaded with Brazilian media groups to train their employees working in hazardous environments. The Brazilian Association of Investigative Journalism (Abraji) released a statement condemning the  the attack and urged the Brazilian government to protect journalists and freedom of expression. The International Press Institute (IPI) recalled various crimes against Brazilian journalists and insisted that investigation of crimes against journalists be a priority for the government.

Brazil’s president Dilma Rousseff expressed her grief on Twitter. She said the death of Andrade “revolts and saddens” and stressed that “freedom of expression cannot be used to threaten life”. In an official statement, the Secretary of Human Rights of the Presidency said that “this case unfortunately tragically symbolizes the systematic violence against communication professionals engaged in covering demonstrations”.

From the standpoint of the investigations, this is a confusing story, full of questions, with different versions of events coming from the media and the police.

The lawyer for the men arrested for detonating the rocket said the two were recruited by, and received money from ,“activists”. The Civil Police claims there are infiltrators in protests that are paid by political parties of the extreme left.

The governor of Rio de Janeiro, Sergio Cabral, also said that “there are political parties and organisations embedded in these violent actions”.

Is there cooptation of popular movements? There is no evidence of it. Is Brazilian democracy facing a crisis? It seems that nobody wants to be responsible for the answers.

While the press is mourning the loss of yet another one of its own, there needs to be time to ascertain the facts rather than lob accusations when tensions are high. The press needs to investigate and confirm or deny the official line directed against the left or nothing will come from the death of a colleague symbolised by the cameras placed in front of the congress.