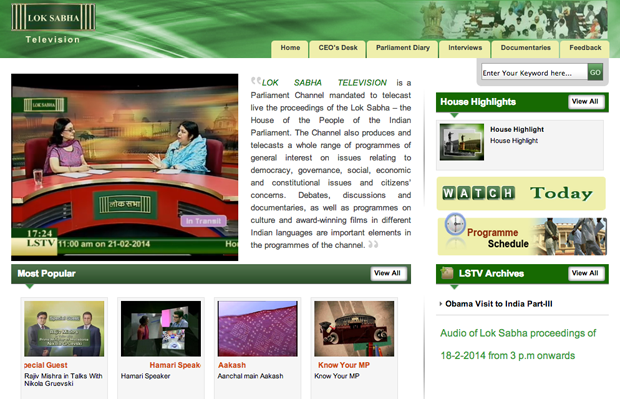 India’s lower house of parliament – the Lok Sabha – though capable of witnessing introspective and impressive debates, is often in the news because of the bawdy and boisterous behaviour of its elected members. Obstructionist behaviour – unacceptable in streets, schools and other workplaces – is employed to register protest, all under the watchful eye of Lok Sabha TV – a government channel dedicated to broadcasting the proceedings. The transmission is used by private TV channels, to report on important debates of the day, but most often to highlight “unparliamentary” behaviour.

Only last week, a member of parliament from Vijaywada, Andhra Pradesh used, not logic or reason, but pepper spray on fellow parliamentarians to protest the tabling of the “Andhra Pradesh Reorganisational Bill”. Just five days later, on 18 February, the same bill was tabled in parliament amidst much uproar, and the house was adjourned three times due to disruptions. Then, around 3:18pm, the bill was tabled on the floor of the house, but the live proceedings that usually accompany it were “blacked out”. The government called it a “technical error” while the leader of opposition in the lower house, Sushma Swaraj of the BJP, called it a “tactical error”. Thus, for the first time in its history, the lower house of Indian parliament passed a law as important as creating a new state – by reorganising Andhra Pradesh into two states; Andhra Pradesh and Telangana – away from the media glare and the public eye. The upper house has also passed the Telangana bill, which the president — a Congress appointee — is expected to sign.

The history behind the controversial bill is long and emotional; however in a nutshell, the demand is to carve out a new state from the existing state of Andhra Pradesh, which would absorb the current state capital of Hyderabad. Protestors against such a move have argued that bifurcation would cause detriment to new Andhra Pradesh, also known as Seemandhra, as the more developed city of Hyderabad, water bodies and income opportunities would no longer be easily accessible to them. They also believe that they would be more vulnerable to the threat of naxalism, a communist ideology. The protests have been raging since 2011, which have seen many incidents of violence, vandalism, arson, ransacking, petrol bombs, tear gas, and most recently, pepper spray.

The history behind protests in the well of the house leading to disruptions and adjournments over crucial issues, of course, extends well beyond the issue of Telangana. In 2013, a report by the Times of India indicated that since the 1950s, the hours spent working in the Lok Sabha have been gradually decreasing; from about 3784 hours on average between 1952-57 (during the 1st Lok Sabha session) to 1157 hours since 2009 (the current and 15th session of the lower house). Lok Sabha floor management seems to be dismal, resulting in critical legislation still pending consensus. Further, members seem to be “trying to impress their voters back home with their commitment to the cause they are espousing” by their interruptions, using the live broadcast of Lok Sabha to their advantage. The infamous pepper spray incident wasn’t just about the MPs who were wheeled off to the hospital. Glass screens on the tables were smashed, microphones were uprooted, papers flew everywhere, and the parliamentarians were in fisticuffs with each other. The images of the day shocked the media and viewers alike, with reports calling it a “day of shame”.

On 17 February, a day before the “black out” the Indian Express reported that the government had made arrangements for the Finance Minister P. Chidambaram to read out the 2014-15 Interim Budget in the Lok Sabha TV studio, should the MPs disrupt the proceedings once again. The report also stated that: “If the speech is read from the studio, it would be the first such instance. Government managers said they hope the step won’t be necessary, but have alerted the studio authorities to be prepared.” Luckily for him, the house listened with minor interruptions and passed the bill.

However, it was just the next day that the government chose to manage the disruptions in the lower house, caused by the tabling of the Telangana bill, by ordering Lok Sabha TV to stop both, broadcasting the proceedings of the House and transmitting its live feed to other private media channels. The Economic Times reports that: “The House looked like a virtual battle-ground during the 90-minute proceedings as members resorted to slogan-shouting to protest against passage of the bill. Live telecast by Lok Sabha TV was stopped, perhaps the first time.” Many members of parliament called it a “black day” in the country’s democracy, and others likened the move to the heavy censorship employed during India’s Emergency, when Prime Minister Indira Gandhi heavily censored the media. Despite a statement from Lok Sabha TV’s CEO who has called it a “snag”, the Parliamentary Minister, Kamal Nath, confirmed that the black out was “a decision of the Lok Sabha secretariat”. There are hints that the opposition, while protesting the black out loudly in public, knew about the plan to stop transmission.

Congress Minister Rajeev Shukla defended the move by saying that the media gallery was open, therefore there was no intention to keep anything behind closed doors. Congress spokesperson Abhishek Manu Singhvi stated in a TV interview that, “why is so much noise being about the live transmission? Eight years ago there was no live coverage. Does it mean parliament didn’t function or people did not speak? There were 200 correspondents were in the press gallery who were witness to what happened during the passage of the bill.” Others, on the winning side, like Telangana supporter KT Rama Rao felt that “people have no problem if the TV channels did not receive their TRPs. The Speaker might have decided to stop the telecast to save some lives at the moment when emotions were high.”

In an interesting analysis, Sevanti Ninan, of the Hoot, looks back at the role of Indian media in creating and sustaining movements such as Telangana. She writes: “In the case of Telangana, newspapers and TV channels have come into existence in the last few years primarily to articulate the statehood demand. If the media pre-2009 was owned largely by businessmen and politicians from the Andhra region, there are now entrants such as T News, V-6 and others on the Telangana side of the divide.” In fact, such was their role that in January 2010, the Andhra Pradesh High Court observed that “on account of some of these abusive visuals, people are becoming violent…”

Therefore the issue boils down to a few either/or questions. Did the Speaker of the House cancel the broadcast on purpose, and if yes, in today’s television era, is the move justified? Do people have a right to see how their MPs behave in parliament – good or bad – or does the Congress argument that other forms of media can report on the proceedings of the House hold water? Is this a dangerous precedent set by the ruling UPA? Is the move to simply deny private channels/political parties who oppose the government’s position their TRPs for the day, by cancelling live footage of the ruckus of the House? Can the Lok Sabha simply choose to switch off live proceedings in order to pass a contentious bill, or can this be categorised as “floor management”?

And the elephant in the room – without the free publicity by Lok Sabha TV cameras, did the MPs finally get down to actually doing the work — vote — that they are meant to instead of prolonged disruptions?

This article was published on 20 February 2014 at indexoncensorship.org