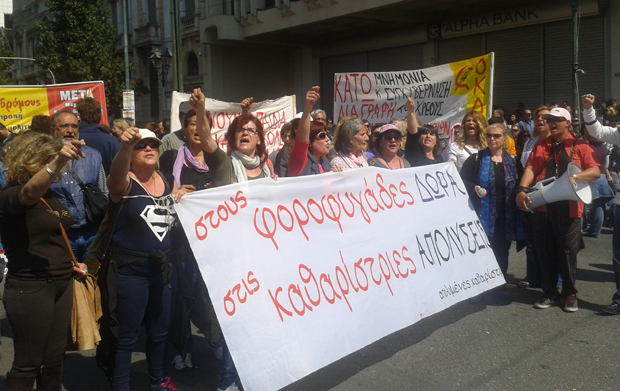 Greek protesters voiced their opposition to further austerity measures on Wednesday 9 April as Greece returned to international finance markets. (Photo: Christos Syllas for Index on Censorship)In a televised address last Thursday, Greek Prime Minister Antonis Samaras thanked the Greek people for the sacrifices they endured during the past four years as the country underwent the harshest austerity measures since emerging from World War II.  While hailing the country’s return to the international finance markets after a four-year absence, the prime minister and the coalition government glossed over policies that have resulted in a negative environment for free expression — whether through protests or the press.

Along with the “world of labor” being constantly undervalued, the policies put in place are having a huge impact on the freedom of speech. In a more precise manner, the non-dominant anti-state and anti-government political discourse produced by certain political spaces such as the radical left and anarchists poses a serious threat to the government propaganda. Political dissidents are being targeted, arrested and systematically abused for protesting against the government. At the same time, press freedom is under attack when attempting to speak about the costly agreements with the troika. Also, recent struggles for education came face to face with police interference and student profiling.

The economic implications of the Greek austerity drive are falling mostly on the working class, who are losing hard won benefits without their unions taking a clear stand against the rollbacks. The government is currently legislating a new round of liberalization measures.

On 9 April, an anti-austerity strike was held in Athens with thousands of people rallying against government policies. Although the strike lacked the mass participation and intensity of past rallies, as in 2012, demonstrators managed to manifest their dissent against sweeping socio-econonic measures.

Workfare policies through voucher programmes, initially introduced as a government solution to unemployment, exploit the large reserve of unemployed while undermining the ability to collectively bargain working conditions and pay.

“It is a dead end. If you take a closer look today -a day of strike-, you will see that many coffee shops and sales shops are open. Austerity measures, up to now, seem to be effective in dividing working class people and overturn any social struggle. There’s still a long way to fight properly…”, a 29 year-old protester, who has been unemployed for two years, told Index on Censorship.

Human rights abuses against immigrant workers — the most undervalued part of workforce in Greece — confirm the agenda of a police state flirting with racism and xenophobia.

The dramatic escalation of refugee and migrants’ mistreatment, both by the state and the banned neo fascist party Golden Dawn is indicative. In a recent provocation some Golden Dawn followers organized an intimidating gathering outside the offices of Medecins du Monde, an NGO that provides medication and healthcare services to immigrants as well as Greeks.

However, mainstream media outlets have failed to report on the contradictions that arise from Golden Dawn’s background and relationships. Index on Censorship has thoroughly reported on the affinities of the right and the far-right political spectrum and has identified some key actors that connected ruling party New Democracy with Golden Dawn. One of them, was the former cabinet secretary Panayiotis Baltakos.

Baltakos was recently forced to resign over a leaked video, which showed him having a conversation with the spokesman of Golden Dawn Ilias Kasidiaris. In the video, Baltakos admitted that the government had to press judges to prosecute Golden Dawn’s former members of parliament.

It is worth noting that a year ago, Baltakos had allegedly said that cooperation between New Democracy and  Golden Dawn in upcoming elections is “undesirable but not an unlikely possibility”.

The continuous flirting between the ruling New Deomocracy and the now-banned Golden Dawn either takes the form of a “relationship” or of a “conflict”. It is shaping the news agenda and it sets the tone ahead of the European and local elections in May.

In an e-mail interview that took place in January, Index asked Cas Mudde, assistant professor in the Department of International Relations at the University of Georgia, in whose interest is the threat of the far-right is working.

“I would expect that the far right today wins mostly from mainstream right-wing parties – in many countries they won over the left-wing voters in the late-1980s/early-1990s. At the same time, they often attract many new and former non-voters, who would probably traditionally have gone to the center-left”.

Mudde also claims, among other things, “that European politicians use the alleged threat of a far right resurgence, backed by the economic crisis thesis, to push through illiberal policies”.

In this context, on 11 April, German Chancellor Angela Merkel visited Athens. Aside from the mainstream media’s enthusiasm for the return to financial markets, few read between the lines. Merkel’s visit was a sign of support for the Greek government’s austerity measures – despite what the Greek public thinks

Experts warn that even now that “the mood has changed”, the debt crisis and the consequent austerity measures do not necessarily come to an end.

This article was published on 16 April 2014 at indexoncensorship.org