NEWS
Bahrain: Calls for release of Nabeel Rajab on global day of solidarity 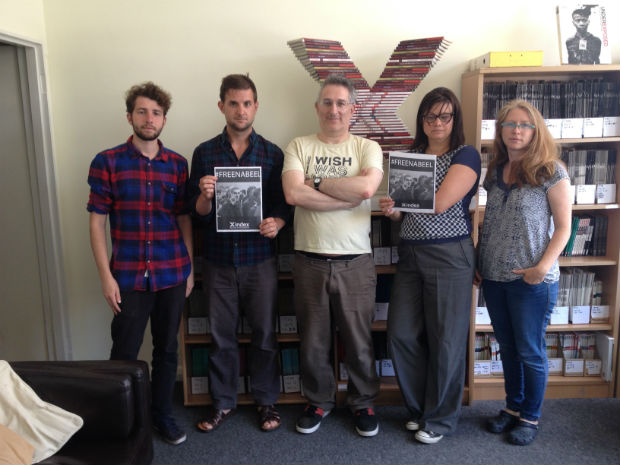 Index on Censorship are taking part in a day of solidarity for imprisoned Bahraini activist Nabeel Rajab on Thursday 9 July. The day was organised by Nabeel’s son Adam, and participants from across the world are sharing videos, photos and messages of encouragement using the hashtag #FreeNabeel.

Rajab is the President of the Index award-winning Bahrain Centre for Human Rights (BCHR) and among the Gulf region’s most well-known human rights activists. Since the Bahraini uprising of 2011, he has been arrested on numerous occasions and had his house tear-gassed for leading protests in which he and others voiced criticism of the Bahraini government.

Having been imprisoned between August 2012 and May 2014, Rajab was once again arrested in October 2014 and charged with “insulting a public institution”. His crime related to tweets in which he alleged that some Bahraini soldiers may have defected to the Islamic State, referring to Bahraini institutions as “ideological incubators”. In May, his six-month prison sentence was upheld.

The solidarity day has been arranged to tie in with a European Parliament vote on an urgent resolution on Bahrain.. The resolution calls for “the dropping of charges and immediate and unconditional release of all human rights defenders, political activists and other individuals detained and charged with alleged violations related to the rights of expression, peaceful assembly and association, including Nabeel Rajab, Sheikh Ali Salman and the ‘Bahrain 13’.” It also calls on the EU to develop a strategy on how they can push for the release of imprisoned activists and prisoners of conscience in Bahrain, and for the ending of exports of tear gas and crowd control equipment to the country.

Bahrain has an appalling human rights record which has worsened since the events of the Arab Spring in 2011. Its penal code of 1976 has been widely criticised as giving widespread powers to the government to suppress dissent, and Reporters Without Borders placed the country on its list of Internet Enemies in 2012 due to its crackdown on online blogging and social media use by activists such as Rajab. The “Bahrain 13”, as they are referred to in the EU resolution, are a group of opposition leaders, activists, bloggers and Shia clerics who were arrested between March and April 2011 for their involvement in the national uprising. Their detainment has drawn criticism from a multitude of countries and organisations who have accused the Bahraini government of torture during trial. The government of Bahrain insists the trials were fair.

UPDATE: The European Parliament on Thursday 9 July adopted the urgency resolution on Bahrain.

You can help put pressure on the Bahraini government to respect and protect freedom of expression. Simply record a video or take a picture of yourself, calling on Bahraini authorities to release Rajab, using the hastag #FreeNabeel.

I know @Nabeelrajab as a leading #Bahrain HRD who should be released from jail immediately pic.twitter.com/l6KUDnQQdd

In solidarity with @NabeelRajab,a #Bahrain HRD I had the privilege to meet last year before his re-arrest.#FreeNabeelpic.twitter.com/ykgW7GPeWW

This article was posted on 9 July 2015 at indexoncensorship.org