To highlight the most pressing concerns for press freedom in Europe, Index's Mapping Media Freedom correspondents discuss the violations that stood out most 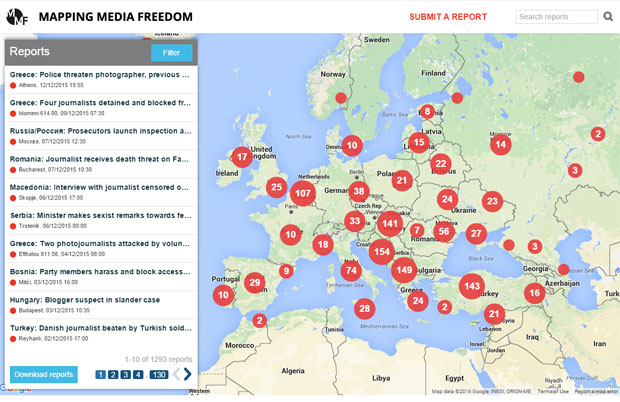 The attacks on the offices of satirical magazine Charlie Hebdo in Paris in January set the tone for conditions for media professionals in 2015. Throughout the year, Index on Censorship’s Mapping Media Freedom correspondents verified a total of 745 violations of media freedom across Europe.

From the murders of journalists in Russia, Poland and Turkey to the growing threat posed by far-right extremists in Germany and government interference in Hungary — right down to the increasingly harsh legal measures imposed on reporters right across the continent — Mapping Media Freedom exposed many difficulties media workers face in simply doing their jobs.

“Last year was a tumultuous one for press freedom; from the attacks at Charlie Hebdo to the refugee crisis-related aggressions, Index observed many threats to the media across Europe,” said Hannah Machlin, Index on Censorship’s project officer for the Mapping Media Freedom project. “To highlight the important cases and trends of the year, we’ve asked our correspondents, who have been carefully monitoring the region, to discuss one violation each that stood out to them.”

Belarus / 19 verified reports between May-Dec 2015
Journalist blocked from shooting entrance to polling station
“It demonstrates the Belarusian authorities’ attitude to media as well as ‘transparency’ of the presidential election – the most important event in the current year.” — Ольга К.-Сехович

Greece / 15 verified reports in 2015
Four journalists detained and blocked from covering refugee operation
“This is important because it is typical ‘attempt to limit press freedom’, as the Union wrote in a statement and it is not very hopeful for the future. The way refugees and migrants are treated is very sensitive and media should not be prevented from covering this issue.” — Christina Vasilaki

Hungary / 57 verified reports in 2015
Serbian camera crew beaten by border police
“These physical attacks, the harsh treatment and detention of journalists are striking because the Hungarian government usually uses ‘soft censorship’ to control media and journalists, they rarely use brute force.” — Zoltan Sipos

Italy / 72 verified reports in 2015
Italian journalists face up to eight years in prison for corruption investigation
“I chose it because this case is really serious: the journalists Emiliano Fittipaldi and Gianluigi Nuzzi are facing up to eight years in prison for publishing books on corruption in the Vatican. This case could have a chilling effect on press freedom. It is really important that journalists investigate and they must be free to do that.” — Rossella Ricchiuti

Lithuania / 9 verified reports in 2015
Journalist repeatedly harassed and pushed out of local area
“I chose it because I found it relevant to my personal experience and the fellow journalist has been the only one to have responded to my hundreds of e-mails — including requests to fellow Lithuanian journalists to share their personal experience on media freedom.” — Linas Jegelevicius

Macedonia / 27 verified reports in 2015
Journalist publicly assaults another journalist
“I have chosen this incident because it best describes the recent trend not only in Macedonia and my other three designated countries, Croatia, Bosnia and Montenegro, but also in the whole region. And that is polarization among journalists, more and more verbal and, like in this unique case, physical assaults among colleagues. It best describes the ongoing trend where journalists are not united in safeguarding public interest but are nothing more than a tool in the hands of political and financial elites. It describes the division between pro-opposition and pro-government journalists. It is a clear example of absolute deviation from the journalistic ethic.” — Ilcho Cvetanoski

Poland / 11 verified reports in 2015
Law on public service broadcasting removes independence guarantees
“The new media law, which was passed through Poland`s two-chamber parliament in the last week of December, constitutes a severe threat to pluralism of opinions in Poland, as it is aimed at streamlining public media along the lines of the PiS party that holds the overall majority. The law is currently only awaiting president Duda’s signature, who is a close PiS ally.” — Martha Otwinowski

Portugal / 9 verified reports in 2015
Two-thirds of newspaper employees will be laid off
“It’s a clear picture of the media in Portugal, which depends on investors who show no interest in a healthy, well-informed democracy, but rather in how owning a newspaper can help them achieve their goals — and when these are not met they don’t hesitate to jump boat, leaving hundreds unemployed.” — João de Almeida Dias

Russia / 37 verified reports between May-Dec 2015
Media freedom NGO recognised as foreign agent, faces closure
“The most important trend of the 2015 in Russia is the continuing pressure over the civil society. More than 100 Russian civil rights advocacy NGOs were recognized as organisations acting as foreign agents which leads to double control and reporting, to intimidation and insulting of activists, e.g., by the state-owned media. Many of them faced large fines and were forced to closure.” — Andrey Kalikh

Russia / 37 verified reports between May-Dec 2015
TV2 loses counter claim to renew broadcasting license Roskomnadzor
“It illustrates the crackdown on independent local media, which can not fight against the state officials even if they have support from the audience and professional community.” — Ekaterina Buchneva

Serbia / 41 verified reports in 2015
Investigative journalist severely beaten with metal bars
“It’s a disgrace and a flash-back to Serbia’s dark past that a journalist, who’s well known for investigating high-level corruption, get’s beaten up with metal bars late at night by ‘unknown men’.” — Mitra Nazar

Turkey / 97 verified reports in 2015
Police storm offices of Koza İpek, interrupting broadcast
“The raid on Bugün and Kanaltürk’s offices just days ahead of parliamentary elections was a drastic example — broadcasts were cut by police and around 100 journalists ended up losing their jobs over the next month — of how the current Turkish government tries to strong-arm media organisations.” — Catherine Stupp