Bolo Bhi: "What's important is the process, and that we keep at it"
13 Apr 2016
BY INDEX ON CENSORSHIP

I would like to thank everyone at Index on Censorship who has provided us with the opportunity to come here and speak about our work as well as meet with people who are fighting similar battles in their own countries. I would also like to thank whoever nominated us and all those who voted for us. It feels great to know the work we do matters to so many. That’s really what we want to achieve through our efforts: for the average citizen to get involved and take ownership — to take this on as their own fight.

Bolo Bhi hasn’t been around very long. My colleagues and I co-founded it in 2012 and we started out fighting a China-like firewall the then government of Pakistan wanted to install. Challenging government censorship, preventing the exercise of arbitrary and discretionary powers, pushing for greater transparency and openness in the policy-making and law-making process is at the very core of what we do at Bolo Bhi. As citizens, our right to know, question and speak our mind holds great importance to us.

Our most recent fight has been against the government’s proposed cybercrime bill which seeks to criminalise speech, award broad and discretionary powers to investigation agencies and empower the telecom regulator with content management powers online. Together with local industry associations, digital rights and civil society organisations and human rights group, as well as members of opposition parties, we’ve been able to hold off on the passage of this bill. This is a struggle that remains ongoing and it is a struggle many citizens are involved in around the world because of the kind of laws their governments are trying to usher in, in the name of protection and security. We need security and rights, and governments around the world need to understand it cannot be an either/or approach.

Many times in our struggles we get disillusioned because there are no visible results or quick victories. That shouldn’t be our benchmark. What’s important is the process, and that we keep at it. 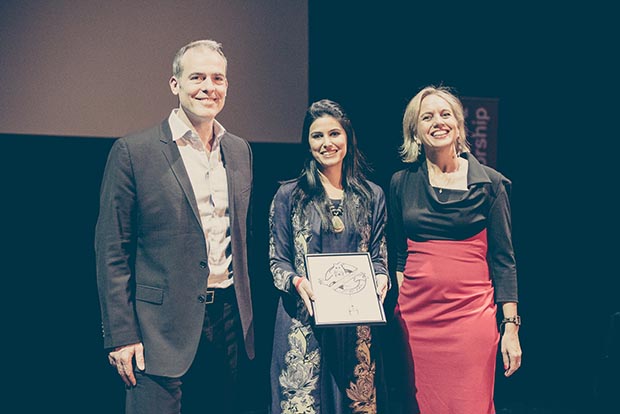 2016 Freedom of Expression Awards: The other acceptance speeches
Zaina Erhaim: “I want to give this award to the Syrians who are being terrorised”
GreatFire: “Technology has been used to censor online speech — and to circumvent this censorship”
Murad Subay: “I dedicate this award today to the unknown people who struggle to survive”
Smockey: “The people in Europe don’t know what the governments in Africa do.”