Zaina Erhaim: "I want to give this award to the Syrians who are being terrorised"
13 Apr 2016
BY INDEX ON CENSORSHIP

While journalists and citizens fled, Syrian-native Zaina Erhaim returned to her war-ravaged country and the city of Aleppo in 2013 to ensure those remaining were not forgotten. She is now one of the few female journalists braving the twin threat of violence from both ISIS and the president, Bashar al-Assad.

I am honoured to receive this award here today. I believe this is not for Zaina as a person, but to the Syrian journalists and citizen journalists who refused to be turned into propagandists to the Assad regime, instead they chose to report the truth and the facts despite the very high price of that.

That’s why here I should be mentioning my great friends and colleagues who are greatly missed, Obaida Battal who has been kidnapped by ISIL in Aleppo for more than three years, Ossama Hassan also abducted by ISIL in Raqqa for more than 2 years. We don’t know whether they are alive or dead.

Baseel Safadi, who won this award and is still being detained in the regime’s prisons for his activism.

Hasan Azhari, who was killed by Assad forces under torture in Latakia; Basel Shehad, killed in an Assadi air strike in Homs; Wasim Al Idel, killed by a Russian strike; and sadly the list is too long to be cited. Different means of killing and killers all for one cause, and one crime: Journalism, freedom of expression, echoing the silenced voices of Syrians demanding their freedom. 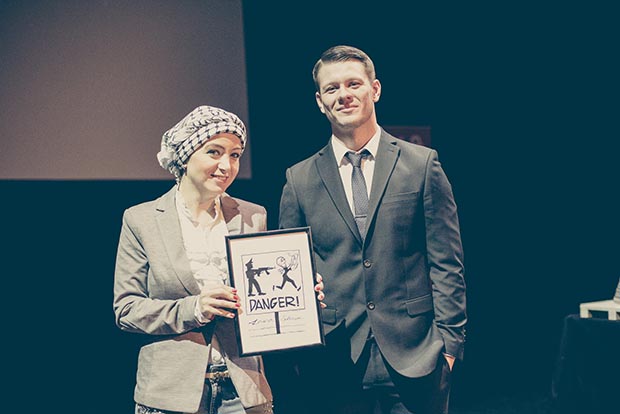 Those are the ones who I believe deserve all the honouring awards in the world.

I want to give this award to the Syrians who are being terrorised by one of the worst tyrants, ISIL, international jihadists and strikes, and above all those trying to flee and are being treated as potential terrorists themselves, and are being discriminated against for demanding justice, peace and a respected life in a free, democratic country.

This award is for the journalists and citizen journalists still taking this dangerous, difficult path, sacrificing everything, playing hide and seek with death to get the stories of the Syrian people out. So please keep your eyes on our news, pictures and videos, because great heroes are dying to get them to you.

2016 Freedom of Expression Awards: The acceptance speeches
Bolo Bhi: “What’s important is the process, and that we keep at it”
GreatFire: “Technology has been used to censor online speech — and to circumvent this censorship”
Murad Subay: “I dedicate this award today to the unknown people who struggle to survive”
Smockey: “The people in Europe don’t know what the governments in Africa do.”